Washington Examiner journalist Susan Ferrechio blasted CNN’s Brian Stelter for refusing to cover the Hunter Biden bribery scandal as thoroughly as he and CNN had hyperventilated over the debunked Russia-collusion hoax.

“The bottom line is, this deserves scrutiny by ALL media outlets, and if they pick and choose and decide it’s not worth their time, that’s showing real bias,” Ferrechio told Stelter on BBC Radio 4. Ferrechio made the statement after Stelter dismissed the Hunter Biden scandal as “last season’s episode.”

Ferrechio pointed out to Stelter that the public has the right to know if Democrat presidential candidate Joe Biden was using his political office to enrich himself through shady side deals concocted by his son, Hunter.

“This is not last year’s news,” Ferrechio explained. “It’s whether or not his son was coordinating to get him to talk to these Ukrainian oligarchs, and he was benefiting from it. It’s really dirty.”

Stelter replied: “I said it was last season. You’re saying it’s new. I think the bottom line is, we don’t know what is real and what is fake in these emails, if there is anything real in them.”

For the record, the Biden camp has not denied the authenticity of the emails uncovered on Hunter Biden’s laptop.

Ferrechio noted how hypocritical it was for Stelter to suddenly be concerned about the “authenticity” of the damning texts and emails on Hunter’s laptop when he never bothered to fact-check the slew of anti-Trump propaganda that he and his network, CNN, pushed for the past four years.

“Yeah, but that didn’t stop anyone from reporting Mueller and the [sham pee] dossier,” Ferrechio retorted.

Stelter then condescendingly mansplained, telling Ferrechio: “I know you’re bitter. I understand that you have a lot of resentment about that.”

Susan Ferrechio said it’s absurd for Brian Stelter and CNN to claim they now have journalistic ethics when they’ve destroyed their own credibility for the past four years by pushing anti-Trump, left-wing propaganda — that later get debunked.

A triggered Stelter shot back threateningly: “Don’t you dare! Don’t you dare act like newsrooms didn’t have ethics in 2017 and 2018.”

Ferrechio retorted: “You can ‘don’t dare’ me all you want, Brian, I’ve been doing this for 30 years, so say whatever you want. It’s my view, and I have a right to say it.”

In February 2020, a jury found Avenatti guilty on three counts of extorting Nike after he allegedly threatened to accuse the apparel giant of illegally paying amateur basketball players unless Nike paid him $25 million.

Avenatti was also found guilty of betraying his client (a youth basketball coach) by going behind his back to extort Nike for money to line his own pockets.

After elevating Avenatti as a left-wing hero, CNN’s Brian Stelter now claims to be concerned about “journalistic ethics.” 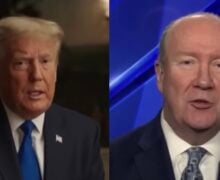