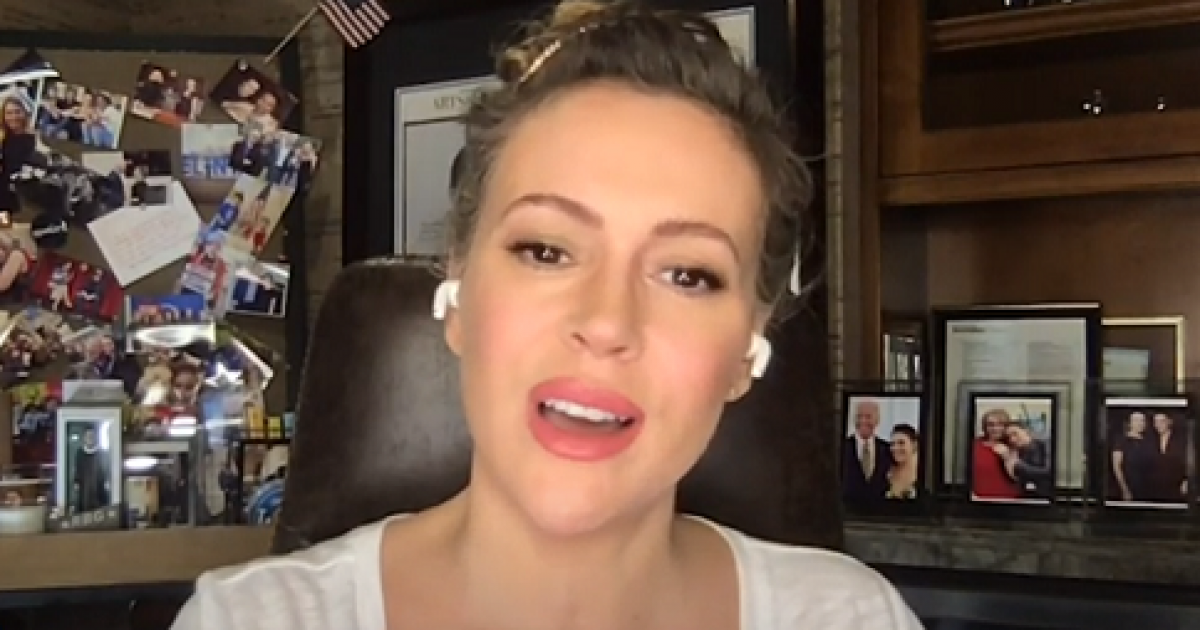 Actress Alyssa Milano, a vocal Defund the Police advocate, called the police Sunday — via her husband — when she thought an armed man was on her property in Bell Canyon, California.

According to photos obtained by Daily Mail, seven Ventura County Sherriff’s vehicles responded, along with a K-9 unit, the Los Angeles Fire Department and a helicopter.

The 8,000 square ft. home features five bedrooms and six bathrooms, and is worth $2.5 million, according to Fox News.

“We first noticed the helicopter circling overhead very low and knew something was going on, it’s usually such a quiet community,” a neighbor told the British newspaper. “Then we saw all the police cars parked in front of Alyssa’s home. They had their guns at the ready and seemed very serious.”

Another neighbor took exception to Milano’s efforts to defund the police.

“She can tweet those things because at the end of the day she lives behind gates in a gated community. She knows the police will come to save her,” the neighbor told the Daily Mail. “But what about all those people who don’t have that luxury and live in unsafe neighborhoods? She obviously doesn’t care.”

One such tweet is seen here, as Milano shared a video of John Oliver explaining that “defunding” police means shifting money to mental health services and community efforts, not eliminating police altogether.

A spokesperson for the Ventura County Sherriff’s Office told Fox News they received several calls from the area and that the initial call came from someone “not related to Alyssa Milano.”

Apparently, rightwing media & trolls have decided that they should target me because my neighbor called the police after seeing a person dressed in black holding a rifle behind my home where I live with my young children and husband. Here is my statement and what really happened. pic.twitter.com/RwnSd9XCs0

But the actress confirmed that her husband, talent agent David Bugliari, did call 911 after the neighbor — to “check on when police would be arriving.”

A few minutes later, Milano responded to a social media user to say she “never called the police.”

Correct. I never called the police. But I would have if I saw a guy with a gun in my backyard.

Milano said the family “sheltered in place” while police determined what was going on — which apparently turned out not to be a “man,” but a teen hunting squirrels with an air gun.

“These are exactly the type of situations that police officers are trained for and should be responding to, and we will always support police having the resources they need for appropriate policing actions,” she said in the release. “We’d love to see equally trained non-police professionals respond to addiction and mental health crises and non-violent events so that these brave officers can do the jobs they are so good at handling, as they demonstrated this weekend.”

As might be expected, the raging liberal played the victim when she was called out for her hypocrisy:

There were tweets sent out literally while we were in lockdown that make me feel it was all a set up. The disinformation campaign has begun. Vote. #NationalVoterRegistrationDay pic.twitter.com/lXT2BjC4WM

Here’s a sampling of some of the responses to the story from Twitter, beginning with a tweet from actor Scott Baio:

This hypocrite calls the police,sends in the police airship & many cars. Did she tell these wonderful law enforcement officers that she wants to “DEFUND THE POLICE” to their face? #AlyssaMilano why didn’t you call a social worker or a community peacemaker? https://t.co/1YkimF9smd

Cops for me
But not for theehttps://t.co/gioxhSQKpb

Meanwhile she just called the cops on a kid with a BB gun.

Why didn’t you handle it yourself, @Alyssa_Milano? 🤔

Thank them call then brave then cut their funding which will cost some of them their jobs and also put them at risk . I believe the word for that is hypocrisy.

I don’t fault you for calling the police or for having a neighbor who called the police. I want everyone to have that ability. YOU want to take it away. That’s what I fault you for.