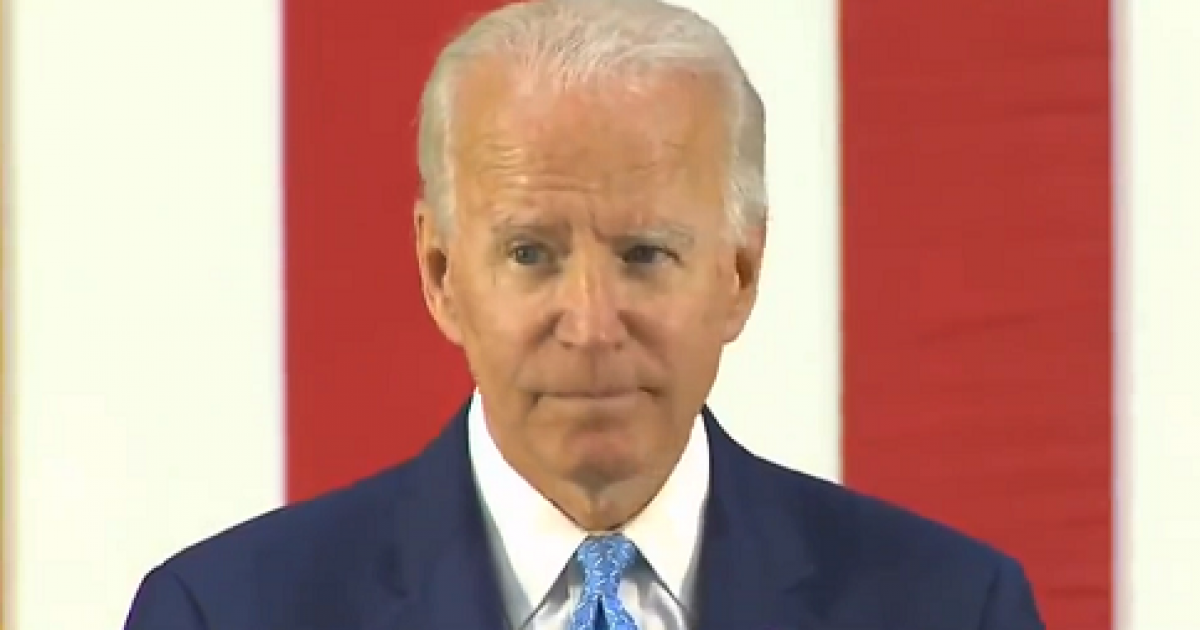 Presumptive 2020 Democratic presidential nominee Joe Biden opened a Pandora’s Box when he told a reporter on Wednesday that he has taken a cognitive test.

Not one to look a gift horse in the mouth, President Donald Trump, who calls Biden “Sleepy Joe” and has said more than once that Biden is “not all there,” responded to a story on the issue, tweeting: “He cannot pass the test I ‘aced’. He should give it a try!!!”

In what proved to be his first press conference in nearly three months, 77-year-old Biden was asked about any possible mental decline.

Biden initially called McKelway “a lying dog-face,” but then chuckled and let him ask his question.

But Biden’s campaign has been mum about any details of the supposed testing, or what that looks like.

On that note, the president’s eldest son and namesake, Donald Trump Jr., took to Twitter to ask: “Why isn’t the mainstream media calling for Joe Biden to release the results of his cognitive test?”

Why isn’t the mainstream media calling for Joe Biden to release the results of his cognitive test? https://t.co/5q1rBww0yf

We certainly know that if the shoe were on the other (Republican) foot, they’d be all over it.

In fact, they even tried to drum up phony concerns about the president’s health after his West Point Commencement speech last month — 74-year-old Trump stood in the sun for some time and saluted every graduating cadet, over 1,100 in total.

Liz Peek, a former partner of the Wall Street firm Wertheim & Company, penned an op-ed run by The Hill that explained why Biden must release the results of the test he said he took.

After noting that polling showed 38% of likely voters think Biden is suffering a mental decline, Peek had a lot of questions.

“Such as…where was he tested? Why, exactly, is he being ‘constantly tested’? Are his doctors worried about him? Most importantly, when will he release the results of those tests?” she wrote.

Peek noted how a Washington Post columnist ran interference for Biden by dismissing the concerns about Biden’s mental agility as “political gamesmanship” drummed up by Fox News.

“Sorry, that doesn’t wash,” she said. “I would like to remind WaPo readers that questions about Biden’s acuity have circulated for months, leading him to promise last September to publish his medical history. While he did indeed release some details of a physical check-up in December, that report did not include any appraisal of his cognitive capabilities.”

Insisting that “it’s important for voters to know why Biden is being tested, by whom and why,” Peek also noted that former Democratic contenders Julian Castro and Sen. Cory Booker touched on concerns about Biden’s state of mind in the primary.

Polling showed that one in five Democrats has some concern, and 61% think Biden needs to address the dementia issue publicly, as she noted.

“How else, after all, to explain Biden’s infrequent give-and-takes not only with reporters, but even with funders?” Peek asked. “Why else would a Democratic standard-bearer turn down an interview with the left-wing New York Times, as Biden did in April. Why is Jill Biden seemingly more likely to speak for the candidate than the candidate himself? Why are Democrats dumbing down their convention, so that it becomes a non-event? Why won’t they allow a fourth debate with President Trump?”

“Biden has a good deal going for him, including a largely sympathetic media, most of which is dedicated to his victory,” Peek concluded. “He may be emboldened by the softball questions lobbed during his recent press event and decide to host more such encounters. That would be good for voters, and good for the country.”