Two CNN commentators known for their stunning race-baiting have speculated that the Trump administration’s publicly announced decision Thursday to reinstate the federal death penalty and schedule the execution of five inmates was a “genius” ploy designed to “divide” the nation over the issue of race.

“There is genius in this choice by this president and the AG, because this is one of the best issues to divide people along the lines of what are we about, who are we, will we kill?” CNN commentator and host Chris Cuomo said to fellow network host Don Lemon during the end of his program,” Cuomo Prime Time,” late Thursday evening.

“And that’s the point,” Lemon replied in agreement.

“And they want to say this isn’t about race, but you can’t look at the death penalty and not see racial disparity,” Cuomo continued. “You cannot look at it and not see that for what it is. But this is about something more, isn’t it? This is about who he wants to feed.”

The completely unsubstantiated conspiracy theory they were touting appeared to be that President Donald Trump and Attorney General Bill Barr have purposefully reinstated the federal death penalty to appease the president’s alleged white supremacist and white nationalist supporters.

Earlier Thursday the Department of Justice issued a statement revealing that the federal death penalty would be reinstated and that five federal death-row inmates would be executed in December 2019 and January 2020.

“Attorney General William P. Barr has directed the Federal Bureau of Prisons (BOP) to adopt a proposed Addendum to the Federal Execution Protocol — clearing the way for the federal government to resume capital punishment after a nearly two-decade lapse, and bringing justice to victims of the most horrific crimes,” the department’s statement reads.

“The Attorney General has further directed the Acting Director of the BOP, Hugh Hurwitz, to schedule the executions of five death-row inmates convicted of murdering, and in some cases torturing and raping, the most vulnerable in our society—children and the elderly.”

Below is a list of the five death-row inmates scheduled for execution.

Their race may be confirmed via the Federal Bureau of Prisons’ website. As seen above, three of these men are white — and one, ironically enough, is a white supremacist himself — while only two are minorities …

Lemon continued the discussion Thursday night by arguing that racism is still a dominant force in American society — and that the only way for Americans to stop being racist like their allegedly racist president is for them to begin having actual relationships with one another.

“If you look at most churches, most houses of worship, most businesses where people go to work every day, people have very little interaction with someone from a different race. Mostly white people in this country have very little interaction with black people or brown people, especially on a personal level,” he said without citing a single fact or statistic to back up this inflammatory allegation.

It’s unclear what interracial friendships and relationships have to do with the Trump administration’s death penalty decision.

The only valid point buried deep underneath the CNN duo’s race-baiting discussion was that there is indeed a legitimate dilemma of black suspects being falsely convicted. Just this week a black inmate was released from a prison in Michigan after his alleged rape victim realized he’d never raped her.

“In 2017, a jury convicted [James Chad-Lewis] Clay of raping a teenager in an alley on Detroit’s east side 20 years earlier. He insists he’s innocent, but DNA found inside the victim matched Clay, leading to the guilty verdict,” the Detroit Free Press reported.

“When the victim testified, she didn’t recognize Clay from their teen years and said she never had consensual sex with him. Then, earlier this year, she was shown a picture of what Clay looked like when he was younger and recognized him as a young man she had dated when she was in high school. The two dated around the time she was raped and they had consensual sex, she said.”

Cases like this highlight the need for imprisoned inmates to have the time to prove their innocence. However, in the case of the five men whose executions Barr has scheduled, each has had between 15 and 20 years to do as such.

Moreover, all five men have already “exhausted their appellate and post-conviction remedies,” according to the DOJ. And then, of course, there’s the fact that the majority of them — three out of five — are white, a fact that seems to dispel Cuomo’s concerns about “racial disparity.”

God you are disgusting. Now the death penalty is racial? Man come up with something new or report the actual news. Common sense Americans see the garbage coming out of your network and the ratings prove it. People watch @FoxNews for the truth! Ur not fooling anyone #KAG2020 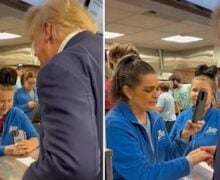