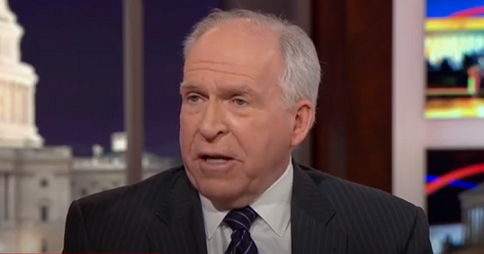 Former CIA director John Brennan appears to be as nervous as a cat in a room full of rocking chairs.

With Attorney General William Barr looking to get to the bottom of how the Russian collusion hoax got started, which led to President Trump’s campaign being spied on by U.S. intelligence assets, Brennan is real jumpy these days.

Now an MSNBC contributor, the former spy chief was quick to react to a tweet from Trump that cited Brennan acknowledging that he got it wrong on Russian collusion while calling on Congress to get back to work on the nation’s problems.

“John Brennan on the Mueller probe, “I don’t know if I received bad information, but I THINK I SUSPECTED THAT THERE WAS MORE THAN THERE ACTUALLY WAS.” Wow, he admits he was wrong! Congress should go back to work on drug prices etc.”

With no less than five Democrat-controlled House committees targeting Trump with some sort of investigation, most looking to rehash the 2-year, $30 million-plus probe by special counsel Robert Mueller, it’s understandable that the president has grown weary of witch hunts.

The Brennan quote was his initial reaction to Barr releasing a summary of Mueller’s findings, which produced zero evidence that Trump or anyone associated with him colluded with Russia to steal the 2016 election.

Admitting he may have gotten it wrong, Brennan said on MSNBC’s Morning Joe, “I don’t know if I received bad information, but I think I suspected there was more than there actually was.”

This coming after Brennan said he “smelled more indictments coming” just prior to Mueller concluding his investigation — it’s not clear what Brennan was smelling, but it proved not to be indictments.

Yet, Brennan dared to call the president “dishonest” for accurately quoting him in a response to Trump’s tweet, as he publicly smeared Barr’s assessment of the Mueller report.

Brennan tweeted: “I subsequently learned from the Mueller report that there was a lot more evidence of collusion and obstruction of justice than was indicated in the misleading & highly politicized Barr memo. Your obvious fear of Congressional action is warranted & your dishonesty is appalling.”

I subsequently learned from the Mueller report that there was a lot more evidence of collusion and obstruction of justice than was indicated in the misleading & highly politicized Barr memo. Your obvious fear of Congressional action is warranted & your dishonesty is appalling. https://t.co/v4SoUf3Gdd

One would think Brennan has enough on his plate already being pitted against fired FBI director James Comey on who included the unverified Christopher Steel dossier, funded by Hillary Clinton’s campaign, in the intelligence community assessment on Russian interference, known as the ICA.

Comey told bureau subordinates that Brennan insisted the dossier be included in the ICA, according to Fox News.

But a former CIA official said in a statement to the network the blame is squarely on Comey.

“Former Director Brennan, along with former [Director of National Intelligence] James Clapper, are the ones who opposed James Comey’s recommendation that the Steele Dossier be included in the intelligence report,” the official said.

“They opposed this because the dossier was in no way used to develop the ICA,” the official continued. “The intelligence analysts didn’t include it when they were doing their work because it wasn’t corroborated intelligence, therefore it wasn’t used and it wasn’t included. Brennan and Clapper prevented it from being added into the official assessment. James Comey then decided on his own to brief Trump about the document.”

And you wonder why Comey and Brennan are quick to discredit Barr? Or why the Democratic Party is dead set against the attorney general digging into how and why the Trump campaign came to be targeted?

George Papadopoulos, a former Trump campaign aide, responded to Brennan’s tweet to assure him that his role “will be exposed,” claiming other countries involved “have flipped on you.”

Oh, John: all the weaponized assets you sent my way [Joseph Mifsud, Alexander Downer, Stefan Halper] are all being outed from London, Rome and Canberra. Those governments are now actively cooperating with the Trump administration and have flipped on you. Your role will be exposed

Here’s a quick sampling of some of the responses to Brennan counter to Trump from Twitter:

So congress is elected and sent to the DC Swamp to investigate and persecute Americans because you democrats can’t get away with your crimes anymore? Sounds like a criminal blaming game to me!

Turn and twist as you wish, the reality stays the same: the Muller report could not produce an indictment because there is no crime.

It’s like watching all the ? trying to get the last seat, on the last lifeboat off the titanic.

Did you just learn that today on cap hill? Weren't YOU supposed to be briefing the Democrats and not the other way around? https://t.co/SKTlhyvp3J

This man is filled with so much hate rage against Trump that he keep digging his own grave each time he speaks . https://t.co/jjC6bGRYAw