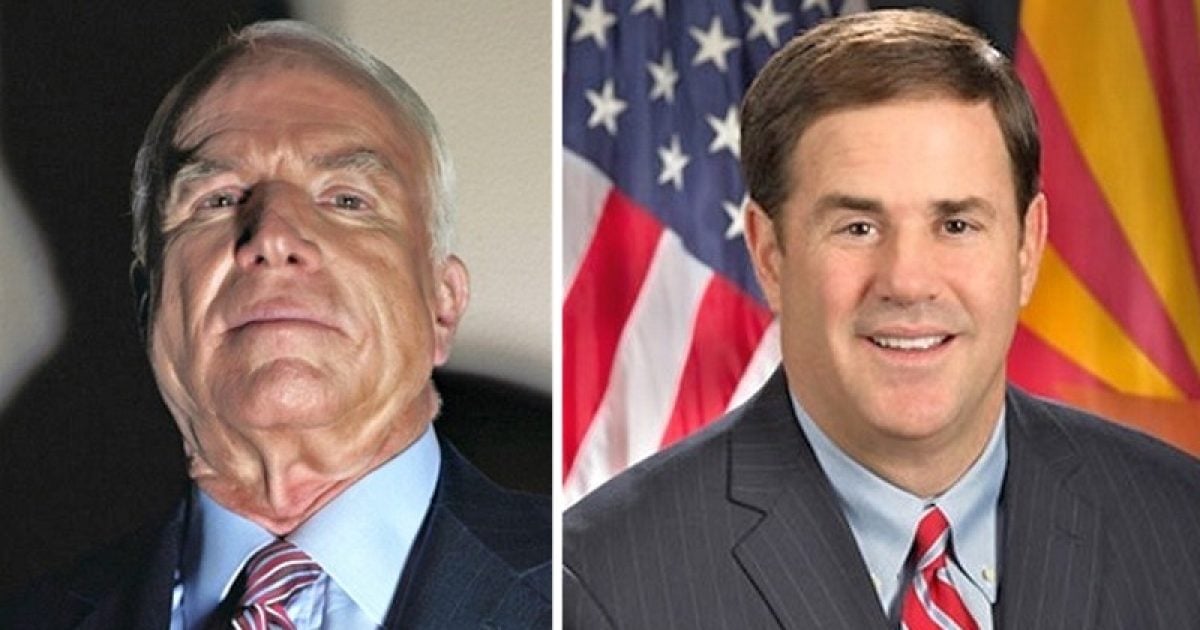 Liberals and the mainstream media — which viciously trashed John McCain as a white supremacist during most of his political career — are now heaping praise on the deceased Republican senator because it’s a politically expedient way to attack President Trump.

While Democrats pay lip service to honoring McCain in public, behind the scenes, they’re circling his open Senate seat like vultures. Some even hope they could sue to force a special election so they could flip the seat in the red state of Arizona.

Under Arizona state law, the governor names the replacement for any vacancy in the U.S. Senate until the “next eligible general election.” The person who is appointed must belong to the same political party as the person who previously held the seat.

In this case, Doug Ducey, Arizona’s Republican governor, will be responsible for appointing a Republican to fill the Senate seat held by John McCain since 1987.

But some in the liberal peanut gallery are hoping that Democrats could challenge longstanding Arizona law, claiming it’s ambiguous as to the candidate filing deadline requirements.

Here’s the issue: The filing deadline for candidates to fill McCain’s seat was May 30, since a candidate must file to run for election at least 90 days before a primary for a special election.

Arizona’s Republican primary election is Tuesday, August 28, and McCain died on August 25 — well past the May 30 filing deadline.

A blogger at Law and Crime suggested that the relevant statute is “ambiguous” because the wording about the filing deadline addresses “a vacancy in the office of representative in Congress.” And McCain was a senator, not a congressman.

“Subsection B outlines a series of requirements necessary to fill “a vacancy in the office of representative in Congress.” As both the statute and common understanding of U.S. politics makes clear, there is a distinction between a Congressional representative and a U.S. senator.”

Most legal experts would probably dismiss this as “grasping at straws” since there is longstanding precedent recognizing the governor’s responsibility/right to name a successor.

When asked by multiple media outlets if they plan to sue, the Arizona Democratic Party declined to comment, presumably so they can hide their salivating until after McCain is buried.

But The Hill shot down the speculation, reporting: “Cindy McCain, who may have served as a caretaker of her husband’s seat, is no longer seen as a potential appointee.”

Meanwhile, here’s a flashback to how the liberal media defamed and maligned John McCain during 99.9% of his political career.

They only started praising McCain in 2015, when he repeatedly attacked President Trump. Because in politics, the “enemy of my enemy is my friend” — at least as long as it’s politically expedient.

Meanwhile, many Republicans remember that if McCain had his way, Hillary would be president.

Some liberals still denounce McCain as a white supremacist, even in death. So there you have it.

Fuck you. He made life miserable for millions.

People only liked John McCain in today’s age bc he publicly voiced his dislike for Trump. It’s almost as if they forgot his voting record and racist past

Only reason white-liberals like him is bc he said a few mean things about Trump publicly, while supporting him behind the scenes

Remember when Roseanne Barr got fired and her life was destroyed over a tweet like this one from the Left’s new hero?

Here are some of John McCain’s career highlights as a tool for Trump-hating liberals.

Tiger Woods won’t be baited into trashing Trump: ‘ You have to respect the office’