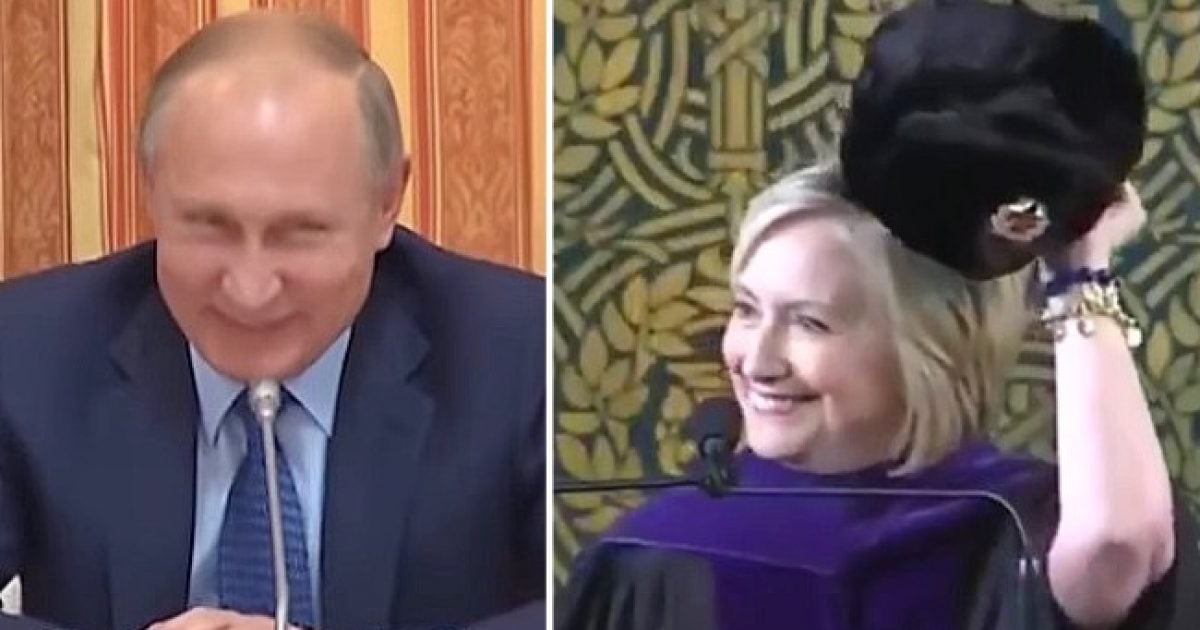 Two-time failed presidential candidate Hillary Clinton admitted once again that she’s “still not over” losing the 2016 election to President Donald Trump. She then jokingly pledged her support to the Russian Federation, saying, “If you can’t beat ’em, join ’em!”

Clinton made the remarks this weekend while giving Yale University’s commencement address, where she made the college graduation ceremony all about her.

“No, I’m not over it!” Hillary confessed. “I still think about the 2016 election. I still regret the mistakes I made…I remember the first months after that 2016 election were not easy.”

Clinton said she coped by taking “long walks in the woods,” spending “hours going down a Twitter rabbit hole,” and guzzling her “fair share of chardonnay.”

Hillary then stepped on a rake by trying to troll President Trump when she whipped out a Russian bomber hat and said, “I see looking out at you that you are following the tradition of over-the-top hats. So I brought a hat, too, a Russian hat. If you can’t beat ’em, join ’em!”

While the audience laughed politely, Clinton merely self-owned herself, since many already believe she and Vladimir Putin were longtime comrades. After all, it was Hillary’s campaign that paid Russia-connected foreign agents to compile the sham “Trump Dossier.”

As Secretary of State under Barack Obama, Hillary also orchestrated a deal that reportedly gave Russia 20 percent of all U.S. uranium reserves to Russia in exchange for millions of dollars to her Clinton Foundation.

As for President Trump and his alleged Russia connections, special counsel Robert Mueller has produced no evidence of collusion after a year-long, $10 million taxpayer-funded investigation.

While Trump is busy crushing ISIS, bolstering the U.S. economy, and brokering peace on the Korean peninsula, Hillary Clinton can’t stop obsessing over the 2016 election. Hillary has come under fire by members of her own party for refusing to fade gracefully into the background as they try to disassociate themselves from her epic election debacle.

Meanwhile, here’s what her husband, former president Bill Clinton, is up to.

While Hillary is giving commencement addresses on college campuses, Bill is apparently scoping out the campuses for fresh meat, with his fly unzipped.

IT IS ABSURD!!Bill Clinton continues to be and will always be a disgusting piece of human flesh. Bill Clinton ogles 2 hot girls with his fly unzipped in viral photo. 'Did somebody say new interns?' https://t.co/aCnw10Y8DT via @BIZPACReview