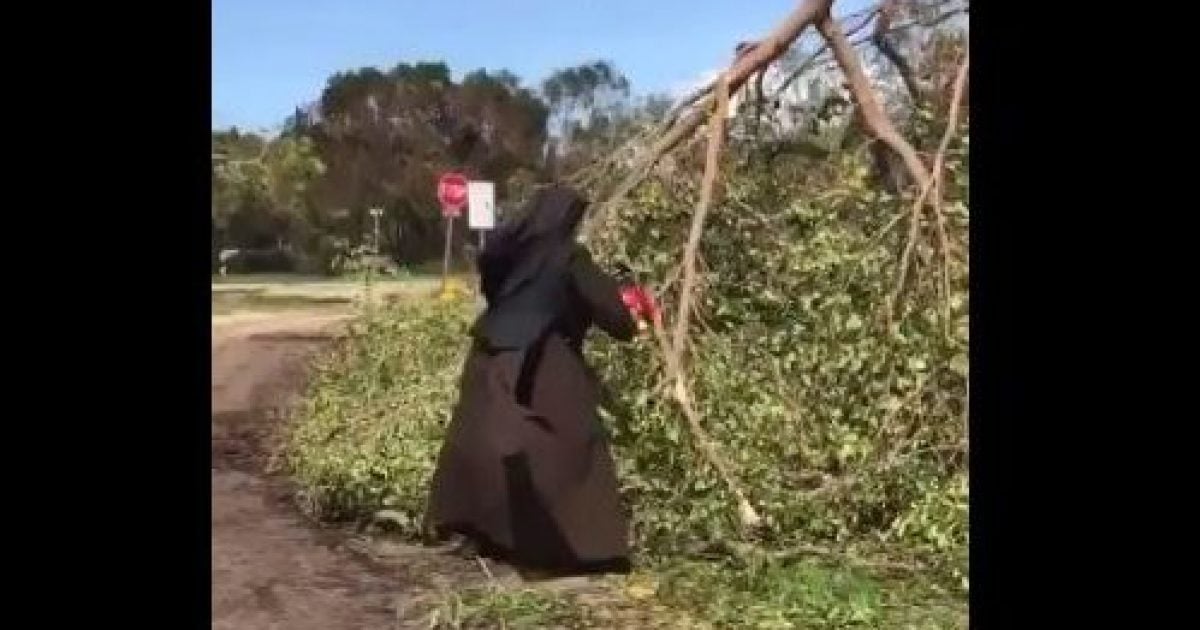 Amid images of recovery efforts in Florida after Hurricane Irma, the sight of one particular person helping with the cleanup stood out.

An off-duty officer of the Miami-Dade Police Department came across a nun, with a chainsaw, ripping into a fallen tree blocking a road.

? of Sister Margaret Ann in action. Thank you to all of our neighbors that are working together to get through this! We are #MiamiDadeStrong pic.twitter.com/5tG6nzk7Ye

“Thank you Sister and all of our neighbors that are working together to get through this!” the department wrote on their Facebook page, praising the efforts of Sister Margaret Ann of Archbishop Coleman F. Carroll High School in West Kendall.

But the story of a chainsaw-wielding nun couldn’t stay local for long.

Sister Margaret Ann’s video and story quickly spread outside of Florida, making headlines and winning the internet. She was even interviewed by CNN.

“The road was blocked, we couldn’t get through,” she told Erin Burnett on “OutFront” Tuesday. “And I saw somebody spin in the mud and almost go into a wall, going off the road. So, there was a need, I had the means — so I wanted to help out.”

This nun took a chainsaw in hand to help clean up debris from Hurricane Irma https://t.co/noNcbZBrgT https://t.co/r6bixPDJx5

The nun knew there were chainsaws in a closet at the school.

“They didn’t belong there. They needed to be used,” she said, recalling when the police officer came across her sawing the tree.

“He said, ‘You know though, Sister, the police will do this.’ And I said ‘but it’s going to take them too long … it’s dangerous, people are going to get hurt here,’ ” she said.

Sister Margaret Ann did not know when her school would be reopening as the air conditioner was damaged during the hurricane. A wall was also blown in at the school and six of its 40 acres were covered in fallen trees.

But the educator was confident they would not be forgotten.

“The community will come out and help us. That’s what we do,” she told Burnett. “It’s good.”

Her own efforts and sentiment seemed to resonate online as many praised, thanked and were inspired by Sister Margaret Ann.

“We teach our students: Do what you can to help other people, don’t think of yourselves,” she said. “That’s what I wanted to do.”

LOVE her spirit! This nun rocks! ??

The best tweet of the day. Don’t mess with the nuns. Love it!

Chainsaw nun may be the best thing on the internet right now https://t.co/LrkJZavSny

Nun with Chainsaw. This is going to be my Halloween costume this year.

Nun with a Chainsaw is a great phrase for almost any occasion. https://t.co/HZ9tRKxFf1

Simply wonderful, but I worry about the blowing habit and veil! Sister, put on something safer!!

I think the good Lord would rather she wear something a little less baggy while rocking the chainsaw but otherwise right on!

Nuns with Chainsaws is my new band name.

A nun with a chainsaw. Now I’ve seen everything.