The coffee wars between Dunkin Donuts and Starbucks has hit near-presidential levels.

Apparently, when Hillary Clinton strolled into a Dunkin Donuts on Sunday, it wasn’t all for show, like so many of her staged “impromptu” events. Both she and struggling Republican contender Jeb Bush’s campaign seem to love the significantly cheaper java from the donut maker.

According to the data, it isn’t even close. Hillary’s team far and away guzzles more coffee fit for common folk than any of the other candidates. On the other hand, Marco Rubio’s and Ted Cruz’s team are chugging Starbucks. That’s right, the Republican candidates seem to be regulars at the mega-chain that regularly ignites controversy with its coffee cups.

Whether it be a Christmas crisis, or insulting patrons with mini-lectures from part-time baristas on the issue of racism, your odds of running into these campaign teams goes up significantly if you hang at the fancy-pants coffee chain. 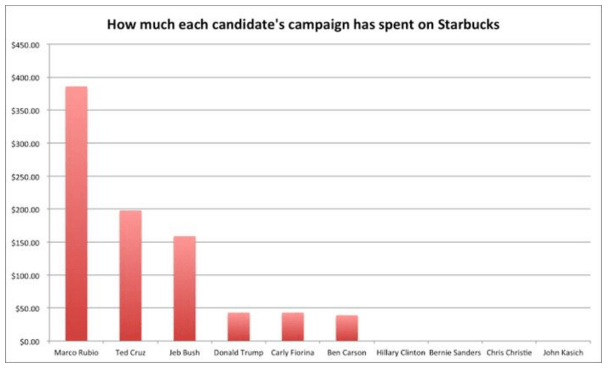 When it comes to the candidates specifically, Clinton and Jeb top off the Dunkin Donuts drinking, while Rubio comes in a close second (wow, Rubio really loves coffee doesn’t he?).

Despite singing Dunkin Donuts’ praises along the New England campaign trail, Cruz only purchased two cups for himself, according to the reports, and tied with Democrat/Socialist Bernie Sanders. Why does it matter? It doesn’t, except for perhaps this one interesting tidbit: neither the Sanders nor Clinton campaigns spent any money at liberal-leaning Starbucks. Apparently, Democrats are only good at saving money when it’s their own.