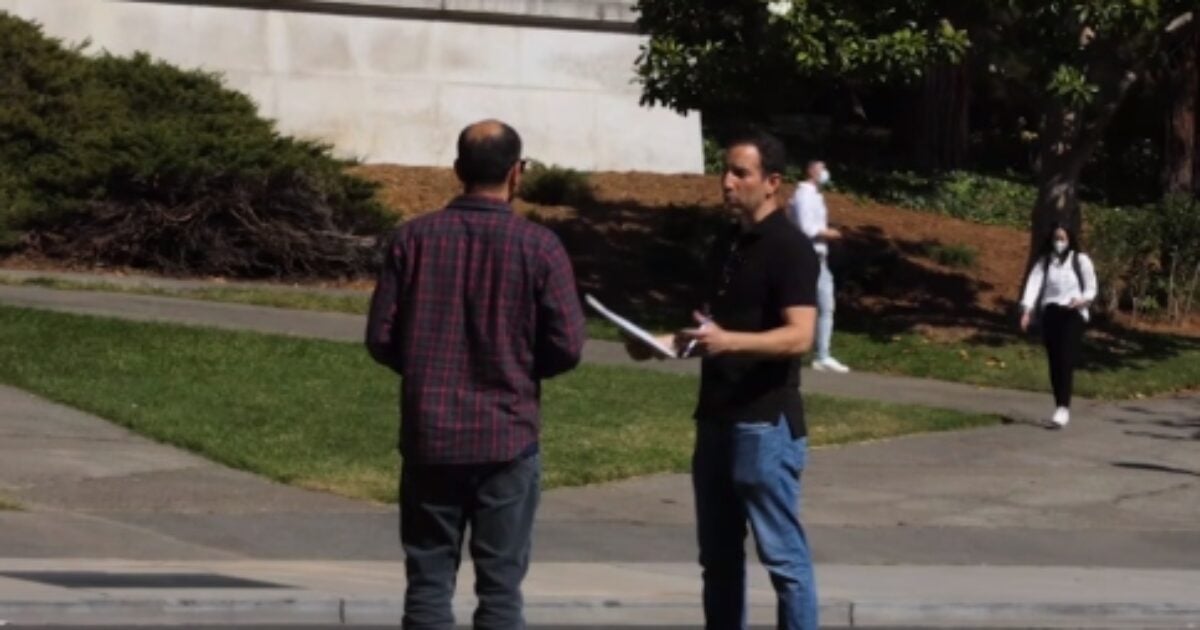 New York filmmaker Ami Horowitz has posted a hair-raising new video featuring students from the historically left-wing University of California-Berkeley campus who agree to pledge money to the Taliban so they can target American citizens.

The video, “Students Fund the Taliban,” includes Horowitz in the three-minute clip saying, “We’re raising money for the Taliban!,” and “Get your Taliban here,” as he engages in “canvassing for terror with the blitheness of someone handing out coupons for a sandwich shop,” the New York Post declared.

Best known for his “Stockholm Syndrome” video from 2017, a mini-documentary showing social unrest in the usually tranquil Sweden after mass Islamic migration, Horowitz discussed his clip on a number of news networks including Fox News and CNN.

Yet, he never believed he could actually pull off fundraising for the old/new rulers of Afghanistan.

“There is no way I can raise money for the Taliban — right?” Horowitz, founder of Disruptive Pictures who describes himself as a “guerilla journalist,” says as he opens his video.

But he did, as he explained in an interview with the New York Post.

“Every time I dream up an idea for a new video, I always have the same conversation with myself: ‘I’ve gone too far, this is too insane.’ There’s no way that people will accept the premise I’m going to present them with,” said Horowitz, citing a video filmed on the campus of Yale University in which he found several students who were eager to sign a petition to repeal the First Amendment.

The video shows several students who were inspired by Horowitz’s pitch to donate to fund terrorist activities against U.S. forces, U.S. interests around the world, and even target Americans at home.

“We’re Taliban 2.0 — we‘re kinder, gentler … not really,” he said to one student. “We want to be able to train our fighters to fight back against American interests,” he said to another.

“That sounds great!” said one student in response. “Appreciate what you’re doing,” said another.

One male student even said, “I would work for you.”

Horowitz told The Post that no one he encountered pushed back on his Taliban sales pitch in any way, shape, or form. And not a single student appeared to be offended.

“That was one of the most difficult moments for me,” Horowitz said, adding that most students who attend the $70,000-per-year campus were willing to chip in between $5 and $50 dollars.

“This is probably one of the only times where if someone punched me in the face, I’d be happy,” he continued, though that never happened. “Not a single person told me to go to hell or go f**k myself.”

He also said that he did not cherry-pick encounters for his video clip and that every student he met genuinely seemed ready to help one of the world’s most notorious terrorist groups attack their own country.

“The majority of people who stopped and talked to me decided they’d give me money for this — to fund the Taliban and specific use of proceeds to kill Americans, and strike back at America, and fund a new 9/11 on the U.S. homeland,” said the documentarian.

Even Horowitz’s cameraman, a left-leaning San Francisco resident, was stunned.

“Am I being punked right now? Are these actors?” he said to the filmmaker after about 30 minutes’ worth of encounters. “I don’t understand what’s happening.”

Horowitz then took a shot at USC-Berkeley.

“This is one of the best schools in the country. It’s complete and total brainwashing coming from the professors — they’re preaching the ills of America day in and day out,” he told The Post. “This is the most chilling video I’ve ever shot.”