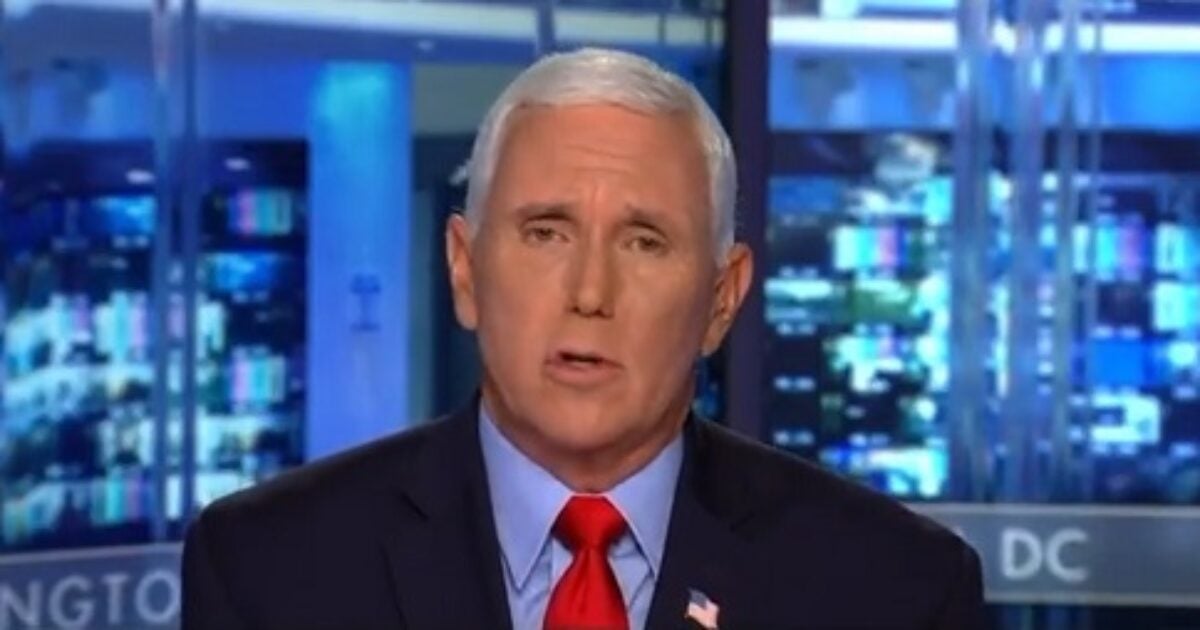 Former Vice President Mike Pence appeared Monday night on Fox News’ “Hannity,” and discussed his relationship with former President Donald Trump, which he suggested was “strong.” Pence also made overtures toward those who participated in the January 6 protest at the U.S. Capitol.

Not that his attempt to show solidarity with Trump supporters went over well on the right or left.

Pence said the focus on Jan. 6 by the Democratic Party and their media allies is an attempt to distract from President Joe Biden’s failures and an effort to “demean” millions of Republican voters.

“I know the media wants to distract from the Biden administration’s failed agenda by focusing on one day in January,” he told Fox News host Sean Hannity. “They want to use that one day to try and demean the character and intentions of 74 million Americans who believed we could be strong again and prosperous again and supported our administration in 2016 and 2020. For our part, I truly believe we all ought to remain completely focused on the future. That’s where I’m focused.”

Hannity opened the segment by asking the former governor of Indiana about his current relationship with Trump.

“You can’t spend almost five years in the political foxhole with somebody without developing a strong relationship,” Pence said. “Jan. 6 was a tragic day in history of our country. But thanks to the efforts of the Capitol Hill police, federal officials, the Capitol was secured and we finished our work. The president and I sat down a few days later and talked through all of it. I can tell you that we parted amicably at the end of the administration and we have talked a number of times since we both left office. But I believe that our entire focus today should be on the future.”

Trump was highly critical of his vice president for not rejecting the Electoral College certification of the 2020 election — Pence said at the time he didn’t believe it was within his constitutional authority to do so.

“It is my considered judgment that my oath to support and defend the Constitution constrains me from claiming unilateral authority to determine which electoral votes should be counted and which should not,” Pence said in a statement.

But that didn’t stop Trump from blasting him in a tweet: “Mike Pence didn’t have the courage to do what should have been done to protect our Country and our Constitution.”

Some protesters expressed their frustration with Pence on Jan 6., with the media eagerly reporting that they were chanting “Hang Mike Pence!”

The one thing the media has no intellectual curiosity about is exactly who was in that crowd outside the Capitol on that fateful day because they weren’t all Trump supporters. It is known that some of them were FBI informants and there were others clad in all black that stood out like a sore thumb — these operatives being among the first to breach the Capitol building.

Nonetheless, Pence took fire from all sides after Monday’s appearance. Here’s a sampling of some of the responses from Twitter without prejudice:

“People love sincerity and when you can fake sincerity, you really got it made.” – George Burns

The thing to remember about Mike Pence is, nothing.
He’s Mr.Cellophane.
Cause you can look right through him,
walk right by him, and never know he’s there.

Lying bigot Mike Pence says focusing on insurrectionists who stormed the US Capitol as well as chanted that they wanted to hang him is simply a distraction. That’s because his role in trying to help execute the attempted coup is bigger than realized. What a pathetic traitor.

Tell me again Mike Pence was the good guy? https://t.co/Aw6rBD5Ts5

If your fascist cult leader’s supporters built a gallows to hang you while they tried to overthrow the government, and you’re still doing everything in your power to gaslight, project, lie, deflect, and downplay that fact, you might be Mike Pence.