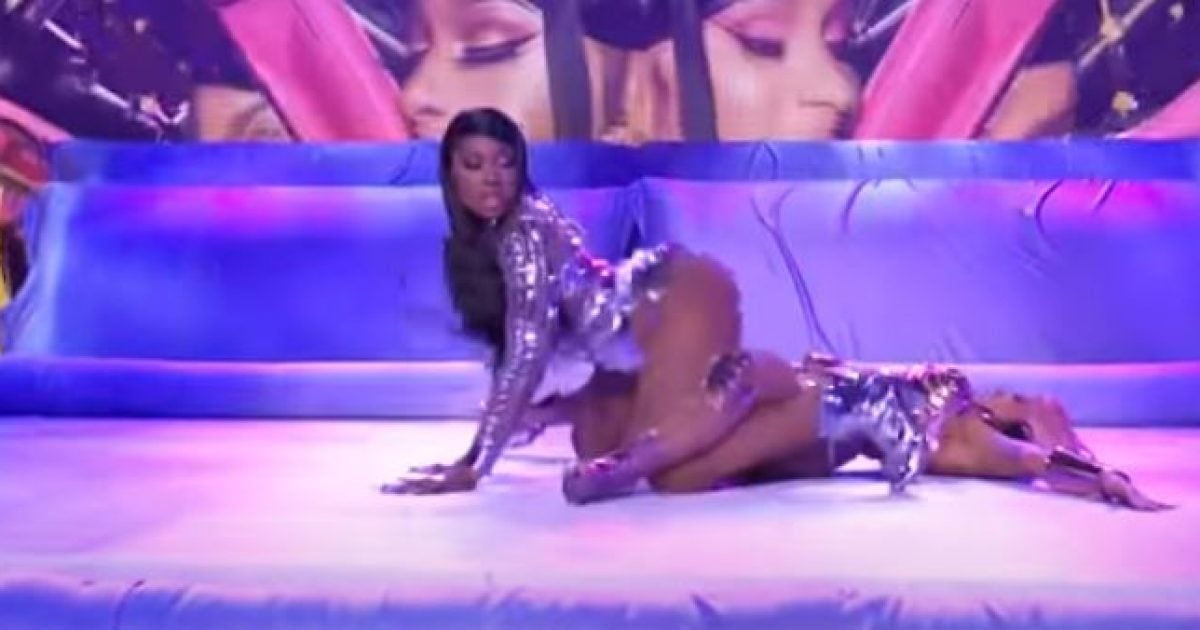 Singers Cardi B and Megan Thee Stallion turned heads during what many consider a highly controversial and raunchy performance of their hit single “WAP” during Sunday’s Grammy Awards show.

Prior to the duo taking the stage, host Trevor Noah warned adult viewers, “If you have small children in the room, just tell them it’s a song about giving a cat a bath.”

In a neon purple two-piece outfit, Cardi B began by dancing up against a pole resembling a stiletto high-heel as she was joined by several backup dancers.

Moments later as her verse was set to begin, Megan Thee Stallion joined in wearing a tight purple one-piece outfit. Later, both rappers performed the song on a large bed, often intertwining their legs.

Reaction to the performance online and elsewhere was decidedly mixed.

Always here for Megan Thee Stallion & Cardi B. Two of the most unique & talented artists working in music today.

“This was the best performance of the night. Thank you Cardi for giving us joy in such dark times. @iamcardib you have always possessed the Star power and we love seeing you conjuring it on every performance you create,” wrote another user.

This was the best performance of the night. Thank you Cardi for giving us joy in such dark times. @iamcardib you have always possessed the Star power and we love seeing you conjuring it on every performance you create. 👑❤️❤️❤️ #CardiB #GRAMMYs pic.twitter.com/eF78QcAqMX

But Charlie Kirk, founder of Turning Point USA, a conservative community organizing group that focuses on reaching out to college and university students, panned the performance as inappropriate given recent moves to cancel other American cultural icons.

“The left is fine with the disgusting performance Cardi B just gave at the Grammys but Dr. Seuss is too dangerous for our children?” Kirk wrote on Twitter.

The left is fine with the disgusting performance Cardi B just gave at the Grammys but Dr. Seuss is too dangerous for our children?

“Wow this is on network TV,” Brandon Griggs, a senior editor at CNN, wrote in a post that included a photo of the two rappers performing on the bed.

Wow this is on network TV #CardiB #MeganTheeStallion #wap pic.twitter.com/iXSDignWQg

“I’m a pretty laid back person, but having WAP featured on the #GRAMMYs is absolutely disgusting and ridiculous,” Alex Markham, publisher of Ute Nation, a website featuring news and information about University of Utah sports.

I’m a pretty laid back person, but having WAP featured on the #GRAMMYs is absolutely disgusting and ridiculous.

Others voiced concern for any children who saw the performance.

“WAP” — short for a descriptive sexual term that many Americans find offensive and raunchy — was released by the rappers in August and debuted at No. 1 on Billboard’s Hot 100, where it remained for several weeks. The song also set streaming and downloading records.

But its lyrics and the rappers themselves have both come under scrutiny in the past for what critics describe as the blatant debasement of American culture.

Bestselling author and founder of Blexit, Candace Owens, has frequently feuded with Cardi B online, describing her explicit music as detrimental to blacks especially.

Shortly after WAP debuted, Fox News’s Tucker Carlson addressed concerns about the impact the song and others like it are having on the culture, particularly its influence on young Americans and children.

“To give you a sense of what the song is about — and again, we should tell you, this is one of the most popular songs in the country, and you need to go online and look up its lyrics — here’s the woman who sings it, Cardi B, explaining to women how they can become more useful sex objects,” he said.

“That’s garbage,” he continued after playing a clip of the song, much of which was bleeped out. “You don’t need to be a puritan to think so. It’s garbage. It’s aimed at young American girls — maybe your girls, your granddaughters, and what is it doing to them? Can you imagine what it’s doing to them?”