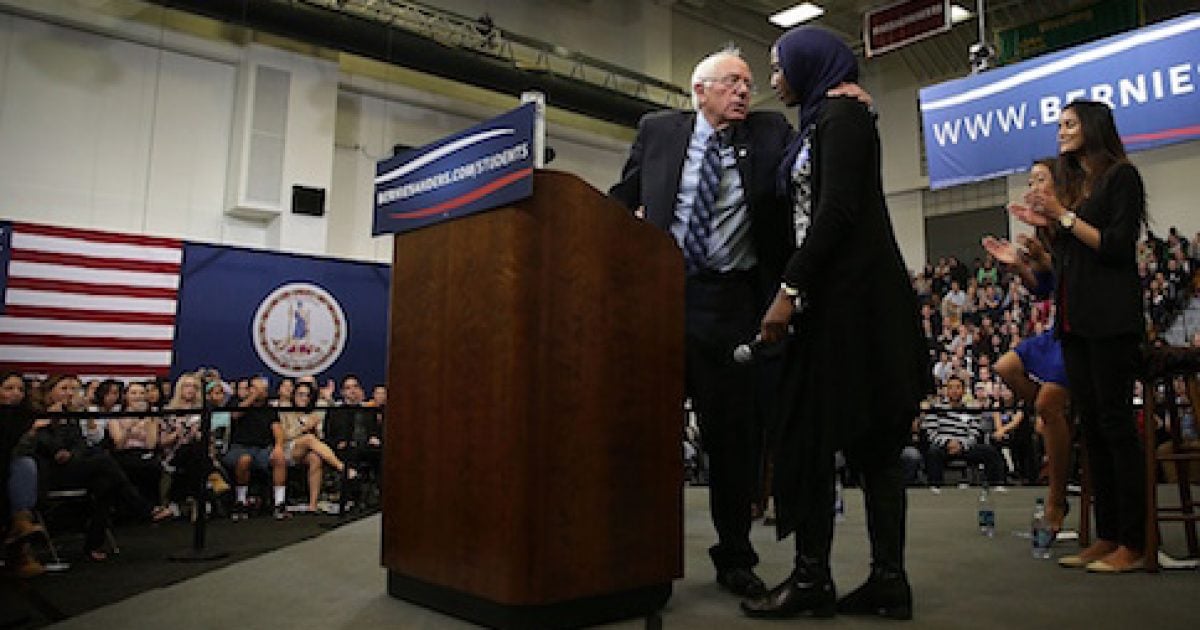 Bernie Sanders doesn’t have much chance of getting the Democrat Party nomination in the 2020 presidential election, but he does have a large Muslim following.

While it seems strange that an elderly Jewish man from Brooklyn would be able to connect with Muslim Americans, that’s exactly what the 78-year-old socialist senator is doing.

Sanders “supports Muslims like no other candidate,” said Rusha Latif, an Egyptian woman from San Jose, at a recent event in support of the Vermont senator in Oakland, California. Latif made her comments to a room full of Muslims while she stood in front of a handwritten poster that read: “Muslims and Arabs for Bernie.”

The gathering of volunteers and supporters took place at a Syrian-Palestinian cafe, according to The Los Angeles Times.

Sanders has been visiting mosques and engaging Muslim communities since he last ran for president in 2016.

“Bernie Sanders seems to be doing something different,” Chouhoud said.

“Muslims appreciate how he is giving them opportunities to be part of his movement,” said Cynthia Ubaldo, a physical therapist in Columbus, Ohio.

In this presidential race where Sanders has polled well but been unable to stave off stiff competition from Joe Biden and Elizabeth Warren, Sanders has made his push with Muslims more aggressive.

He headlined the Islamic Society of North America convention in Houston last month.

He visited a Los Angeles mosque to help commemorate the lives lost in the New Zealand massacre at two Islamic places of worship.

“Some politicians think just visiting a mosque or speaking to Muslims once is enough. Bernie is doing more, and making us feel like we are in the campaign,” Fayaz Nawabi, a delegate for the California Democratic Party, said about Sanders’ courtship of Muslim communities.

Linda Sarsour, the very controversial co-founder of the Women’s March movement, says the fact that Sanders is Jewish breaks many stereotypes about Muslims.

“The fact that he is Jewish American crushes the stereotype that Muslims and Jews are natural enemies,” she said. Sarsour has a concerning history with anti-Semitic comments, as do many leftist politicians like Alexandria Ocasio-Cortez and Rashida Tlaib.

Where you will witness the biggest Muslim support of Sanders is on social media where many use the hashtags #Muslims4Bernie and #InshallahBernie to argue for the senator to take on Donald Trump in 2020.

"I would be so proud to win, but also to make history and elect the first Jewish American president this country has ever seen and for his name to be Bernard Sanders." –@lsarsour pic.twitter.com/INPRlvmMur

While Republicans have little chance of gaining significant Muslims votes in the 2020 election, Donald Trump has broken many barriers as a politician. On top of gaining support in previous Democrat strongholds like Michigan, Trump has found some Muslim Americans who are very vocal about their support for him:

Thank You Mr. President. Thank you, for your selflessness, and love for the American people. We stand behind you. #MuslimsForTrump#PromiseMadePromiseKept

Throwback with one of the few main men in Washington ,who still stand for something and always speak the truth former deputy assistants the president @SebGorka #trump #Muslimsfortrump #MAGA #FOX5DC #7OnYourSide pic.twitter.com/VyhUVUdAVN