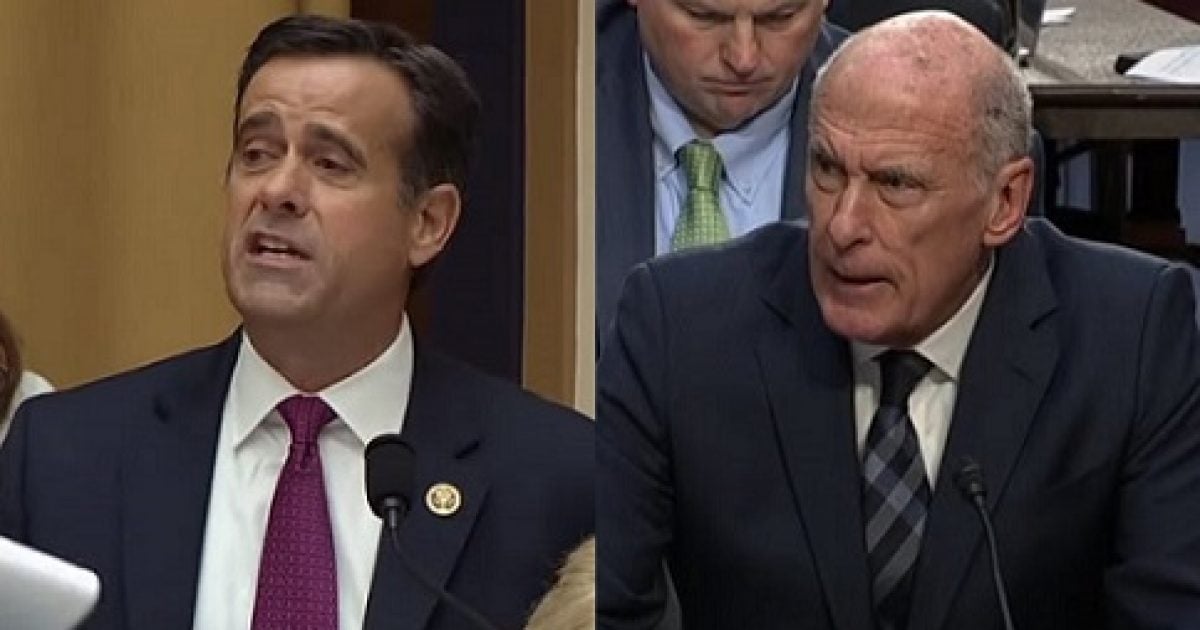 On Sunday, President Trump announced he will nominate Republican Rep. John Ratcliffe (R-TX) to replace Dan Coats as his Director of National Intelligence (DNI). Ratcliffe is recognized as a strong conservative who has been in Trump’s corner throughout his time in the White House, while Coats has occasionally been be out of tune with his boss.

“I am pleased to announce that highly respected Congressman John Ratcliffe of Texas will be nominated by me to be the Director of National Intelligence,” the President tweeted. “A former U.S. Attorney, John will lead and inspire greatness for the Country he loves. Dan Coats, the current Director, will…. ….be leaving office on August 15th. I would like to thank Dan for his great service to our Country. The Acting Director will be named shortly.”

….be leaving office on August 15th. I would like to thank Dan for his great service to our Country. The Acting Director will be named shortly.

Ratcliffe tweeted his gratitude and eagerness to get to work.

I am deeply grateful to President Trump for the opportunity to lead our Nation’s intelligence community and work on behalf of all the public servants who are tirelessly devoted to defending the security and safety of the United States.

of Texas over the past five years. I will take their wisdom and common sense with me in my new role, and I will always remember with pride my service to them, and all that we have accomplished together.

Just days ago, Ratcliffe memorably took Robert Mueller to task about his Constitutional abuses during a House Judiciary Committee hearing.

“Can you give me an example other than Donald Trump where the Justice Department determined that an investigated person was not exonerated because their innocence was not conclusively determined?” Ratcliffe demanded of Mueller, who stumbled to answer before simply saying this was a “unique situation.”

Trump supporters are applauding the DNI move. Sebastian Gorka, an intelligence analyst who served as Deputy Assistant to President Trump in 2017, tweeted, “I remember first meeting Dan Coats in the White in the 2nd week of the Administration. A nice man. Totally out of his depth as DNI. @RepRatcliffe as his replacement is promising. ESPECIALLY after he took Mueller to the ‘exoneration’ woodshed last week.”

I remember first meeting Dan Coats in the White in the 2nd week of the Administration.

A nice man. Totally out of his depth as DNI.@RepRatcliffe as his replacement is promising.

ESPECIALLY after he took Mueller to the ”exoneration” woodshed last week.https://t.co/6SsNWUg4XB

Coats has had disagreements with Trump over Russia, Iran, and North Korea, and on one occasion the president took a veiled shot at his DNI when he tweeted about “passive and naive” U.S. intelligence leaders, saying they should “go back to school.”

Meanwhile, liberals are expressing their dismay at the prospect of having Ratcliffe running the intelligence show.

Ken Dilanian, the Fusion GPS-connected NBC reporter who is highly implicated in the Russia collusion conspiracy theory, is tweeting his concern about John Ratcliffe’s nomination. pic.twitter.com/bBt80BwjSx

Replacing Coats has been on Trump’s “to-do” list for some time, according to Washington pundits, and Ratcliffe has been on the president’s radar all along. But the congressman’s performance last week in the Mueller hearing seems to have clinched the job for him.

There is no doubt that Ratcliffe will face strong opposition by Senate Democrats in his confirmation hearing.

“It’s clear that Rep. Ratcliffe was selected because he exhibited blind loyalty to President Trump with his demagogic questioning of former Special Counsel Robert Mueller,” Senate Minority Leader Chuck Schumer (D-NY) tweeted. “If Senate Republicans elevate such a partisan player to a position that requires intelligence expertise and non-partisanship, it would be a big mistake.”

It’s clear Rep. Ratcliffe was selected because he exhibited blind loyalty to @realDonaldTrump with his demagogic questioning of Mueller.

If Senate Republicans elevate such a partisan player to a position requiring intelligence expertise & non-partisanship, it’d be a big mistake. https://t.co/2uYP8vD39o

“From day one, Trump has made his disdain for the intelligence community clear,” Sen. Elizabeth Warren (D-MA) tweeted. “Our Director of National Intelligence should be above partisan politics, speak truth to power, and resist Trump’s abuses of authority. John Ratcliffe doesn’t fit that bill.”

House Speaker Nancy Pelosi said Coats’ exit “is bad news for the security of America,” and that his successor must “remember that his oath is to protect the Constitution and the American people, not the President.”