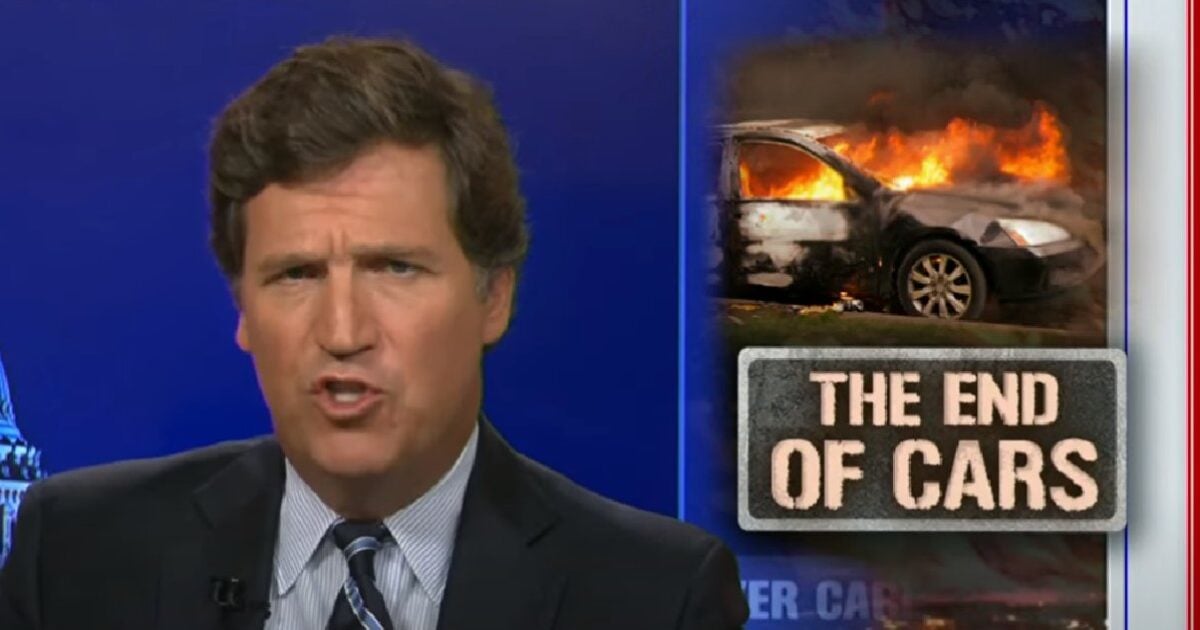 In Tucker Carlson’s latest segment on Fox News, he lambasted California’s elitist green czars, pummeling them for their incompetence and pointing out the obvious fact that electric vehicles are nothing short of a disaster for the environment.

It’s exactly the opposite of what the leftist leaders in California keep incessantly telling everyone.

“So, say what you will about California politicians, like them or not, it’s indisputable that on the question of energy, they have no idea what they’re doing and we know this because their track record of incompetence is lengthy and unbroken,” he said on “Tucker Carlson Tonight” Tuesday.

“They are majestic in their ineptitude. So naturally, they want more power over power. There’s just so much more to destroy. This week, the state’s surgically enhanced governor, Gavin Newsom, announced a new way to overburden California’s already collapsing energy grid. He’s got an idea. He wants to ban gasoline-powered engines and force everyone to drive an electric vehicle, a vehicle that has to be plugged into outlets that in the state of California no longer work. We’re not kidding, by the way,” he said, tearing into Newsom with gleeful abandon.

“Electric vehicles can be, above all, controlled by the people who control the grid and that means the next time that California’s energy regulator decides to shut off the power, you can’t go anywhere. You can’t leave California,” Carlson continued.

“Now, a few things you might notice about this. First, they’re doing this because they’re so concerned about carbon emissions and burning fossil fuels adds to carbon emissions and is destroying the planet. If you actually were worried about that, what’s the first thing that you would ban? Well, private jet travel obviously, private jet travel emits a lot of carbon. In just 60 minutes, a private jet emits more carbon dioxide, in fact, than the average American household emits in three months in one flight,” he explained.

“So if you’re looking to reduce carbon emissions, you would think they’d worry a little less about your minivan and a little more about their G4. Oh, but they’re not worried at all about their G4 and that’s why Taylor Swift, Gavin Newsom, and Nancy Pelosi, and all the other people out there lecturing about climate will never give up their private planes because when you fly private, you’re not only immune from COVID, like you don’t have to wear a mask on a private plane. Are you kidding? You poor or something? Shut up, but you’re also immune from the immutable laws of climate change,” he snarked.

“So, California has no interest in preventing people who are making the rules like Gavin Newsom, from traveling anywhere they want. They want to control the way that you travel. Now that’s California. So, you are tempted to say, ‘Well, okay, California’s beautiful, but it’s obviously run by lunatics who are turning it into a third-world country. So maybe this is just part of their slate of ideas to wreck the prettiest place on the planet,’ but no, it’s not just California. It’s not just happening there,” the Fox News host noted.

Carlson reports that 15 states are getting ready to mandate electric vehicles. And he’s incensed over the clueless, power-hungry, over-educated leftists who are trying to control all of us with this insanity.

“Another cascade of unemployable morons, every one of whom has a long track record of failure. Not one of whom has ever done anything in the real world, all of whom giving you a moral lecture about how your car is destroying the planet when they’re flying private. How long is the country going to put up with this? There’s no reason to pay $4 or $5 for gas, even electric vehicles, says Ed Markey, who’s lived at public expense his entire life and has no idea what anything costs. A typical electric vehicle costs more than 60 grand, but that’s only part of the cost. Charging an electric vehicle in countries that have a lot of electric vehicles, a lot of them is now more expensive than filling your tank with gasoline,” he commented.

California recently ruled to ban gas powered cars by 2035 but just put out a warning to “avoid charging electric vehicles” due to power grid issues and blackouts. 🤡

“As Swedish journalist Peter Imanuelsen put it, ‘Electricity prices in Norway are set to reach about $1 per kilowatt hour. At these prices, it would cost $100 to fully charge one Tesla.’ And yet, all over the world, countries, politicians who may or may not have deals with the electric car companies are forcing people to buy products they don’t want, and force is the word. This is not a transformation that is taking place voluntarily as it would in a democracy where people get to govern themselves and choose the way they live. No, this is being imposed by a small number of people on top again, the ever… the revolution aimed downward as always,” Carlson pointed out.

Soon, you won’t even be able to buy a gas vehicle if these green religious zealots have their way, according to Carlson.

“A bank in Australia has announced it will be ending loans for gas vehicles. You just can’t buy one. You can’t finance it. The EU Parliament has just voted to support a ban on the sale of new gasoline and diesel cars beginning in 2035 in all of Europe. Now Europe, as we told you last night, is a place where they’re turning off traffic lights because they don’t have enough energy to keep them on. So, how is this going to work?” he asked.

“Well, the fact it’s happening at all is amazing. Take three steps back. Banning gasoline engines, which we’ve had for more than 100 years, which have completely defined modern society and that if you’re a normal person in this country and don’t use the subway from the Upper West Side to Midtown every day, but actually drive like the overwhelming majority of Americans, this is the biggest change in your lifetime. Have you been consulted on it? Has there been a debate about it? No,” he stated.

“All you hear is you must do this because it’s good for the environment, but that’s a lie. It’s measurably a lie. Electric vehicles are terrible for the environment. Roger McGrath took the time to spell it out recently in Chronicles magazine. As he noted, supplying the materials necessary for the battery of an electric car alone, just the battery, requires, and we’re quoting ‘processing using fossil fuels, of course, of at least 50 tons of ores.’ It takes a lot of energy to process ore,” Carlson noted.

Not to mention the materials for batteries in electric cars are not only environmentally unfriendly but primarily come from China, an enemy of the United States.

“A single battery for an electric car needs at least, ’30 pounds of lithium, 60 pounds of cobalt, 130 pounds of nickel, 90 pounds of copper, 190 pounds of graphite, and roughly 500 pounds of steel, aluminum, magnesium, plastic, and other materials,’ all of which are derived from mining. Where’s that mining going to take place? In third-world countries with no environmental regulations whatsoever. How is this good for the environment? Speak slowly so we can understand,” Carlson sneered.

“And yet, in California, under Gavin Newsom’s new order, every vehicle would require those materials. Here’s the problem. We don’t have that much lithium or cobalt in the United States. So, where are those elements going to come from, which are required for electric vehicles? Well, lithium mines in China. Did you know the answer to that already? Probably did and the Congo. Let’s go exploit Africa so we can feel virtuous,” he added.

“It’s a religion. It’s about making them feel like good people and increasing their control over you. Period. By the way, none of this even addresses the national security implications of this. Just as with solar panels and wind turbines, the materials required for electric vehicle batteries come from and you know the answer, China,” Carlson said.

“China processes 40% of the world’s raw lithium. China’s market share for lithium-ion batteries is about 80%. That’s according to Bloomberg and even if we somehow avoid that problem by mining lithium volcanoes in, say, Nevada and polluting the environment there, then what? Well, then you have hundreds of millions of Americans dependent upon cars that the government can turn off in a second that are, by the way, running software that tracks your every movement,” Carlson warned.

Electric vehicles are terrible for the environment, pass it on. pic.twitter.com/0ct3DmiW4M

The conservative pundit warned his viewers they can no longer trust the government, especially considering recent actions taken under the Biden administration.

“Now, in a high trust society where everyone thinks the government is on their side, a society that hasn’t just hired 87,000 armed IRS agents to crush small business and anyone who’d vote for them in a society like that, like maybe Sweden, 30 years ago, that would be totally fine because we trust that they’re on our side, but in a country in which the president of the United States is giving a speech two days from now declaring half the population a criminal element, probably not a good idea to turn your vehicle over to those people,” he posited.

In conclusion, Carlson points out the left’s control fetish that no one is adequately addressing and pushing back against, “This is the vehicular equivalent of digital currency. Electronic vehicles are a disaster for the energy grid, a disaster for the environment, and a disaster for your personal autonomy. If this happens, it will represent the single biggest change in the way you and your family live in generations and yet no one’s even talking about it.”