Ricky Walter Shiffer reacted on Tuesday to the raid on Mar-a-Lago by posting on Truth Social that he was “proposing a war,” according to the Daily Mail. The 42-year-old urged his followers to “be ready for combat” and to “kill the FBI on sight.”

As American Wire News reported, shots rang out after Shiffer allegedly showed up clad in body armor and sporting an assault rifle at the FBI’s Ohio field office in Cincinnati on Thursday morning and began making threats. He then sped off and was chased by Ohio State Highway Patrol.

The pursuit resulted in a five-hour standoff. After allegedly raising his gun to the officers in a cornfield on Thursday afternoon, police shot him dead, the Daily Mail reports.

But on Thursday morning, Shiffer allegedly made his intentions perfectly clear.

At approximately the same time the FBI office was breached, the following was posted to Shiffer’s account: “Well, I thought I had a way through bullet proof glass, and I didn’t.”

“If you don’t hear from me, it is true I tried attacking the F.B.I., and it’ll mean either I was taken off the internet, the F.B.I. got me, or they sent the regular cops while,” Shiffer allegedly wrote. 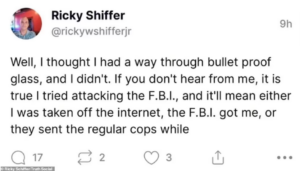 Two days prior, Schiffer — or at least, the account linked to his name — sent up a field of red flags

“People, this is it,” the account posted. “I hope a call to arms comes from someone better qualified, but if not, this is your call to arms from me. Leave work tomorrow as soon as the gun shop/Army-Navy store/pawn shop opens, get whatever you need to be ready for combat.”

“We must not tolerate this one,” Shiffer allegedly wrote. “They have been conditioning us to accept tyranny and think we can’t do anything for 2 years. This time we must respond with force. If you know of any protests or attacks, please post here.”

“I expect Donald Trump to call for peace,” he stated. “Donald Trump was my hero just a year ago, but we must not continue to lay down and take this. If he does call for peace, it is probably because he fears for the lives of his grandchildren and young children.”

“It is a dark situation for that family,” Shiffer said, “but millions of others kids are in danger until we show the enemy how Americans do it.” According to the Daily Mail, Schiffer was also active on Facebook and Twitter, where he boasted about being at the Capitol on January 6, 2021.

One video from Jan. 5 apparently shows him attending a pro-Trump rally in Washington, D.C.

In May 2022, he allegedly responded on Twitter to one tweet about Jan. 6 by saying, “I was there. We watched as your goons did that.”

He reportedly blamed Trump’s enemies for the damage done at the Capitol.

“When I told the ones trying to break back in that Trump tweeted to be peaceful, one of them said, ‘F**k Trump,'” he tweeted.

And Shiffer was reportedly affiliated with the Proud Boys.

“Oh, the packing. The packing could be here,” he allegedly posted in May. “Save ammunition, get in touch with the Proud Boys and learn how they did it in the Revolutionary War, because submitting to tyranny while lawfully protesting was never the American way.”

Naturally, online, the left is seizing on all of this in an attempt to paint all “America First” Republicans as dangerous radicals.

“BREAKING: In a 6 hour gun fight, Police have killed the terrorist who attacked the FBI in Cincinnati. His name is Ricky Walter Shiffer, he’s a MAGA Trumper, & he was a Jan 6 insurrectionist,” tweeted podcaster Qasim Rashid.

“No need to wonder where he was radicalized—a reminder of the CPAC banner a few days ago,” he continued.

And in case he was being too subtle for the virtue signalers in the back, Rashid added, “This horror is what the GOP has enabled & advanced.”

Shiffer’s final posts on “Truth Social” called for all our war and mass murder of Cops. They weren’t taken down and zero outrage from the GOP that he wanted to kill cops.

He also calls on people to be ready to die for Donald Trump. This horror is what GOP has enabled & advanced. pic.twitter.com/iekiIMzwPN