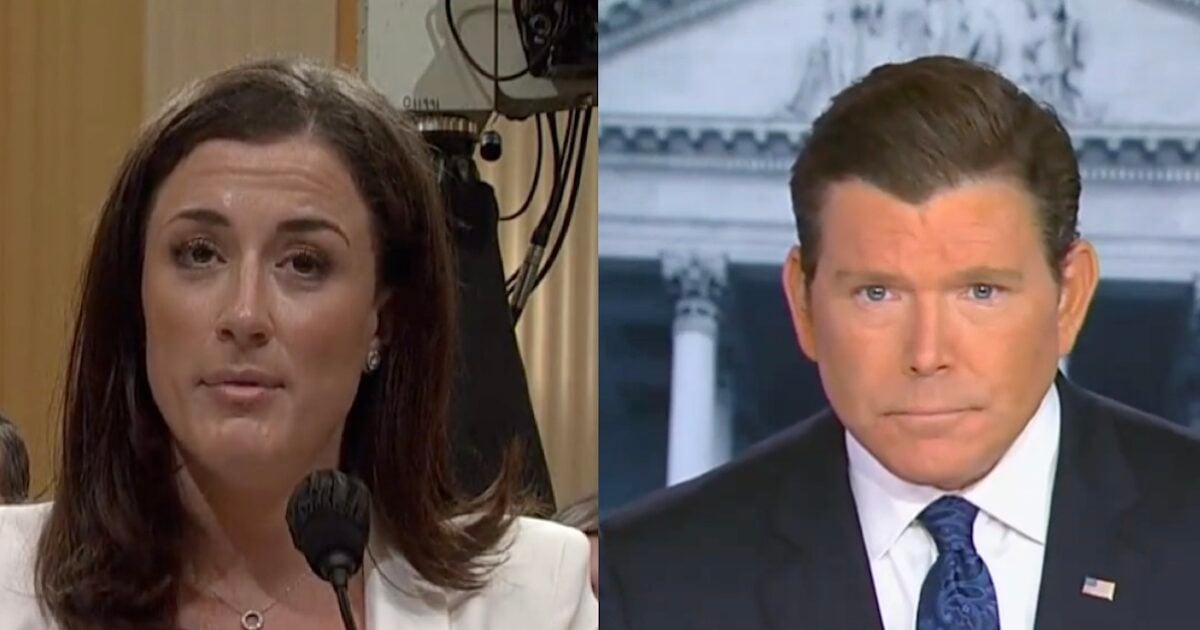 The partisan nature of the Jan. 6 committee hearings is not lost on anyone who cares about an accurate accounting of what happened the day the Capitol was breached. So when a former White House aide offered a second-hand account of an alleged incident from that day, it was notable that one Fox News host’s reaction seemed less than fair and balanced.

Cassidy Hutchinson, an aide to former chief of staff Mark Meadows during President Donald Trump’s administration, testified at the show trial Tuesday about a story she had heard that allegedly took place in the president’s motorcade on Jan. 6. Asserting her information had come directly from Secret Service assistant director Anthony Ornato, she recounted an alleged incident that involved Trump and the head of his Secret Service detail, Robert Engel.

After the president’s rally that day, the schedule had called for him to travel to the Capitol in the official vehicle referred to as “The Beast,” but as protesters marched to the building, the scene was reportedly ruled unsafe and the decision was made to transport Trump back to the White House.

“Tony described him as being irate,” Hutchinson testified. “The president said something to the effect of, ‘I’m the F-ing president! Take me up to the Capitol now.’ To which Bobby responded, ‘Sir, we have to go back to the West Wing.'”

“The president reached up towards the front of the vehicle to grab at the steering wheel. Mr. Engel grabbed his arm, said, ‘Sir, you need to take your hand off the steering wheel. We’re going back to the West Wing. We’re not going to the Capitol.’ Mr. Trump then used his free hand to lunge towards Bobby Engel and Mr. – when Mr. Ornato had recounted the story to me, he had motioned towards his clavicles,” Hutchinson continued. She had also described an infuriated Trump throwing his lunch.

Not long after that testimony, Fox News anchor Bret Baier joined “America Reports” with Sandra Smith and John Roberts with reaction to the testimony where he doubted President Trump’s version of events and stated in part, “We are now hearing from the former president on various posts where he questions her accuracy. He goes after her directly, says he doesn’t know who she is and said he didn’t lunge at the Secret Service agent in the Beast, that didn’t happen. He says he didn’t throw his lunch against the wall, that didn’t happen and that she’s lying.”

“Her Fake story that I tried to grab the steering wheel of the White House Limousine in order to steer it to the Capitol Building is ‘sick’ and fraudulent,” Trump wrote, “very much like the Unselect Committee itself – Wouldn’t even have been possible to do such a ridiculous thing. Her story of me throwing food is also false..and why would SHE have to clean it up, I hardly knew who she was?”

“Cassidy Hutchison is under oath on Capitol Hill. The president is on Truth Social making his statements,” Baier offered in a suggestive tone before later opining, “This testimony was very compelling from beginning to end.”

Meanwhile, NBC News Chief White House Correspondent Peter Alexander reported later, “A source close to the Secret Service tells me both Bobby Engel, the lead agent, and the presidential limousine/SUV driver are prepared to testify under oath that neither man was assaulted and that Mr. Trump never lunged for the steering wheel.”

Baier went on to say it would have been great to hear “[Rep.] Jim Jordan (R-Ohio) or some congressman say some other angle to this, but the testimony in and of itself is really, really powerful.”

As a result, he sounded more like the average corporate media pundit than the supposedly Trump-friendly outlet that Fox News had earned a reputation as. In fact, his statements were more in line with the sham committee for which a spokesperson had stated, “The Committee trusts the credibility of a witness who was willing to testify under oath & in public but is also willing to hear any information that others may have that would aid in their investigation.

A committee spox tells @CNN: “The Committee trusts the credibility of a witness who was willing to testify under oath & in public but is also willing to hear any information that others may have that would aid in their investigation.” https://t.co/WqxSCcysgf

NewsmaxTV’s Rob Schmitt referenced the testimony of Christine Blasey Ford against Justice Brett Kavanaugh at his Senate Judiciary hearing when he called out Fox News for the way it portrayed Hutchinson’s testimony as undeniable.