One of 10 RINO U.S. House members who voted for impeachment 2.0 has admitted that “hard to stop” Donald Trump is likely going to be the 2024 GOP presidential nominee, especially given the loyalty of the Trump base and his continuing popularity with them.

Longtime U.S. Rep. Fred Upton (R-Mich.) is one of just five Republicans who earlier this month voted for the Democrats’ gun control package known as the Protecting Our Kids Act.

Perhaps seeing the handwriting on the wall, Upton — who is supermodel Kate Upton’s uncle — is not seeking reelection this year from the Kalamazoo, Mich., area with changed boundaries due to redistricting. He was first elected in 1986.

During a Sunday interview on the network that has seen its ratings collapse, the Never Trumper acknowledged to a somber “State of the Union” host Dana Bash that Trump is a strong contender, although he described him as “a” candidate rather than “the” candidate.

“Well, I have said from the beginning, I think that Donald Trump is going to be a candidate in ’24. The voters still like him a lot. We see that certainly in Michigan. He’s had a number of decisive wins where he’s endorsed candidates and they’ve won. He’s had a few losses as well, but he certainly entertains a majority of the Republican base and will be hard to stop,” Upton conceded in the video clip embedded above.

“And, frankly, as we look at the economy, we look at gas prices, all these different things, folks are not really happy with the Biden administration, which is why he is mired at a level even below where Donald Trump was at this point in his tenure,” the congressman added.

Upton tried to explain to a seemingly disappointed Bash why Trump appears to be the favorite for the 2024 Republican nomination.

Reflecting the myopic corporate media mindset, Bash then lamented how pro-impeachment Republicans — such as Upton’s colleague Tom Rice, who just lost a primary — are on the way out, and wondered if any of the reelected lawmakers will “stand up” to Donald Trump after the November midterm election and beyond.

“Of the 10 House Republicans who backed impeachment, half — including yourself — will not be returning to Congress next year, and the remainder are facing some pretty tough reelection battles,” she noted.

Upton replied that he thinks there will be those who disagree with Trump if the latter runs and wins the White House. In the process, Upton threw shade on some of his colleagues for being “scared of their reelection” and because of that, voted against impeachment or voted no on the formation of the partisan J6 investigation.

The congressman has the distinction of being one of 35 Republicans in the House who voted for the J6 committee. In addition, Upton was one of 13 Republicans who voted for Joe Biden’s massive, $1 trillion-plus infrastructure (so-called) bill last November.

Bash and Upton began the segment by obsessing about the above-referenced committee hearings that no one outside of the CNN or MSNBC break rooms seem to following, although the retiring lawmaker suggested that moderate Republicans and independents are paying attention.

NBC News: Jan. 6 hearings not only failed to move Nevada voters but 'deepened fealty toward Trump' via @BIZPACReview – https://t.co/rfItgIl0qs 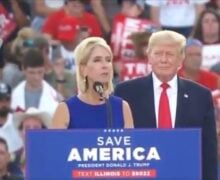