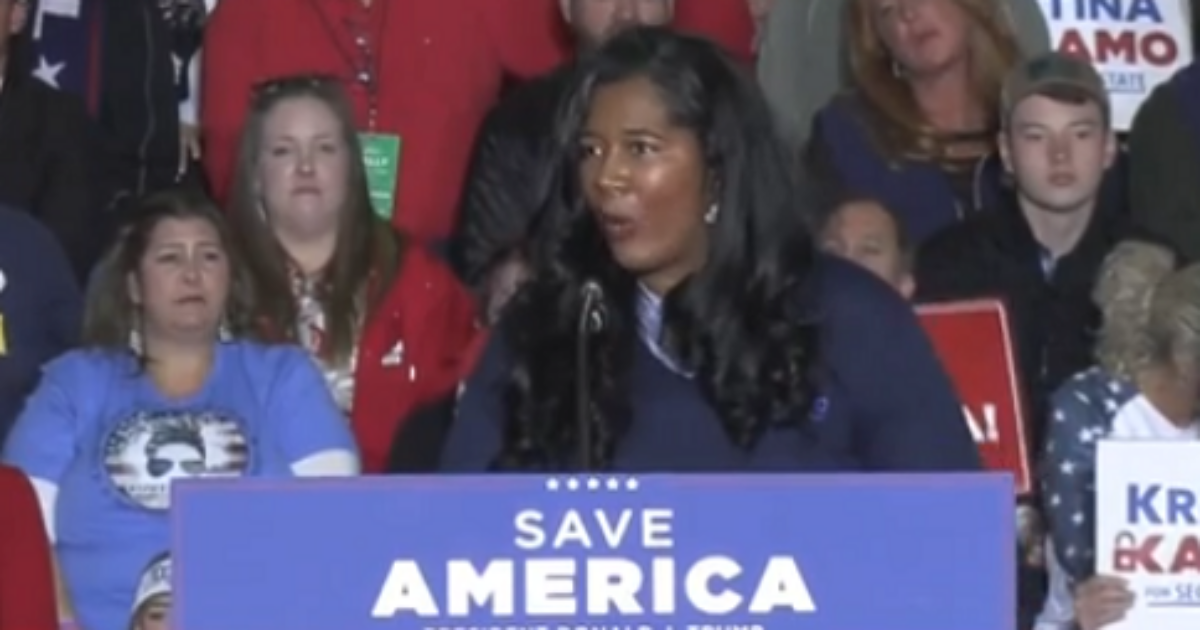 What impressed conservatives was how she used the rare platform to stand up for those Michiganders concerned about election integrity and security. Particularly those Michiganders who’ve been smeared by Benson as “insurrectionists” for daring to raise concerns about the 2020 presidential election.

“That is what happens when you have people in government who do not know and do not care about the state or the U.S. Constitution. Last time I checked, according to my First Amendment rights I have the right to redress my grievances to my government without being called an insurrectionist, without being called a ‘big lie’ proponent. Who do these people think they are? They work for us!”

We will not tolerate citizens being demonized for exercising our Constitutional Right, to petition our government for redress of grievances. https://t.co/PCl46ebBiZ

To be clear, Karamo wasn’t necessarily speaking about the Trump supporters who believe he won the 2020 presidential election.

She was possibly also speaking about those conservatives, including elected Republicans, who’ve raised concerns about election integrity/security issues and argued that these concerns merit tightening up America’s elections.

Karamo’s remarks came hours after Benson not only called for consequences to be leveled against anybody who dares raise concerns about the 2020 election — even if only talking about the reported irregularities that were ignored — but also equated any questioning of America’s election processes with a “threat against democracy,” as reported by Michigan Advance.

“The threats against our democracy are truly a five-alarm fire and in that fire, Michigan is ground zero. And it’s a fire that consists of a national coordinated effort … where partisan politicians and others are lying to voters about the 2020 election results and about what’s at stake in order to carry out this national, multifaceted, multi-year, coordinated and sophisticated effort to potentially overturn the results of a legitimate presidential election or other elections,” she said.

But speaking again later during Saturday’s rally — this time with Trump standing right beside her — Karamo explained why concerns about election integrity are in fact valid, despite Benson’s claims otherwise.

The aspiring Michigan Secretary of State explained that her vote in the 2020 election had initially gone uncounted. She wound up having to file a Freedom of Information Act request to prove that she had indeed voted.

“According to the state of Michigan, I didn’t vote in the 2020 election. … That’s the most infuriating thing. Like why would I spend all that time at the TCF Center [a major convention center in Detroit], knock doors for President Trump and turn around and not vote?” she explained.

“But then I FOIA’d my application to vote, proving that I voted in the 2020 election, even though, according to the state of Michigan, I didn’t vote.”

But, she continued, not everybody has the luxury of being able to quickly file a FOIA request.

“And there are so many people across the state where, according to the secretary of state, they voted different than they actually did vote. But we’re insurrectionists, we’re traitors and ‘big lie’ proponents for asking questions,” she said.

“But then our media protects corrupt politicians and demonizes the citizens for speaking up. So I am so excited to be your next secretary of state, to make sure that no matter who you vote for, what you believe, your vote counts, and your vote isn’t nullified by an illegal ballot,” she continued.

“And I want to thank President Trump for all you’ve done for our country. And you know what else, President Trump? You inspired so many people to run for office to stand up and fight back because he cannot do it by himself. It’s an army of people across our state who are fighting back. Little MAGA warriors. And we’re getting the job done!”

According to The Guardian, Karamo has also claimed to have witnessed fraud during the night of the 2020 election.

She’s specifically claimed that, while working unofficially at the TCF Center as a poll watcher that evening, she “personally witnessed fraudulent activity in which ballots were switched illegally from Trump to Biden.”

A week later, she reportedly filled out this incident report:

“In it, Karamo gives her account of what she claims to have witnessed. She was standing at an ‘adjudication table’ where ballots that are incorrectly filled in are scrutinized. She spotted a ballot on the screen in which a voter appeared to have cast their ballot along straight-party lines but for both main parties,” according to The Guardian.

“Karamo says in the ‘incident report’ that she watched as a poll worker unilaterally decided to award the ballot to Biden, no questions asked. When she complained and called for a supervisor, she claims she was told not to talk to the election staff.”

Learn more about Karamo at her official campaign website.