Former President Donald J. Trump once again jabbed a favorite target, the “Morning Joe” crew at MSNBC, mocking the show’s ratings and for good measure, dragging another host at the network, Joy Reid, as her show could be on borrowed time.

On Monday, in one of the statements from his Save America PAC that he has used to communicate to supporters since he was unanimously de-platformed by the tech companies that serve as censors for the Biden administration under the guise of the “public-private partnership,” Trump put on his television critic hat to rattle the cages of Scarborough and his wife and co-host Mika Brzezinski.

“Will Morning Joe be canceled?” Trump asked, “He and Mika’s ratings are very low—they are having an extremely hard time finding an audience to listen to the Fake News they spurn. Losing them would be very sad—hope it doesn’t happen!” 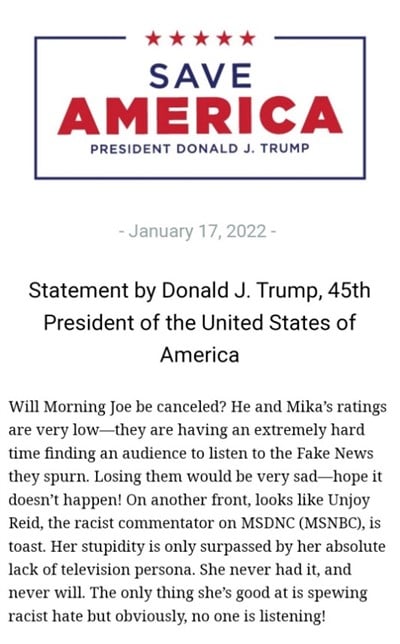 He added, “On another front, looks like Unjoy Reid, the racist commentator on MSDNC (MSNBC), is toast. Her stupidity is only surpassed by her absolute lack of television persona. She never had it, and never will. The only thing she’s good at is spewing racist hate but obviously, no one is listening!”

The former and perhaps future POTUS was referring to buzz that Reid, aka “the race lady,” could be on the outs at MSNBC due to a spring “reshuffling” of its lineup in advance of this year’s critical midterm elections when voters turn out to render their verdict on one-party Democrat rule amidst staggering inflation, empty shelves and the still-raging COVID outbreak that President Joe Biden vowed that he would be best suited to defeat.

The news of Reid’s possible ouster was first reported in a tweet by Jon Nicosia, managing editor of Mediaite who cited a source at Comcast, a company of which NBCUniversal is a subsidiary.

“She does not have a show come mid Spring” – The “decision has been made, the only thing left is messaging on the move, which will be ratings,” he wrote.

Source @ Comcast: "Joy Reid will lose her 7p show in the next round of reshuffling at MSNBC." – "She does not have a show come mid Spring" – The "decision has been made, the only thing left is messaging on the move, which will be ratings" – 1/

Nicosia added that Reid, who regularly spews anti-white racism and promotes conspiracy theories, is viewed as being “unmanageable” and likened her to disgraced CNN anchor Chris Cuomo who recently was fired by the self-proclaimed “most trusted name in news” as scandals piled up.

As was the case with Chris Cuomo at CNN, Reid has allies at Comcast, however, she is now viewed as “unmanageable” by many. Also, similar to Cuomo, it appears those allies have found out she has been “less than truthful about past incidents” 2/ (more to come).

As for Scarborough and his spouse, the couple has been embroiled in a running feud with Trump that intensified after his epic 2017 tweet about “Crazy Mika,” whom he said showed up at a Mar-a-Lago New Year’s Eve party “bleeding badly from a face-lift” and his repeated suggestions that there may have been foul play in the death of a young female intern whose body was discovered in Scarborough’s office back when Scarborough was a Republican congressman in Florida.

Following Trump’s statement, the duo delivered a very weak counterpunch, fixating on his use of the words instead of the meat of the message.

“I’ve never heard him talk about spurn,” Scarborough said while sucking on his frothy drink, “spurn, using that as a word, I haven’t, have you?”

“I don’t use the word, it’s new vocabulary!” he added.

“He can’t quit us…that would be a shame,” the host then said.

His better half then looked up the definition in order to gaslight viewers that Trump was actually paying the show a compliment, “Reject,” she gleefully exclaimed, “so we reject fake news, at least he’s accurate.”

The sad and pathetic truth is that while they will never openly admit it, the talking heads at MSNBC along with CNN never had it so good as when Trump was in the White House and their cratering ratings since he departed the D.C. swamp likely have them secretly longing for him to make a comeback in 2024.