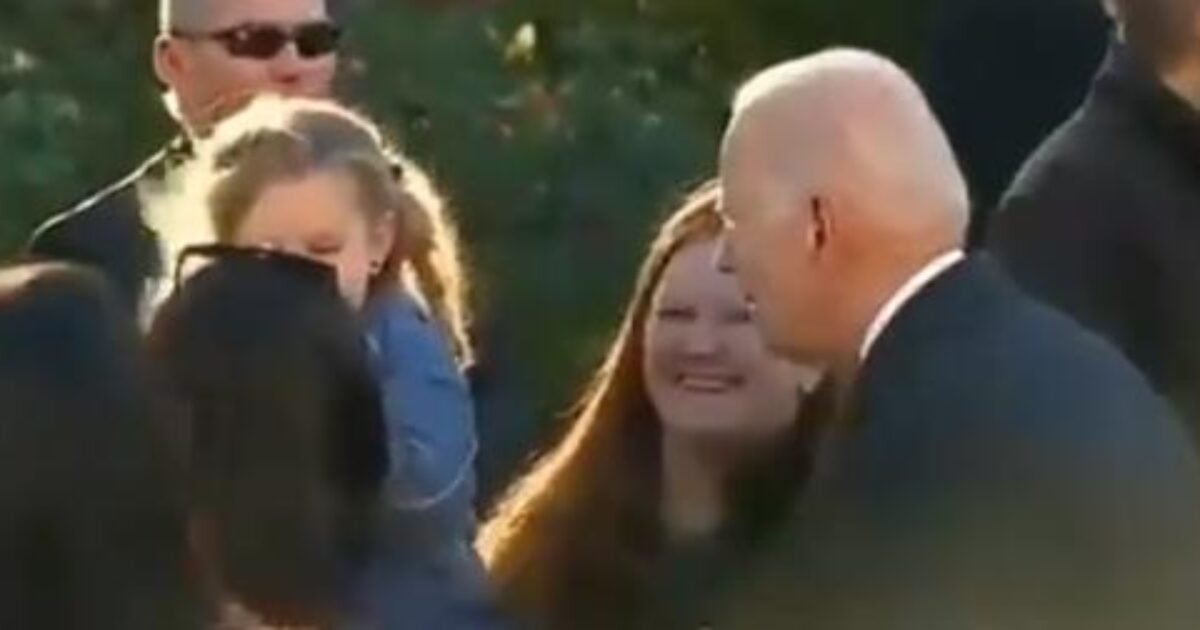 President Joe Biden pardoned two turkeys ahead of Thanksgiving during a White House ceremony Friday, but judging by his own behavior at the ceremony, many are now facetiously saying that he himself may soon need a pardon.

Video footage from the ceremony shows him walking up to a woman holding up a little girl whom he presumably doesn’t know and trying to talk to and and touch her.

It’s obvious from the footage that the young lady wants nothing to do with “Creepy Joe,” as she immediately turns her face away from him.

Undeterred by having his advances rejected, the president then seemingly tries to touch her face before running his finger down her jacket in a questionable way.

Annoyed by this violation of her personal space, the brave girl then lifts her left arm up in what some have described as a “chop block.”

The president then steps back with what looks like a frown.

It’s not clear whether he ever apologized for his behavior and was “pardoned” by the young lady whom he’d seemingly been harassing.

The now-viral clip spurred a couple different types of responses on Twitter.

One group of Twitter users rightly noted that this behavior fits a longtime pattern of Biden overstepping his boundaries with women and girls:

Over and over again kids he tries to get close to display that same squirming reaction. They intuitively know something is off. And yet the adults don’t seem to be paying much attention.

Why does he keep doing this

This obsessive and persistent harassment that he demonstrates for children here in Brazil has a specific penal type. And it can send the citizen to jail.

The way he touches, strokes and paws at kids is just bizarre. It is not normal. Don’t think I’ve ever seen anything like it, honest to God.

Why doesn’t someone tell him, other people’s kids are not your grandkids. Stop touching them.

This guy is a pervert. Don’t let him anywhere near children. I believe the diary.

The contents of the president’s daughter Ashley’s childhood diary were recently leaked to conservative media, and as seen in the tweet below by Colorado Rep. Lauren Boebert, in it there were mentions of her showering with her father.

Are there any real journalists willing to ask Joe about it? pic.twitter.com/5PgMxKUqxb

Another group of Twitter users lavished praise on the young girl who rejected Biden and pointed out that children’s instincts on such matters tend to be correct.

Kids can sense evil. Everyone he tries to touch or kiss is always trying to scramble away.

Biden’s touching habit first came up publicly during the 2020 presidential election when several grown women accused the then-Democrat presidential candidate of having sexually harassed them. One his accusers, Tara Reade, said he’d straight-up sexually assaulted her.

While the accusations prompted no political or legal consequences, they did inspire him to vow to the nation in 2019 that he would tone down his inappropriate behavior.

“Social norms are changing. I understand that, and I’ve heard what these women are saying. Politics to me has always been about making connections, but I will be more mindful about respecting personal space in the future. That’s my responsibility and I will meet it,” he wrote in a video tweet.

Attached to the tweet was a video in which in went more in-depth and also seemingly acted as if he missed the good ol’ days when he could touch whomever whenever.

“In my career I’ve always tried to make a human connection. That’s my responsibility, I think. I shake hands, I hug people, I grab men and women by the shoulders and say, ‘You can do this’ …it’s the way I’ve always been. It’s the way I’ve tried to show I care about them and I’m listening,” he said.

Joe Biden apologizes, ‘will be more mindful in the future’ https://t.co/M1fSH6ncbm pic.twitter.com/JpN5TvvRKs

Christina Cauterucci, a liberal feminist who at the time worked at Slate, was unimpressed.

“Joe Biden’s Condescending ‘Social Norms’ Video Will Easily Appease His Base,” a headline for a piece she wrote reads.

“The solemn-yet-casual tone of the video is that of a befuddled, beleaguered, determined-to-love-you relative being forced to apologize (though Biden does not) for embarrassing his grandchildren by hugging them in front of their friends,” the actual piece itself reads.

“The misdirection doesn’t end there. He also shouts out the ‘scores, if not hundreds’ of people who have come to him ‘for solace and comfort’ after a tragic event, since Biden has faced more than his share of personal tragedy. But none of the women who’ve said Biden touched them inappropriately and without consent was dealing with tragedy.”

Cauterucci’s core argument was that the speech was bullschiff but that Biden’s base would believe him.

It’s been two long years, and the then-contributor and now-president has continued to behave inappropriately toward women AND children on numerous, numerous, numerous occasions. And just like in 2019, he has yet to be truly held accountable. Though what happened Friday does certainly mark the first time that one of his victims has ever fought back with a Bruce Lee-grade karate chop.