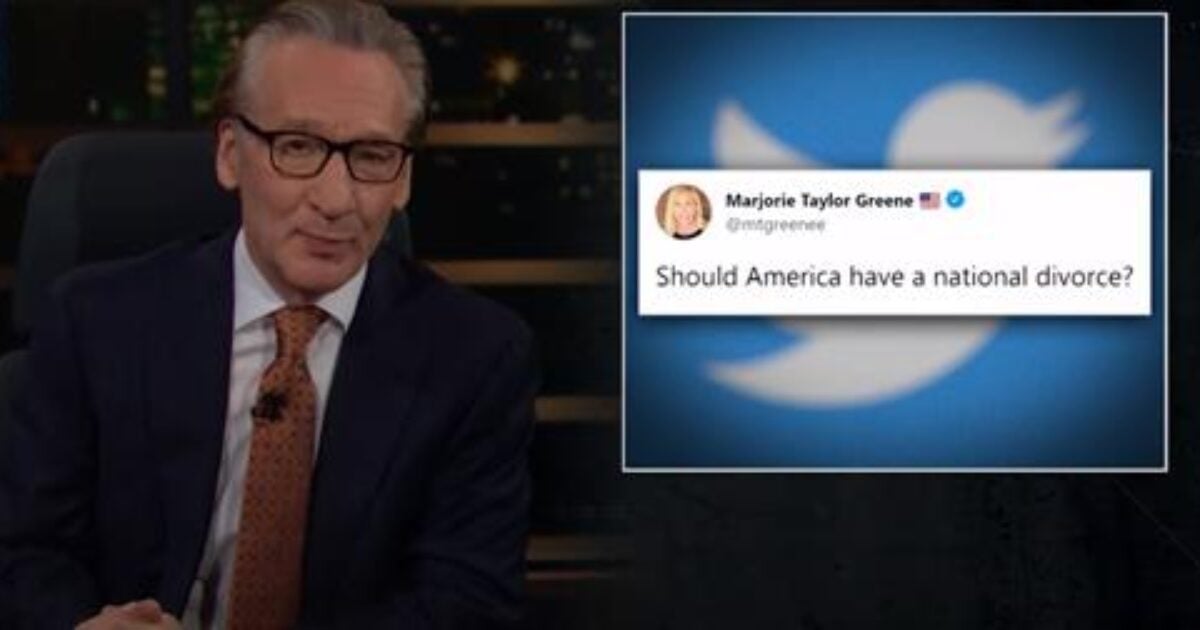 In a monologue ostensibly about dialing down the tension in America, left-wing comedian Bill Maher on Friday advised his viewers to stop hating one another.

However, it’s unclear whether his message really worked. Because, although the core idea of encouraging Americans to stop being so hateful toward one another was legit, the way he framed this idea seemed unnecessarily hyperbolic and incendiary.

For instance, he warned Democrats to stop wishing death on Republicans — which by itself is a good idea — on the basis that Republicans are a bunch of over-armed lunatics who hate them and want to kill them. Say what now?

He offered this controversial take while addressing a question that had been posted to Twitter a week earlier by Georgia Rep. Marjorie Taylor Greene.

“Should America have a national divorce?” the question read.

Should America have a national divorce?

While Maher made a point of noting that he personally doesn’t care an iota for the congresswoman, he stressed that there was merit to analyzing her question.

“Her question does represent the thinking of a lot of Americans on both sides. Ben Shapiro floated the idea that our best hope now is a friendly separation of states. Sixty-six percent of Republicans in the south say they would support secession to join a new confederacy. Forty-one [percent] of Biden voters want to secede,” he said.

Oddly enough, he then switched his focus to former President Donald Trump, whom he’s alleged is secretly plotting some nefarious coup against America.

“I mentioned this … in our last show about how Trump is right now behind the scenes spending every waking moment making the changes needed to really steal the election next time. Because it’s either that or trying to win voters with ideas,” he said.

It’s not clear what “changes” the former president is “making,” especially given as he has no political power at the moment and is just an ordinary citizen.

“A lot of people hit me up after that editorial and said, you know what, you scared the **** out of me. Good, because now the question they’re asking is what can we do about this slow-moving coup. Great question, and here’s the answer. Many will not like it,” Maher continued.

“If we want to halt this descent into civil war, we have to stop hating each other. And the reason I say that many won’t like that answer is because the act of hating people you don’t exactly agree with has become so ingrained, so routine for so many people. I think if they stopped, they’d miss it. It’s become so normalized now,” he added.

Listen to the full segment:

It’s not clear whether it’s ever occurred to Maher that spreading fear-mongering conspiracy theories about one’s ideological opponents can breed more hate.

“We don’t even notice how often someone online is wishing someone dead. Anyone we disagree with about anything is evil incarnate, and every argument goes from zero to homicide. It doesn’t even have to be about anything important or consequential. You insulted ‘Gossip Girl?’ Prepare to die,” he continued.

“There’s a moment in my stand-up act these days where I asked the audience rhetorically what should happen to all of the people who enabled Trump when he was in office, and about half the time someone shouts out ‘kill them’ or ‘hang them.’ You know, besides the fact that wishing people dead is a terrible place for your mind to be, if you’re wishing them dead, you can be sure they’re wishing you dead,” he added.

Indeed, because for every action, there’s an equal and opposite reaction.

“Do you want a real war, liberals? Really? You think you’re going to win the ‘I want you dead war?’ You’re not. You’re gonna lose. They have way more guns, and they know how to use them. And with all due respect, no one can do hate like a right-wing conservative,” he then said.

Some evidence, in fact, suggests that the opposite is true, and “no one can do hate like a” left-wing liberal:

‘We got a Trumper’: Rioters cheer and celebrate after pro-police victim is shot dead in Portland https://t.co/LBSZYQKfdw via @BIZPACReview

Done with the jokes, Maher then got to the core of his argument.

“This past Saturday, I was in the great city of Pittsburgh, PA, and the man who drove me in from the airport was from Bosnia. He was there in Sarajevo in 1984 when they had the Olympics, and he left sometime after that city became a war-torn hellscape. And he said to me what I am seeing happening here now is exactly what I saw in Bosnia. Next-door neighbors who despise each other, he was telling me, that hate on this level, can only be sustained for so long before becoming actual war,” the comedian said.

“Last year a warehouse blew up in Beirut, Lebanon. Everyone agreed it was an accident. But last week there was a march calling for the removal of the judge investigating the incident, and it turned into a street fight with automatic rifles and rocket-propelled grenades. … Because when people despise each other, it doesn’t matter what the issues are. When someone hates you, they don’t hear what you’re saying, let alone want to work with you on an issue,” he added.

For some inexplicable reason, Maher chose at this point to start attacking Republicans with blatant smears and lies.

“Today’s Republicans don’t have issues. They have issues, just not like the ones they used to have — balanced budgets. They care about that about as much as they care about the new season of RuPaul’s drag race. ‘Owning the libs’ is the only issue,” he claimed.

“Obamacare wasn’t a horrible or radical policy. It was desperately needed by many of the people who fought it, but it came from the people they hated,” he continued, lying again.

For a man lecturing people about hate, he seemed awfully eager to inspire more hate by acting as if there isn’t a single legitimate argument against Obamacare — as if his version of the truth is the only version, and any criticism (exorbitant premiums, high deductibles, higher ER wait times, forcing people to pay for coverage they don’t need, increased taxes) is the figment of someone’s imagination.

“Democrats keep thinking they can win over voters who hate them with better policies. You’re dreaming. Democrats are always asking why do Republicans vote against their economic interests. Because they hate you,” Maher continued.

It’s not clear why he thinks higher taxes, higher prices, the elimination of freelance work, the gutting of due process, etc., are somehow good for Republican voters.

While Maher seemed to have a good initial point — that Americans need to stop hating one another — it appears he couldn’t help falling down the rabbit hole of hatred himself.