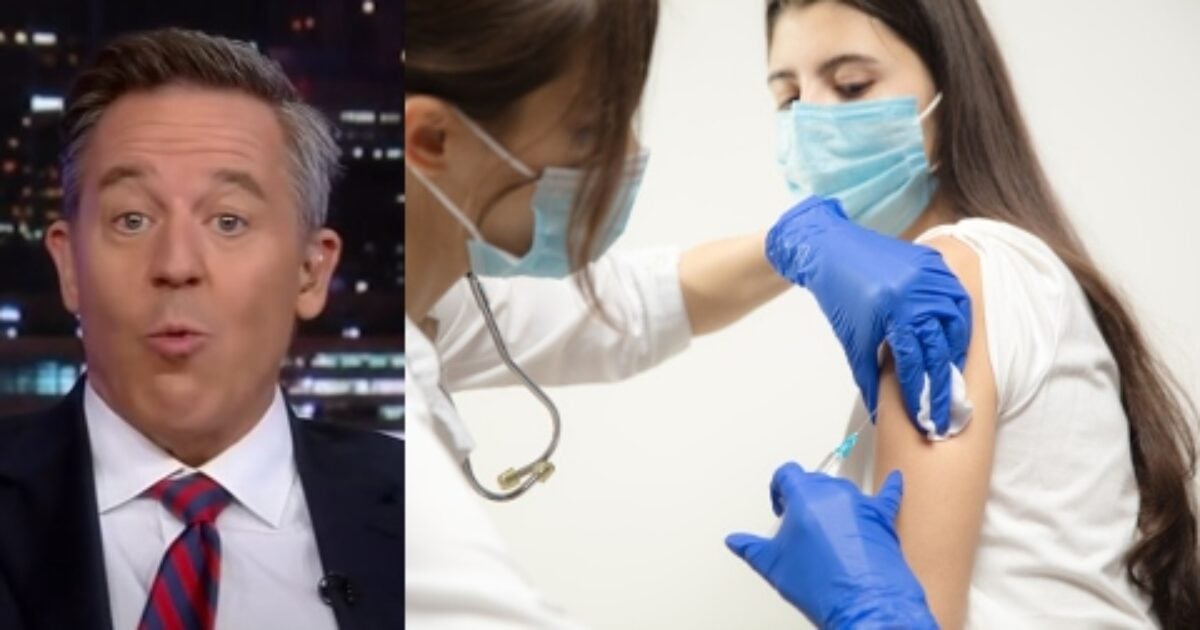 Fox News host Greg Gutfeld has a theory about the vaccine battle currently raging across the United States.

Speaking Friday on his highly rated late-night show, Fox News’ “Gutfeld!” he theorized that the battle is just another “artificial” conflict being purposefully ginned up by the elites to keep the American people at each other’s throats.

As an example, he pointed to the rage emanating from fellow Fox News contributor Geraldo Rivera, who lately has been ranting and raving like a maniac about those Americans who refuse to get the coronavirus vaccine.

On Thursday’s episode of “The Five,” Rivera went in especially hard on NBA player Kyrie Irving for refusing to get vaccinated, calling him “foolish” and claiming “he’s hurting himself, he’s hurting everybody.”

At the time, Gutfeld told the raging Fox News contributor that he was “being played.”

The following evening on “Gutfeld!” he explained how.

“But the anger’s misplaced. It’s fury manufactured by the establishment, who are scared to death of liability, and therefore risk. But they’re also terrified of you and me, or me and Geraldo — if we happen to agree. Which is hard to do when you’re looking at that mustache. That thing’s a whole different kind of 2-pointer,” he added.

It appears his point was that, by training Americans like Rivera to bark at their political opponents, the elites are able to distract people from the real issues — such as their ongoing attempt to silence all dissenting thought, as just one example.

“But if we all got along despite our political, health or height differences, it makes it that much harder for the aristocracy to control you and for the media to make a buck. The people in power lose power when we resist the traps they set for us,” Gutfeld continued.

And the vaccine battle is one of many, many, many traps they’ve set. According to the Fox News host, another prime example is the factually inaccurate racial narrative that they’ve used to smear the police.

“Others wish to pit the sexes against each other cuz it makes careers in academia, and jobs for people in human resources. They do this with gays and straights, trans and gays, dogs and cats, Fox and Friends,” Gutfeld continued.

“Conflict sells. That’s why every good Bond film has a Bond villain. And it’s why CNN, The View, MSNBC suck. While we push each other around in the streets, they’re raking it in with their clickbait. If only we got along. Their jobs vanish faster than a story on Hunter’s laptop -and the people’s power grows,” he added.

And the latest fake “conflict,” he maintained, is the fight between the vaccinated and the unvaccinated.

It’s a fight that’s been ginned up the most by the Biden administration, which has claimed in contradiction of all real scientific evidence that the vaccinated must be protected from the unvaccinated.

By doing so, the administration has turned some Americans into angry zealots like Rivera, a man who just recently accused congressional Republicans of getting “sexual pleasure” from airports being gutted by the Biden administration’s vaccine mandate:

But why the anger, Gutfeld wondered.

“Take the NBA player — seriously, why get mad over someone you don’t even know, who is making a decision for himself? Unless it’s something like talking loudly on a cell phone in a movie theater. In that case, stab the jerk! Don’t stab the jerk; that’s a joke,” he said.

“But other than that, just realize it’s CNN and the Biden administration is trolling you and us. Right now, it’s kinda clear that someone who’s young, lean, and incredibly fit such as Kyrie — and myself — does not have the same risk profile as someone with a pre-existing condition,” he added.

This is true. The risk of succumbing to complications from COVID drop drastically the lower the age and the fewer the pre-existing conditions.

Another great chart that puts covid death risk by age in proportion to other causes. College kids are more likely to die driving to campus for workouts than they are from the coronavirus. pic.twitter.com/6ntWmaIsoD

What remains unclear is whether contracting the virus poses a lower risk than suffering a side effect — potentially a fatal one — from getting vaccinated.

What is certainly clear, Gutfeld noted, is that regardless of the decision Irving makes for himself, he poses no risk to anyone at Fox News.

“[H]e poses no threat to Geraldo, or me, or our families. But we are living in a time of conformity, and when you don’t conform, you’re shunned like Jerrold Nadler skinny dipping at a public pool,” he noted.

Yet, the Fox News host continued, the best bet is to indeed not confirm — not necessarily by not getting the vaccine (that’s up to each person), but by not joining the mindless mobs who’re out to shame and defame those who do choose to not get vaccinated.

“So whenever you feel yourself getting angry at someone else and you’re only given two choices — it’s a binary prison of ideas — remember that it’s a desired phenomenon created by a third party. It creates content for TV producers and it distracts the populace from the real bad s–t that’s going on, like crime, mental illness and my relentless IBS caused by swallowing class rings,” Gutfeld said.

“If we fight amongst ourselves, we can’t fight them. And they can continue ignoring real injustice, and get rich off us along the way. So mandates became just another tool to split us apart. But the media’s argument that there has to be a deep-seated hatred amongst Americans is much like Al Capone’s vault. Once you crack it open there’s nothing really there. And once you see it, you can’t unsee it,” he added.

He concluded the segment with a joke about Rivera: “Much like when you see Geraldo shirtless. Sadly, there’s no vaccine for that.”