This Richfield Public Schools’ curriculum, known as 3Rs, has recently attracted widespread attention because of just how radical it appears to be. One exercise included in the curriculum calls for pairs of students to role play as homosexual lovers.

“One activity in the curriculum directs a male student to pretend his name is ‘Morgan,’ a boy who is ‘very active’ in his school’s LGBTQ club, while another student pretends to be ‘Terence,’ a closet homosexual who wants to have sex with Morgan,” according to Alpha News, a local independent news outlet that broke the story on Thursday.

“In this scenario, Morgan plans a secret rendezvous and the two role-playing students are asked to ‘make a decision about whether to have sex,'” the site’s report continues.

The curriculum further includes a teacher’s note warning that “if two cisgender, heterosexual boys end up randomly being assigned to each other, it is possible they will have a homophobic response” that would need to be nipped in the bud.

According to Alpha News, 3Rs is a form of “comprehensive sexual education” (CSE), a term used to basically describe “progressive”-styled sexual education. 3Rs itself is short for “Rights, Respect, Responsibility.”

This curriculum has reportedly been spotted in other cities and states as well, according to the Family Watch International nonprofit. In response to the rise of “CES” curriculum, the nonprofit launched a website, “Stop CES.” The website contains a 30-page list of some of the most controversial exercises/lessons included in the 3Rs curriculum.

Below are screenshots of the part concerning gay sex: 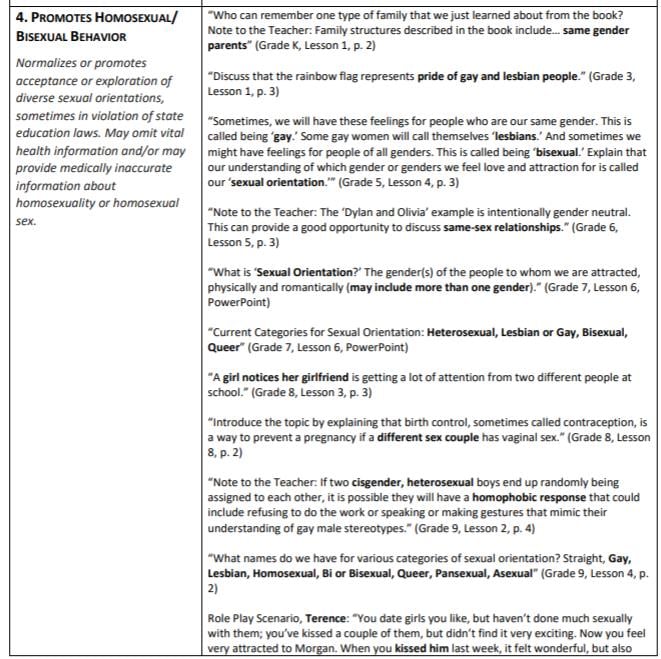 The screenshots above are just the tip of the iceberg.

The discovery that 3Rs is being used in Richfield Public Schools provoked an outcry from local parents who then rushed to a school board meeting on Monday to share their concerns.

“Everyone deserves to be treated with kindness and respect no matter their race, gender, religion or sexual orientation, but this curriculum goes far beyond teaching respect and tolerance and is intentionally confusing children about their gender and sexual orientation,” the parent added.

The parent also accused the administration of deceiving parents by misleading them “about what their children are being taught.”

Board chair Tom Pollis reportedly responded to the concerns by arguing that they’ve used the curriculum “for a number of years” and that parents are able to opt out.

In a subsequent statement to the Daily Mail, a Richfield Public Schools spokesperson, Jennifer Valley, further defended the district by arguing that not all parts of the curriculum are being used.

“Valley said only a portion of the 3R’s is used in kindergarten, and it does not include role-play exercises. At the secondary level, role-play scenarios might be used, but not the ones included in the 3R’s, she said,” according to the Daily Mail.

“At the K-5 level, our licensed school social workers teach students one to two age-appropriate health and safety lessons per classroom that align with national education standards. Topics may include the anatomically correct names for body parts, a person’s right to keep their body safe by expressing their level of comfort with touch, and identifying a safe adult to confide in if needed,” Valley reportedly said.

But some parents argue that NONE of the curriculum should be taught to children — not in Minnesota and not, in fact, anywhere in the country.

Yet on Twitter, you can find multitudes of far-left teachers, school officials, and school associations nationwide actively promoting the curriculum:

Did you know that @AdvocatesTweets has a wonderful, free #SexEd curriculum called “3Rs: Rights, Respect, Responsibility” and that they have a bunch of fresh lessons for 2021? https://t.co/JnDH4KTJXk pic.twitter.com/UJSZhy9rq0

As we continue to celebrate equity, diversity and inclusion during #PrideMonth2021 Check out these amazing, standards-aligned lessons from the 3rs curriculum (Rights, Respect, Responsibility on LGBTQ+ from @AdvocatesTweets 👉https://t.co/CgoICcyObi pic.twitter.com/7W5WrBRc9G