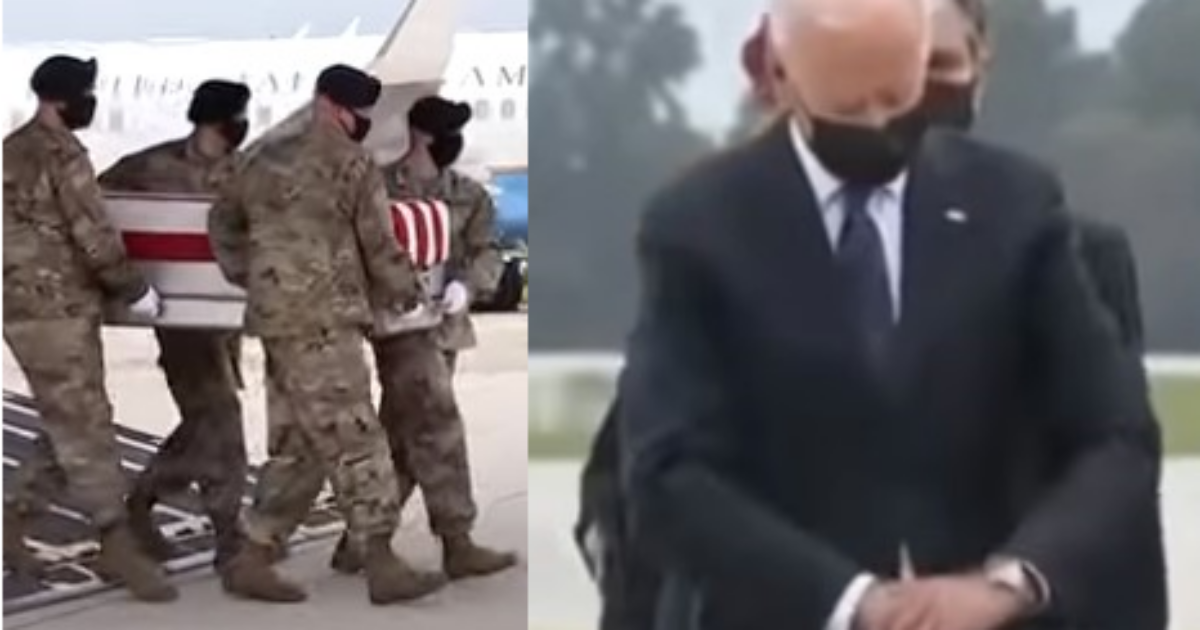 President Joe Biden has been under heavy fire for the disastrous withdrawal from Afghanistan and critics turned up the heat another few notches in the aftermath of an inconceivable display of cluelessness on his part when he showed up at a ceremony to honor the 13 military members who were killed by a terrorist suicide bomber.

On Sunday, the fallen heroes arrived back home in flag-draped caskets thanks to the administration’s spectacularly inept evacuation from Kabul that turned deadly last week when the blast ripped through an area outside of Hamid Karzai International Airport, a bloody exclamation point on a foreign policy failure what will reverberate for decades.

Biden met with the families of those military members whose young lives were tragically cut short as a result of his own incompetence but was soon engulfed by a firestorm of criticism when, during the “dignified transfer” at Dover Air Force Base as troops unloaded the sad cargo from a transport plane, he appeared to glance at his watch to check the time, an unconscionable gesture of disrespect to those who made the ultimate sacrifice in service to their country.

WATCH: Joe Biden looks at his watch during the dignified transfer of 13 service members killed in Afghanistan. Disgraceful. pic.twitter.com/tEHnrMmapi

The horrendously bad optics of the “leader” of the free world appearing to have better things to do than to pay tribute to the war dead is one that likely had Biden’s handlers screaming at the sky after yet another unforced error by the big guy.

Biden was joined by his wife Dr. Jill Biden along with the disgraced top Pentagon brass, including Defense Secretary Lloyd Austin whose priorities of “woke” virtue signaling distracted them from their true mission with deadly consequences.

Disgustingly, not even a somber occasion to honor American troops who died in the line of duty was free from the standard political spin as the entire motley crew all wore their signature black facemasks outside on the tarmac.

Biden’s watch-gazing led to a brutal Twitter scourging for a man who has taken a wrecking ball to America in just his first seven months in office and is just getting started.

Apparently our Commander-in-Chief has better things to do than honor the 13 service members who died on his watch? I’m DISGUSTED! God bless these heroes and their loved ones. They deserved better. pic.twitter.com/Ciuymtby3N

Many of us remember Pres Bush 41 checking his watch during a debate and how awful it looked (even though we all felt same way about that debate.) But this is shocking and will be remembered. https://t.co/sFfW032JNm

Wearing a mask outdoors when he’s already been vaccinated. Smh

He just had to pee real bad

These criminals — Biden, Obama, Hillary — love going to Dover to watch the flag-draped caskets of our young soldiers coming home … They create the mess and death and then line up for a photo op. Sick bastards.

Biden’s defenders attempted to dismiss the astonishing breach of decorum by claiming that the watch belonged to his dead son Beau who died from brain cancer, always a convenient crutch for the doddering White House occupant and his sycophantic apologists.

A watch belonging to his son Beau. But you are too quick to smear this man to ever take the time know why he did it.

Are you aware that it’s his late son’s watch? He maybe looking at it to remind him that he lost his son.

But that is just another one of the big lies that are the coin of the realm for the administration.

With each passing day, it becomes increasingly apparent that Biden’s presidency is in serious trouble, some like Professor Joe Siracusa of Curtin University are predicting that “He’s finished” after the debacle in Afghanistan and a growing majority of the American people would tend to agree.