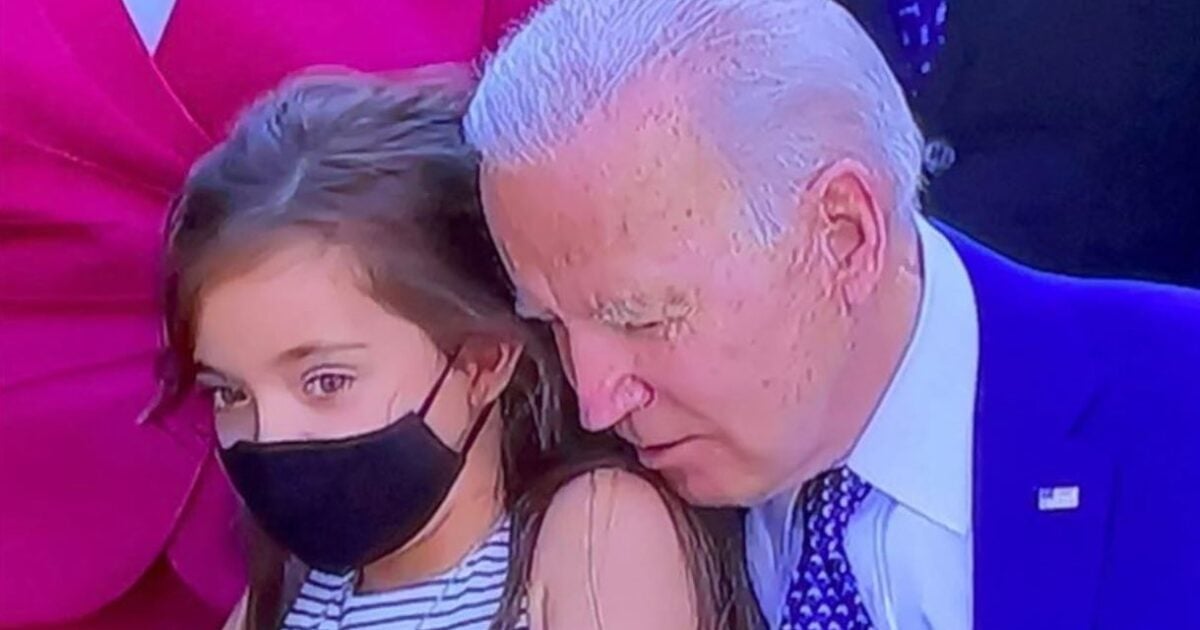 As President Joe Biden signed a bill awarding congressional gold medals to police officers who responded to the  January 6 Capitol riot, children were in attendance for a photo-op and they were strangely the only ones wearing masks outside.

The masks were not the only odd thing at the ceremony.

Biden singled out and called over a little girl while he was preparing to sign the bill, getting close and personal with the child as he did so. Many noted the child looked extremely uncomfortable, with social media comments reacting to the “creepy” and “uncomfortable” visual.

The whole scene was strange and disturbing. Evidently, the confusing mask mandates at the White House are still ever-changing. It appears the children were wearing masks because they are still too young to be vaccinated against COVID-19 and the adults did not wear masks because they have already been inoculated.

Biden spots a little girl out of the crowd, calls her over to sit on his lap, then tries to sniff her pic.twitter.com/0W0K4lADFL

Tom Elliott of Grabien Media astutely tweeted, “New rule: Only kids need to wear masks outside.” That appears to be the case right now.

New rule: Only kids need to wear masks outside pic.twitter.com/gyFgC8ldSO

On July 29, the President referred to new CDC guidelines that urge mask-wearing indoors: “The CDC recommends you wear a mask when you’re in public and indoors, like work or in a grocery store. That’s true for both the vaccinated and the unvaccinated. Why? Because even if you’ve been fully vaccinated and protected from severe illness from COVID-19, you could have the Delta Variant in your system and spread it to someone who isn’t vaccinated.”

He added, “We need to wear masks to protect each other and to stop the rapid spread of this virus as we work to get more people vaccinated.”

However, people were reportedly not told to wear masks outdoors and that includes children. As for the edict indoors, sometimes officials are wearing masks, and sometimes they aren’t adding to the overall confusion and a “do as I say, not as I do” atmosphere in America.

Children were placed strategically around Biden as he conducted the signing of legislation that awarded Capitol Police and Washington’s Metropolitan Police Department congressional gold medals. The President then urged the nation to not rewrite the history of that day. It was sheer propaganda for the masses and staged in every detail.

The legislation disingenuously touted those who stood against former President Trump’s so-called mob of supporters that stormed the Capitol on Jan. 6.

Biden and Vice President Harris held the scripted ceremony in the White House Rose Garden with a number of police officers and lawmakers in attendance to commemorate the signing. Their families were there as well with masked children mingling and posing for the ceremony.

“While the attack on our values and our votes shocked and saddened the nation, our democracy did survive. It did. Truth defeated lies. We did overcome,” Biden solemnly intoned.

The law orders that the medals be placed in four locations: Capitol Police headquarters, the Metropolitan Police Department, the U.S. Capitol, and the Smithsonian Institution.

“Fellow Americans, the tragedy that day deserves the truth, above all else. We cannot allow history to be rewritten. We cannot allow the heroism of these officers to be forgotten,” Biden proclaimed to the media and those in attendance.

Those on social media noticed that the children were strangely wearing masks and that Biden singled out the little girl:

No one knows WTH to do.

These mfkrs are just making shit up as they go.

This makes no damn sense. 😡

It’s to keep Biden from spreading his cold sore.

Only if they’re within the Big Guy’s reach.

This ain’t funny. That child looks genuinely uncomfortable and scared. This messed up. You just don’t pull a child who is not your own in that close. What the hell. What is wrong with this man.

That’s one of the creepiest things I’ve ever seen. Then I remembered that’s our POTUS.

Parents still let their kids around this guy?

He could literally play the ‘Creepy Old Guy’ role in any movie ever made the way he looks right there. Holy shit that is terrifying. I think the kids are wearing masks so no one will see their silent screams of horror.