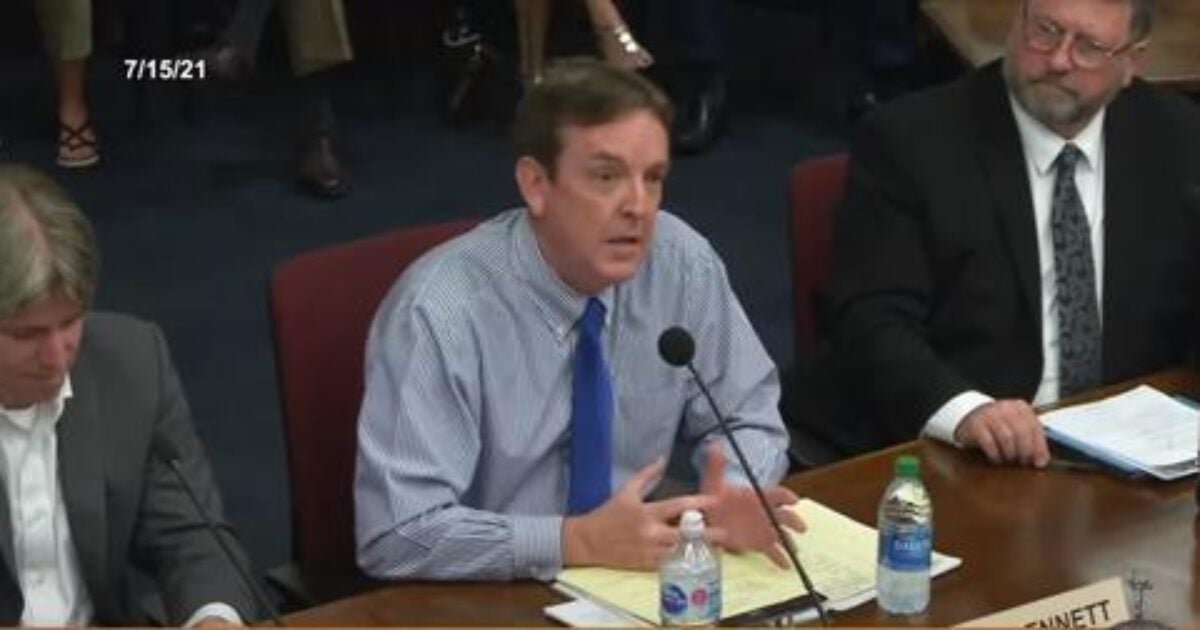 **UPDATE: This post has been updated to reflect the dispute from Maricopa County which refuted many of the claims made by auditors at the hearing initially reported in this article.**

Three men who on Thursday briefed Republican Arizona state senators about the ongoing audit of Maricopa County’s election results subsequently had to be escorted out of the building because of safety concerns.

At the end of the roughly two-hour hearing, Arizona Senate President Karen Fann said briefly that everybody else would need to wait a moment before leaving so that the three men could first be escorted out for their safety.

“Before we adjourn, I would like security please to escort these three men out for security reasons. We were instructed that we need to let them out first,” she said.

Watch from about the 4:14 mark below, and take note of how the room burst into applause as the men made their exit.

While the nature of the security threat was not specified, it’s known that all three men have faced relentless attacks from the mainstream press for participating in the audit.

In Thursday’s testimony, the men provided “a lot of technical descriptions about election and audit procedures, a smattering of allegations of potential issues and discrepancies, and concerns about Maricopa County’s refusal to turn over certain requested items,” according to local FM station KTAR.

“Thousands of names were added to the voting rolls after election day, but are recorded as casting a ballot in the 2020 election,” Logan claimed at one point.

However, the three reportedly need more information from Maricopa County to continue and ultimately complete their audit, but the county is refusing to comply.

“Auditors want passwords the county says it doesn’t have, and they also want computer network equipment directly related to the election and a complete copy of the Maricopa County voter registration database,” according to Phoenix station KNXV.

During the hearing, Fann warned that legal action might be necessary.

“I just want to state that at no time have we ever implied or inferred that there is any intentional misdoings here in any way whatsoever, and in fact, we certainly hope not. But we do need to have this information and answer these questions so that we can make sure that the voters of Arizona have solid answers as to how our election system works, the check-and-balances, to know that they have a safe and secure ballot,” she said.

She also emphasized that the audit isn’t about former President Donald Trump or overturning the 2020 presidential election.

“The important thing that we wanted to make sure that everybody knew, which we told you as well at the beginning, is this is not about Trump. This is not about overturning the election. This has never been about anything other than election integrity,” she said earlier in the hearing.

Watch the full hearing below, starting from around 3:18:22:

The audit was authorized by Arizona Senate Republicans after they won a court battle against the Maricopa County Board of Supervisors “over access to equipment and approximately 2.1 million ballots from the November 2020 election,” according to KTAR.

Cyber Ninjas was then hired to lead the effort. Cyber Ninjas, in turn, sub-contracted CyFIR to perform some of the work.

All this was done despite the GOP-led Maricopa County Board of Supervisors having reportedly already conducted two audits of its own.

The board still maintains that there are no problems. In fact, the board spent the entire two-hour hearing ostensibly fact-checking the three men on Twitter and, in a lengthy rebuttal the next day, refuted many of the claims, saying they “were not based in fact.”

A lot of what is being shared at this “hearing” was in the Antrim County, MI report which has been debunked.

Finally, baseless allegations from Ben Cotton (who is not EAC certified) are ridiculous coming from the guy who falsely said we deleted files and then had to walk it back at the last one of these hearings.

“The private companies hired by Arizona Republicans to audit the 2020 election results admitted Tuesday that the data they accused Maricopa County of deleting had been found,” NBC News reported in late May.

On Thursday, the board also released a statement from chair Jack Sellers accusing Logan, Cotton, and Kennett of being grossly incompetent.

“It’s clear the people hired by Arizona Senate leadership to supposedly bring integrity to our elections are instead just bringing incompetence.”

The men did not seem fazed by the attack.

Logan, for his part, encouraged the Arizona Senate to start going door to door to speak directly with voters and obtain the answers that the board is refusing to supply.