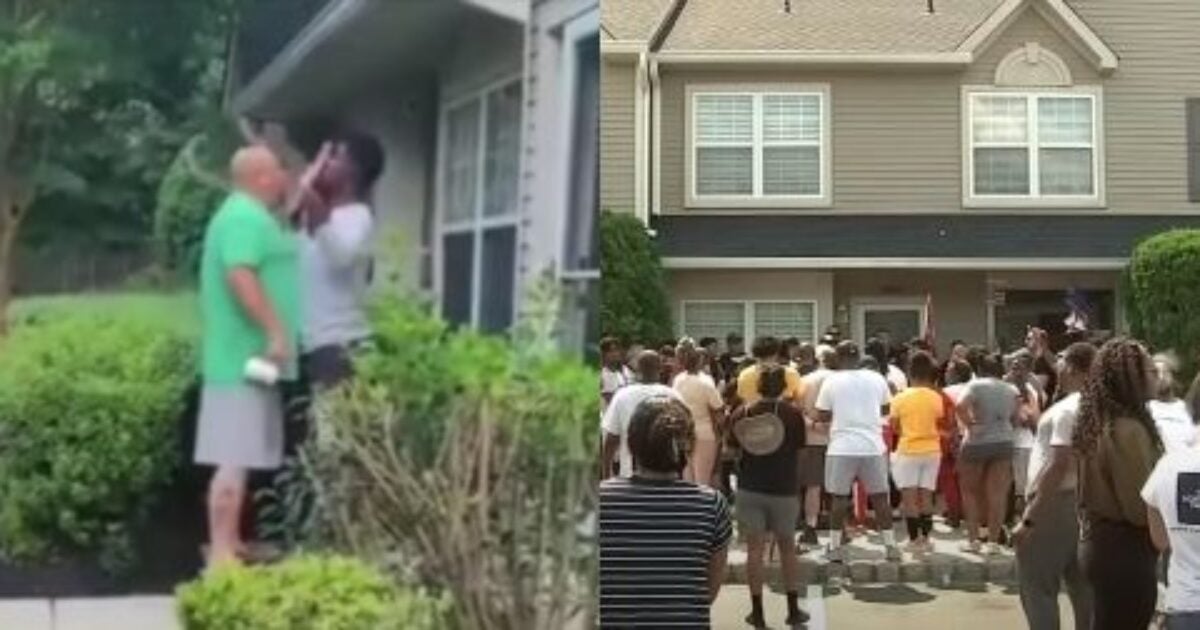 An angry, violent mob of more than 100 protesters surrounded the home of a New Jersey man on Monday who went on a racist rant against one of his neighbors and was later arrested by the police.

It all started with a now-viral video on July 2nd that showed Edward Cagney Mathews, 45, getting in the face of one of his neighbors and hurling racial slurs at him. Mathews gets nose to nose with the black neighbor and tells him to “learn your laws. This is not Africa … or wherever the f**k you were.” During the encounter, he used the n-word numerous times and called the other man a “monkey.”

“I was born in America,” the neighbor angrily informed him, “and I don’t give a s**t about you.”

Police then received a call around 8 p.m. from one of Mathews’ neighbors who claimed that she and her family were being “continually harassed” by the man.

Mathews ordered a police officer who arrived on the scene to “go talk to these f**king n*****s.” The officer told him to stop and Mathews in turn told the policeman, “F**k you, go talk to the n*****s and let ’em know what I’m all about and what f**king rights they have.”

He refused to go back inside his home and defiantly took a stance within sight of the neighbor’s home he had just gone to. “I’ll stand right here, it’s common property,” he declared.

“I’m not going away until your husband stops f**king finding me and threatening me while I’m at f**king work,” Mathews yelled at the family as the officer spoke with them. The officer told him to “cut it out, man,” and he proceeded to hurl another racial slur, yelling “f**king n*****s!” before he walked away. “Cut it out, Cagney, go home,” the officer told him when he came back to the scene.

Following the encounter, demonstrators started showing up en masse at the man’s home. As the mob closed in on the house waving Black Lives Matter flags and raising their fists in unity, Mathews tried to address the crowd at his Mount Laurel home. Police forced him back inside to prevent a violent confrontation. Later, the officers walked him out to an SUV as demonstrators threw water and juice bottles at the vehicle and the police before they drove away. Ten to fifteen police officers also claimed that they were hit with pepper spray.

Mathews was reportedly charged with harassment and biased intimidation for his racist verbal attack on his neighbor. He was released on Friday.

The confrontation had been brewing for months involving issues with the HOA board representing the development, WPVI reported.

Mathews has reportedly harrassed non-white residents for some time.

“The guy is off his rocker and they need to get him out,” Aliya Robinson told Fox 29. “He cannot be racially harassing and assaulting people, spitting on people, busting down doors, breaking windows, and writing ‘White lives matter’ on stuff.”

Her daughter has also had run-ins with Mathews.

“When we first moved there, I guess he didn’t think minorities should live there, so he kicked my door in with my children there,” she claimed.

The Southern Burlington NAACP is now stepping into the fray. President Marcus Sibley is demanding that additional charges be filed against Mathews because of his history of racism according to NJ.com.

“We’ve seen people get shot for less,” Sibley pronounced. “And he [Mathews] not only used one of the most demeaning terms you can give to a black person, he said it with no hesitation, but he also said it once the police officer came and cursed at the police officer.”

In Mount Laurel where protesters amassed outside the home of a man who was charged after a video of him using racist slurs against a neighbor Friday went viral. Hours into the tense standoff, with cops posted at the guy's door, they walked him out into the crowd. #MountLaurel pic.twitter.com/adn7TEMi99

HAPPENING NOW: Protestors have gathered outside the home a Mt. Laurel NJ man captured on video shouting offensive and racist slurs at his neighbors.

Mathews is out of his home. He was escorted out by Mt Laurel Police. He’s in police custody @6abc https://t.co/V00d4lJk7X pic.twitter.com/s7GHVDLAyO

Police officers then try to clear the area with riot gear and shields. People throw objects and dump trash outside of the man’s house.@NBCPhiladelphia https://t.co/D6Ks1umlE2 pic.twitter.com/9HiNKJlite

“We’re not just going to let him harass people, especially Black people within this community or any community,” said protester John Clayton of Cinnaminson.

“The Mount Laurel Police Department does not tolerate hate or bias intimidation in any form … We can assure our residents that incidents like this are thoroughly investigated and that those who commit such offenses will be held accountable for their actions,” the department stated.

“To say that we are appalled by the disturbing and vicious act of hate which was caught on camera would be an understatement,” Mount Laurel’s mayor and town council proclaimed in a statement. “This man’s actions do not reflect who we are as a community nor our values. Nobody should be made to feel unsafe or unwelcome in their own neighborhood let alone in their hometown … this is not who we are and what our township stands for.”

For Mathews’ part, he contends he’s not a racist according to Philadelphia’s NBC10. “I’ve never been a racist,” he stated. “I’ve made mistakes, said racial slurs out of anger or being drunk. I may not be able to relate to communities of color but I am not a racist and I have the utmost respect for us as a community.”