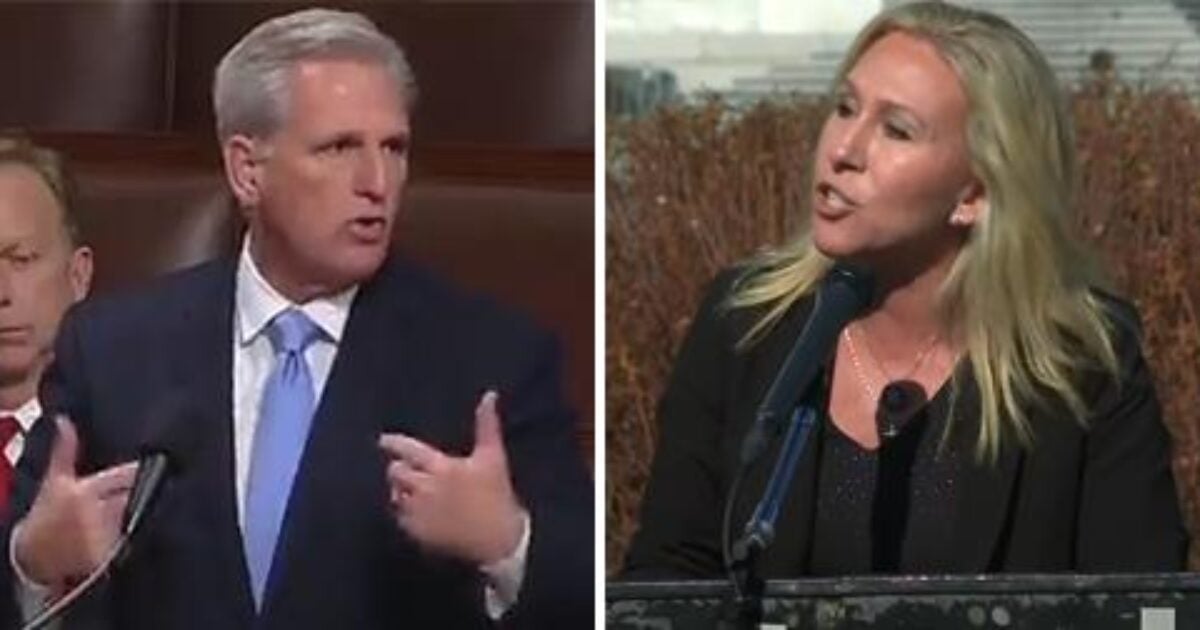 Sixty-seven House Republicans joined with their Democrat colleagues Tuesday evening to vote in favor of a bill calling for the removal of all Confederate statues from the U.S. Capitol.

Among those who voted with Democrats was House Minority Leader Kevin McCarthy, who went so far as to deliver a speech noting that every statue chosen for removal was of a Democrat.

“The bill we’re voting on today we’ve voted on before, and I supported it. And I support it now. But let me state a simple fact: All the statues being removed by this bill are statues of Democrats,” he said.

He then added, “I think the bill should go further. Maybe it’s time the Democrats changed the name of their party.”

GOP Leader McCarthy during debate on a bill to remove Confederate statues from the Capitol:

“All of the statues being removed by this bill are statues of Democrats… Maybe it’s time the Democrats change the name of their party.” pic.twitter.com/0RA6ubLuYT

He continued by arguing that the Democrats’ embrace of divisive critical race theory propaganda proves that they haven’t learned anything in the past 200 years.

“Today the Democrat Party has doubled down on what I consider a shameful history by replacing the racism of the past with the racism of Critical Race Theory. They continue to look at race as the primary means of judging a person’s character,” he said.

“We saw this just last week. Senate Democrats voted to confirm one of President Biden’s appointees who said, ‘we must do everything in our collective power to realize Dr. Kendi’s vision for America,” McCarthy added.

Critics claim CRT advocate Ibram X. Kendi is a black supremacist who explicitly argues that because of America’s PAST sins, white Americans alive today deserve to be discriminated against with the same fervor applied by the anti-black racists of the Jim Crow era.

So McCarthy’s argument was basically that removing the historical statues was a good idea because they were essentially tributes to Democrats, and because their removal gave him an opening to slam Democrats for their continued racial essentialism.

However, a majority of Republicans disagreed with him. Among the 120 Republicans who voted against the measure were Elise Stefanik, Lauren Boebert, Matt Gaetz, Paul Gosar, Marjorie Taylor Greene and Jim Jordan, as seen in the official roll call here.

Greene called it a “power grab by Democrats” and warned that the tearing down of historical statues has always gone hand in hand with the rise of totalitarianism.

All the tyrants throughout history tear down statues and attempt to erase history in order to reign with an iron fist.

I’m opposed to HR 3005, the latest power grab by Democrats.

“The South lost, and our Union is strong today, and the great victory of our constitutional government in the Civil War over slavery and secession should be celebrated,” he said in a statement.

“Unfortunately, Democrats, animated by the Critical Race Theory concepts of structural racism, microaggressions, and a United States based solely on white supremacy, have chosen to remove statues that underscore the failures of our pre-1861 Constitution. Make no mistake, those who won the West and George Washington are next,” he added.

In a statement of his own, Alabama Rep. Mo Brooks called the bill another example of the “intolerant Socialist Democrats” in action and echoed Greene’s warning about the erasure of history always coinciding with a rise in totalitarianism.

“Cancel culture and historical revisionism are precursors to dictatorial government and the destruction of individual liberty and freedom by elitists who claim they know more than regular citizens and, hence, should be empowered to dictate what regular citizens can and cannot think or do,” he said.

“Ultimately, it’s all about political power in the hands of a dictatorial few coupled with the loss of freedom and liberty by the masses. I reject cancel culture and historical revisionism. I reject Socialist Democrat intolerance,” he added.

Cancel culture & historical revisionism are precursors to dictatorial government & the destruction of individual liberty & freedom by elitists who claim they know more than regular citizens & should be able to dictate what regular citizens can think or do. https://t.co/63HV28f1O6

It appears none of the Republicans who voiced opposition to the bill also voiced any displeasure with McCarthy over his zealous support for it.

The same could not be said of Richard Hanania of the Center for the Study of Partisanship and Ideology.

Look what he wrote below:

You’re not going to beat the brain worm of wokeness with the brain damage of whatever this is. https://t.co/8eZbCltWqf