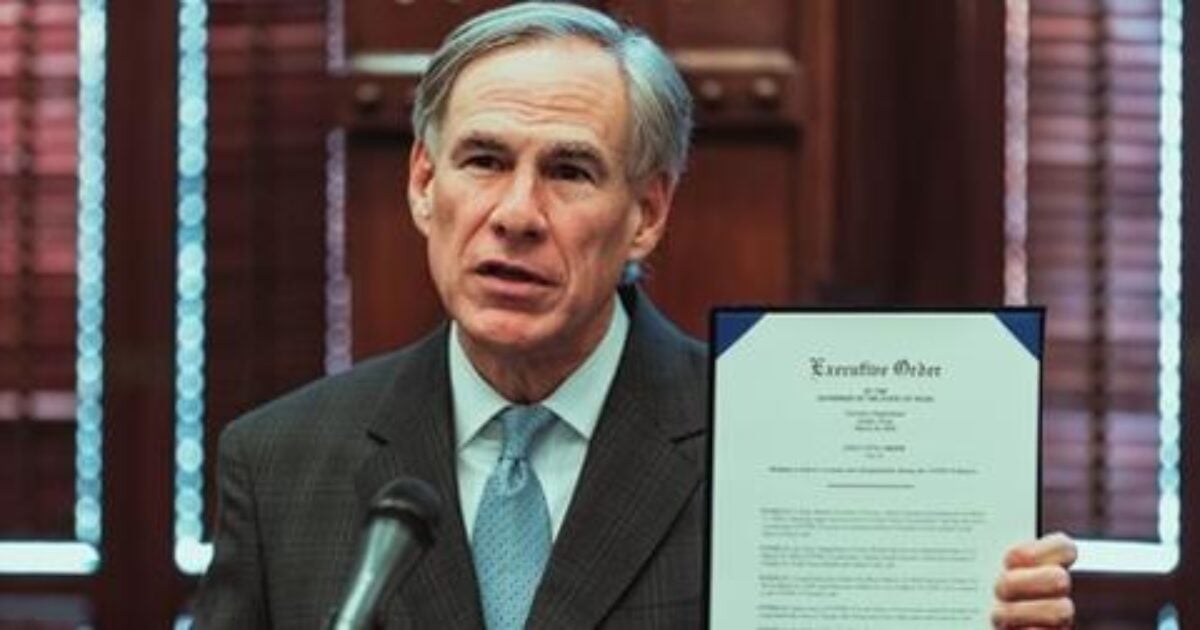 As a check on their power, Texas Gov. Greg Abbott has technically defunded the Texas Legislature by vetoing the budget provision responsible for their salaries.

On Friday the governor approved the state budget but purposefully vetoed Article X, which reportedly funds the legislature, as a means to discipline Texas Democrats for their stunts.

Last month they made headlines when they threw a fit and filed out of the state House’s chamber just before midnight on May 31 to protest an election reform bill that would have strengthened the state’s voting laws.

By leaving the chamber, they made it impossible for the GOP-led body to pass the bill. It wasn’t that the legislature lacked the votes to pass it but rather that the rules of the body stipulate that a certain number of legislators must be present for any vote to occur.

The governor responded at the time with a threat:

I will veto Article 10 of the budget passed by the legislature.

No pay for those who abandon their responsibilities.

“I will veto Article 10 of the budget passed by the legislature. … No pay for those who abandon their responsibilities,” he tweeted at the time.

In a statement issued after he rejected Article X on Friday, the governor made it clear that he intended to stick to his word.

“Texans don’t run from a legislative fight, and they don’t walk away from unfinished business. Funding should not be provided for those who quit their job early, leaving their state with unfinished business and exposing taxpayers to higher costs for an additional legislative session. I therefore object to and disapprove of these appropriations,” he said.

An Abbott spox confirms that the governor vetoed all of Article X, which funds #txlege.

In response to Abbott’s move, Democrats threw another fit, with Texas House Democratic Caucus chair Chris Turner issuing a statement accusing Abbott of waging a “dangerous attack on the separation of powers.

“Texas has a governor, not a dictator or emperor. The tyrannical veto of the legislative branch is the latest indication that Governor Greg Abbott is simply out of control. Abbott’s actions are an inexcusable and dangerous attack on the separation of powers, as his veto consolidates more power in his own office,” he reportedly said.

But critics would argue that Texas Democrats are the ones who’ve been attacking the separation of powers. The citizens of Texas voted Republicans into a majority in the Texas Legislature, yet Democrats chose to ignore their wishes by preventing this same majority from conducting its business and holding a vote.

Nevertheless, Turner vowed that his caucus “is exploring every option, including immediate legal options, to fight back against Greg Abbott’s abuse of power.”

To be fair, Texas Republicans have also been critical of the governor. After Abbott issued his threat on May 31, Texas House Speaker Dade Phelan, a Republican, warned that defunding the legislature would impact staffers.

“My only concern is how it impacts staff, especially those who live here in Austin, which is not an inexpensive place to live and raise your family and children,” he added.

Phelan also warned that vetoing Article X would most likely not even affect the pay of the actual Democrat legislators who’d pulled the stunt last month.

He “said he thinks that, under the Constitution, lawmakers would still have to be paid even if Abbott carried out his veto. Lawmakers are paid $600 a month in addition to a per diem of $221 every day the Legislature is in session, during both regular and special sessions,” according to The Texas Tribune.

Lawmakers still get paid, as I understand it. Staffers at #txlege and legislative agencies, who had nothing to do with the quorum break, presumably will not, after 8/31 https://t.co/TfxZpjL60d

At the time that Phelan made his remarks to the press earlier this month, Abbott dismissed his complaints by arguing that it’s contingent on him to get the job done.

If Phelan’s “concerned about it, he needs to do something about it,” he reportedly said.

“He has a role to play here. He’s not some outside viewer. He’s a participant, and he needs to step up and get the job done,” he added.

As of Saturday, over half a month since Democrats pulled their stunt, the election reform bill supported by a majority of the Texas Legislature had still not made it through the legislative body.