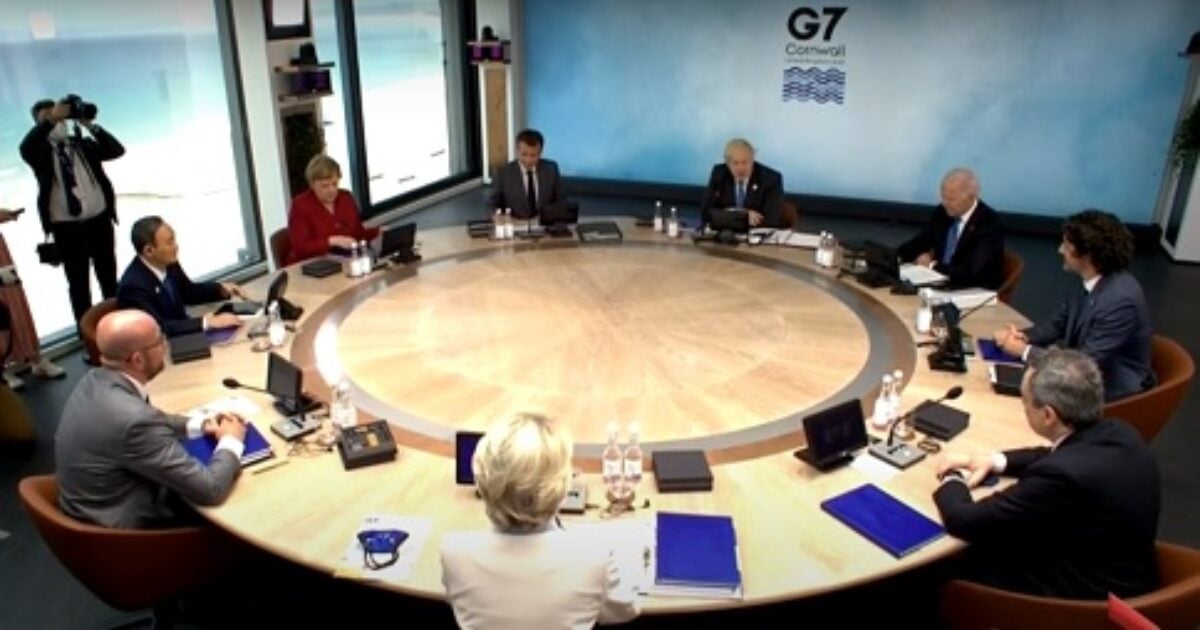 An English-language newspaper linked to China’s ruling Communist Party touted a political cartoon mocking the Last Supper, as depicted by Leonardo da Vinci’s mosaic while declaring the United States of America was “feeble” and will not last.

The Global Times reported that the anti-Christian, anti-West cartoon “went viral on Chinese social media on Sunday, when the G7 summit was underway in Cornwall, the UK.”

The newspaper claimed the G7 Leaders’ Summit  was “widely seen as an attempt by the US to rally allies against China.”

The cartoon was titled “The Last G-7,” and a social media user called the cartoonist a “genius” as they highlighted key details in a tweet.

“This Chinese artist is really a genius, and here is all the details that I have found in this work,” the tweet stated.

#G7 #China
This Chinese artist is really a genius, and here is all the details that I have found in this work.

More on the political cartoon from the CCP-linked newspaper:

Similar to the final meal Jesus shared with his apostles before his crucifixion that The Last Supper depicted, Bantonglaoatang painted a vivid picture of nine animals – respectively representing the US, the UK, Italy, Canada, Japan, Germany, France, Australia and India – sitting around a table with a Chinese-map-shaped cake on it. On top of the painting is the words in quote: Through this we can still rule the world. […]

Wearing a bowler hat with an American flag on it, a bald eagle sits in the middle like Jesus in The Last Supper, obviously the convenor of the meal. In front of the bald eagle there is a small banknote printing machine and a bill on the table. The machine is printing toilet paper into dollars, and the number on the bill gets bigger and bigger – from $2 trillion to $8 trillion.

Citing a vlogger nicknamed “sharp-tongued pumpkin,” the Global Times noted that there is “also an iron hook under the bald eagle’s feet, and two pieces of cotton with blood near its hands on the table, suggesting ‘the US’ capital accumulation was built on racial oppression.'”

The newspaper further noted the vlogger pointed out that “the bald eagle image shows today’s aggressive yet feeble US is trapped in its growing debt crisis and racial conflicts, but still points fingers at China.”

“With regard to China, and competition in the global economy, we will continue to consult on collective approaches to challenging non-market policies and practices which undermine the fair and transparent operation of the global economy,” the G-7 leaders said in a joint communique, according to the network.

“The era of one country or a bloc of countries dictating world affairs is over,” he said. “The U.S. is ill, very ill indeed. We’d like to advise the G-7 to take its pulse and come up with a prescription for the U.S.”

this is really deplorable, mocking others for a pandemic that they started. shame on CCP https://t.co/xzP35n8zmG

This is how nonsense chinese communist party disrespecting #G7, #Hinduism,#Christianity . From these pictures it is clear that what type of humor enjoys the people of China. Meme on Covid Situation is Shameful https://t.co/G6iTfJDTDi

How insensitive and inhumane behaviour #Chinesemedia showed by sharing the cartoon named “The last G7”, mocking the various nations and christianity religion.

In the right most corner, they mocked #India for handling pandemic which was started by #china itself. https://t.co/5oLaclGuLW

CCP propoganda is getting worse! https://t.co/XWHl4V79Up