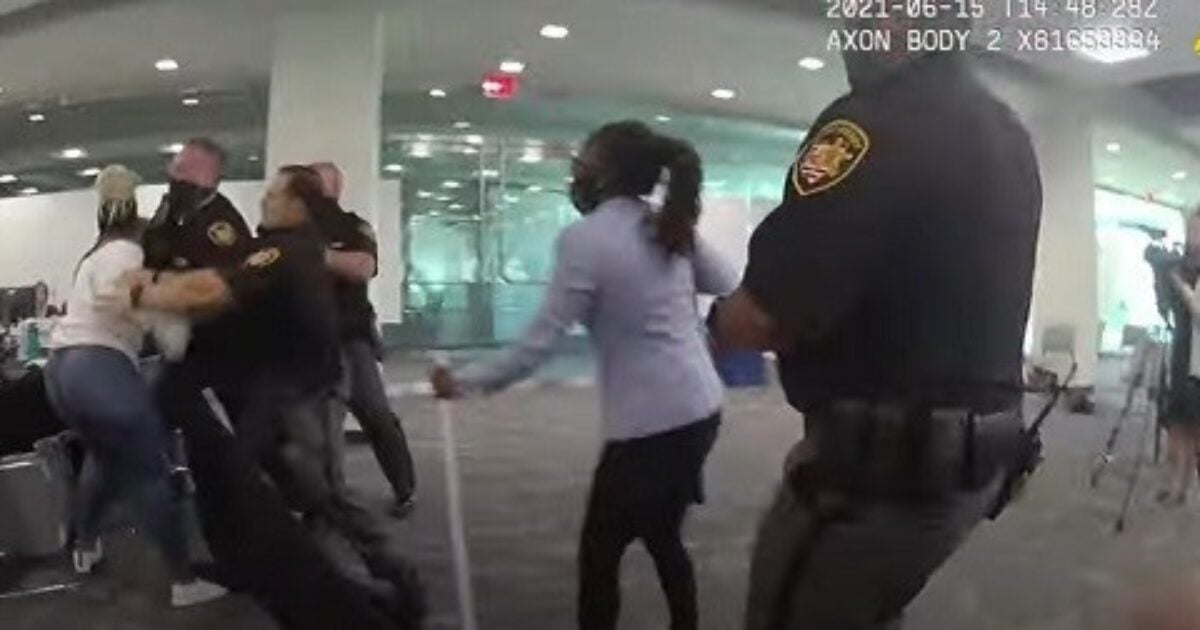 In a dramatic courtroom incident, a woman charged at the brother of Olympic champion Simone Biles just after an Ohio judge dismissed all charges against him in a triple-murder case because of lack of evidence.

Video shows the emotional woman, who is apparently the mother of one of the victims, rushing toward defendant Tevin Biles-Thomas after Cuyahoga County Judge Joan Synenberg’s ruling. Several sheriff’s deputies immediately subdued the woman and restored order after some momentary chaos. As one of the officers cuffed her in the body-cam footage, the sobbing, heartbroken woman can be heard saying that “he killed my baby.”

Authorities had charged U.S. Army soldier Biles-Thomas with murder, voluntary manslaughter, and felonious assault arising from an incident in which three young men were shot and killed in a 2018 New Year Eve party, one of whom was Biles-Thomas’ cousin DeVaughn Gibson, 23.

Biles-Thomas had pleaded not guilty, and his first proceeding last month ended in a mistrial because of a paperwork snafu during jury deliberations.

According to several news accounts, the woman is the mother of DelVaunte Johnson, one of the victims, who was age 19 at the time of the fatal shooting. A county official subsequently indicated that the woman identified as Brandie Johnson, was released with no charges.

The third victim in this tragedy was Toshaun Banks, 21.

Dramatic new body camera video shows the moment a woman — presumably the mother of a victim — rushed at Tevin Biles-Thomas after a judge acquitted him of all charges related to the New Year's Eve triple homicide. Warning: video contains profanity. https://t.co/WYUYDbtY3Y pic.twitter.com/xdKb3YRBqF

There was no positive identification of the gunman in the crime, which undermined the prosecution’s case. Nor was there any physical evidence, such as a weapon. Apparently a key witness who identified Biles-Thomas as the shooter the first time around, and who had benefitted from a plea bargain for alleged evidence tampering, failed to show up to testify in the second trial.

In tossing the case, the judge noted that a witness, who apparently didn’t see the gunman’s face, was only 75 percent certain that the clothes worn by Biles-Thomas as filmed in surveillance video “matched her recollection of what the shooter was wearing.” The Washington Post noted.

That evidence “is insufficient to sustain a conviction,” the somber judge ruled, granting the defense motion to dismiss. “My heart goes out to the families of the victims.”

The surroundings don’t look like a traditional courtroom because the trial was held at Cleveland’s Huntington Convention Center rather than in the courthouse owing to COVID-19 guidelines.

“She lost a son and we understand, and we respect the fact that she has suffered horribly, her family has suffered horribly, just like the other families… Including Mr. Biles. I mean, Mr. Biles’ own cousin was murdered in this case and he had to sit there and stand trial with the accusation that he was responsible, murdered his own cousin, which simply wasn’t true. We get it, she’s angry. She was led to believe Mr. Biles was guilty, when he wasn’t, and she reacted like a mother. We don’t fault her for that,” Patituce said, Cleveland’s Fox 8 reported.

“When the case went to trial last month…prosecutors said Biles-Thomas opened fire on Johnson and Banks when Gibson was accosted at the party. Johnson was said to have returned fire in self-defense, killing Gibson….Patituce…said there was no evidence showing his client fired any shots, and prosecutors were not able to present the gun used to kill Johnson and Banks,” The Post added.

Simone Biles has not, as yet, released a statement about the outcome. She did issue this tweet a few days after her brother’s arrest.