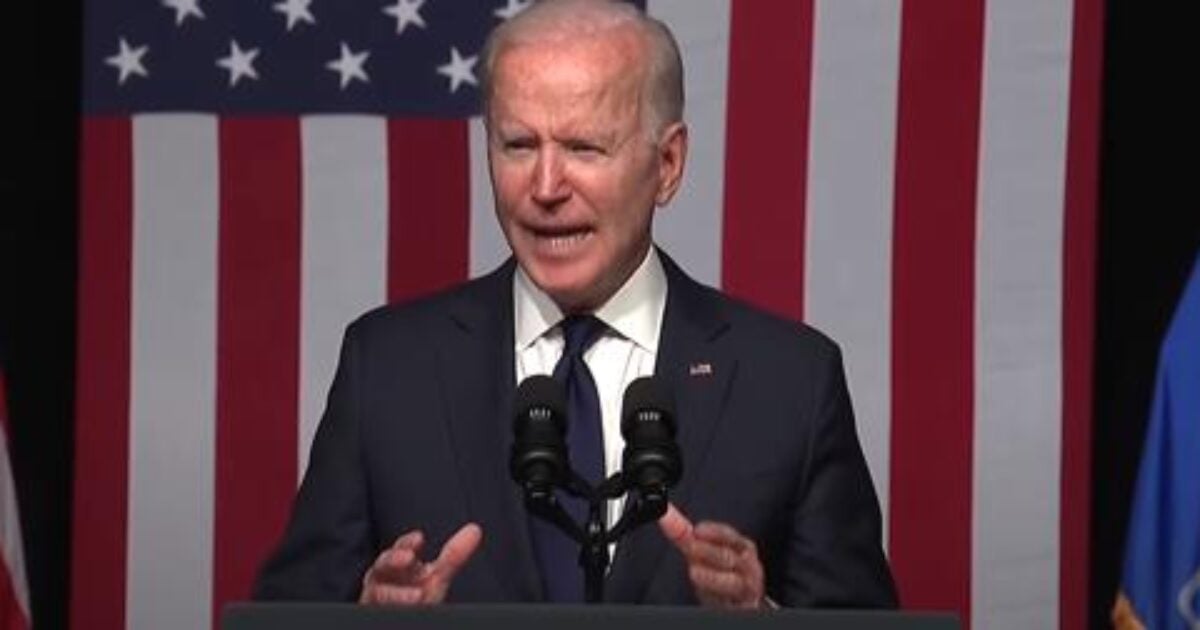 President Joe Biden suggested Tuesday that black entrepreneurs are incapable of succeeding in America because they don’t have access to lawyers and accountants.

He made the bizarre remarks while delivering a speech at the Greenwood Cultural Center in Tulsa, Oklahoma, marking the 100th anniversary of the Tulsa Race Massacre.

Much of the speech centered around the dubious idea that black Americans are somehow being “denied” the ability to succeed in America like everybody else.

“Just imagine if instead of denying millions of Americans the ability to own their own home and build generational wealth, we made it possible for them to buy a home and build equity into that home and provide for their families,” he said at one point.

Slightly later, he dovetailed to the issue of entrepreneurship.

“Just imagine, if instead of denying millions of entrepreneurs the ability to access capital and contracting, we made it possible to take their dreams to the marketplace to create jobs and invest in our communities,” he said.

The remarks drew widespread criticism — except of course from the demonstrably sycophantic press — for sounding awfully racist.

According to the U.S. Census Bureau, black entrepreneurs owned “approximately 124,551 businesses” as of 2019.

According to the National Association of Black Accountants, black men and women accounted for nine percent of all accountants and auditors as of 2019.

And according to the American Bar Association, black men and women accounted for 5 percent of all lawyers as of 2020.

Among these lawyers is Judge Joe Brown, who was among numerous successful black entrepreneurs, accountants and lawyers who responded to the president’s controversial remarks by tearing him to pieces.

I guess he still thinks ‘he knows about negroes’

He can’t open his mouth without putting his foot in it https://t.co/ntpvaCXfLn

WOW that’s racist so we need lawyers and accountants to be successful. According to @JoeBiden I don’t exist since I’m a successful black lawyer entrepreneur. It’s a neat trick having your #s done by someone who doesn’t exist. #CA26 #YouAnitBlack https://t.co/ZPi86jDYpf

What the hell is he talking about? I’m CPA and do plenty of business with black entrepreneurs. He’s delusional!!!

I’m black and I am a lawyer.

I’m disgusted. This man literally thinks NOTHING of us. I have ID, can use a computer (very well) and gasp: have an accountant.

But I’m one of those that “Ain’t black” people either. I did my research on this guy.

Well, I’m a black business owner who has both an attorney and a CPA . WFT is wrong with us ? lol 😂. Democrats still think we are less than a whole capable person. It’s insulting.

I am a Black entrepreneur and I have a lawyer and accountant. My Black cousin has a criminal record and started his own trucking business and he has both, an accountant and a lawyer. He did so well a private equity firm purchased his company! This crap is so bigoted and divisive!

According to a 2019 report from the Congressional Black Caucus Foundation, “African Americans have a long history of entrepreneurship” tracing back to the 1800s.

While the climb upward was certainly made more difficult because of Jim Crow laws, by the 1980s black entrepreneurship began surging and has “continued its upward trajectory ever since,” according to the report.

But as noted by many of Biden’s critics on social media, it seems as if in his mind — and, in fact, the minds of many Democrats — black people are literally inferior beings who’re unable to do anything without the government’s assistance.

Perhaps this attitude exists among them because they’ve personally never hired an attorney or accountant who was black? Or because they personally have never shopped at a business owned by a black man or woman?

If that’s the case, then they may need to step out of their bubble and take a peek at the real world, where, as the white Twitter user below hints at, black entrepreneurs, accountants and lawyers can be found all across the country:

This is hilarious. I’m white and i have a black accountant and lawyer.