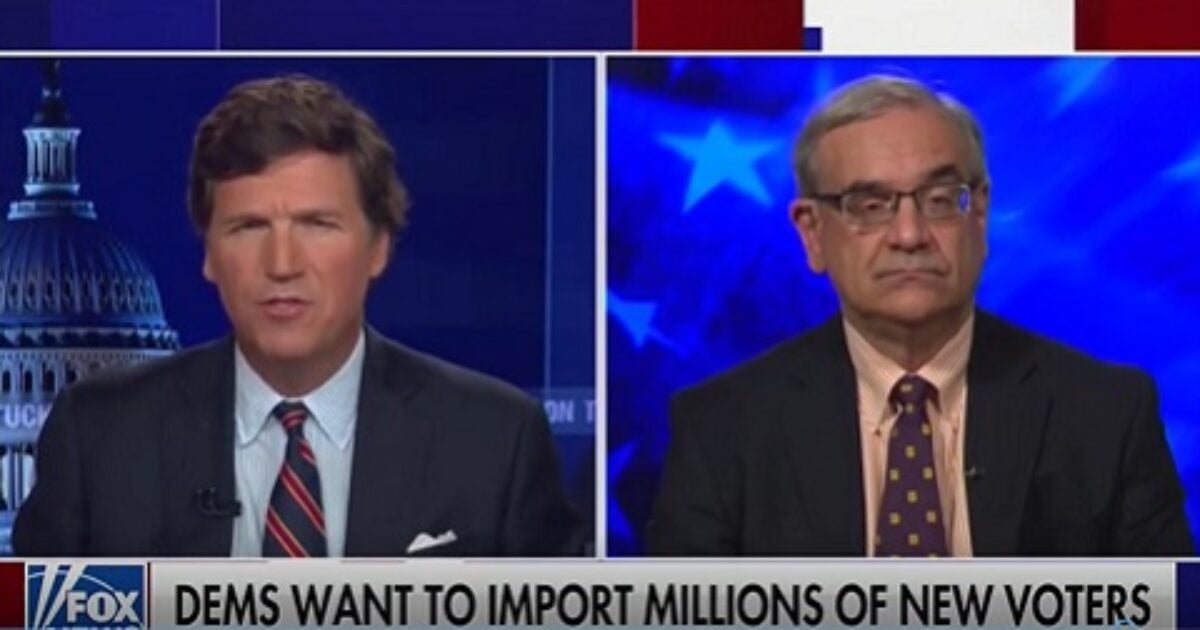 Fox News host Tucker Carlson was sure to draw the ire of the left even more than he typically does with Monday night’s commentary on immigration.

The big secret, at least from the media’s perspective, is that Democrats play the long game, manipulating our immigration system to fundamentally transform America. A quest to render white Anglo-Saxon protestants (and the values they bring with them) a minority in the country.

Of course, to say that out loud results in the left calling you a racist or a nativist. Or worse, a white supremacist.

“They’re trying to change the population of the United States and they hate it when you say that because it’s true,” Carlson said. “But that’s exactly what they’re doing.”

Carlson opened the segment with an emphasis on the Biden administration granting over 100,000 Haitians a form of provisional residency known as temporary protected status.

“Let’s rediscover what we have in common, makes us all Americans and bridge the gap,” he continued. “You don’t want to live in a divided country where people have nothing in common and hate each other. And if you really wanted to do that, the first thing you would do is pause immigration. It has upsides for sure, but also downsides. And the main downside of unrestrained immigration, or any immigration, is that it makes the country more volatile.”

Suggesting the administration is “amping up” the immigration of foreign nationals into the U.S., Carlson then explained that “for reasons that are not clear to anyone,” Haitian nationals “will get amnesty.”

“If you are here illegally from Haiti, you can get a Social Security number and work and can’t be deported,” he said. “What’s the purpose of this? That’s worth asking.”

Mark Krikorian, executive director of the Center for Immigration Studies, explained that the temporary protective status is something in the law that is supposed to allow foreign nationals in the U.S., including illegal immigrants, to remain here temporarily when “some unique exceptional tragic thing happens in their homeland.”

As for Haiti, there was a devastating earthquake in 2010, and Krikorian said, at that time, the U.S. granted temporary protective status.

“What President Biden did over the weekend,” he further explained, “is give all of the Haitian illegal immigrants who came since the earthquake ten-eleven years ago work permits, this amnesty light if you will.”

He said the administration’s justification, economic problems and political instability, had “no relation to the law,”

“That describes half the world, quite frankly,” Krikorian noted, adding that they will “get away with it because there is nobody with any standing to bring a lawsuit to stop it.”

Carlson weighed in to say that, despite its merits, Haiti “has been poor and volatile for 200 years, it’s not a new development.”

“That’s insane,” he continued, before suggesting that Democrats are trying to change the population in the United States.

“You change the population, you change the country,” Carlson would later add. “You make your party stronger, you turn it into a one-party state, and at that point it doesn’t matter what people think. And that is, of course, exactly what they’re trying to do.”