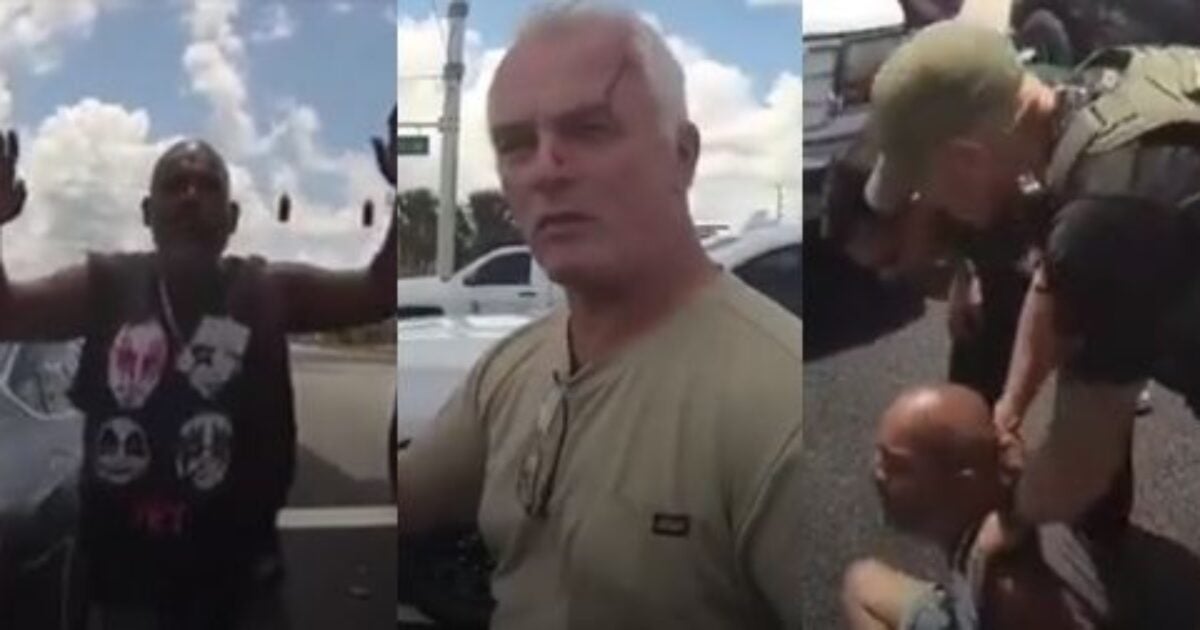 Two good Samaritans stopped to help Deputy Anthony Zimmerer with the Volusia County Sheriff’s Office in Deltona, Florida during a traffic stop this week. One of them got hit and bloodied when the unstable suspect attacked during the encounter.

The deputy stopped a black Ford F-150 pickup truck after it cut across all lanes of traffic and nearly struck him as well. The officer’s bodycam recorded most of the altercation as it happened.

The suspect is Frank Padilla Velez, 41. He began acting very strangely, shouting and ranting incomprehensively when he was approached by Zimmerer who tried to speak with him before arresting him. In the video posted by the Sheriff’s Office, the deputy asked the man leaving the front seat of his truck what he was doing.

The deputy told the man to calm down as he wandered around in the street in the middle of a lane: “Calm down. What is going on?” Zimmerer asked him. That’s when the suspect started to go off the rails.

The deputy proceeded to attempt to handcuff the man and was allegedly hit in the head by the suspect’s elbow as they struggled and fought. The handcuffs were reportedly knocked into the middle of the road.

Two men saw what was happening and jumped out of their cars to give the deputy a hand with Velez. During the ensuing struggle, the deputy’s bodycam temporarily cut out but the sheriff’s office reported that Velez was thrashing on the ground and then allegedly tried to bite the deputy’s leg. The officer reportedly used a taser on the suspect but it had no effect.

Footage also shows the two witnesses helped hold Velez down while he was cuffed. One of the men who helped the deputy had a bloody cut on his forehead but insisted he was okay. Additional bodycam footage from deputies that arrived on the scene following the confrontation show Velez restrained on the ground. He kept insisting someone was going to hurt or kill him. He also kept screaming for help. The suspect was apparently not harmed.

“You hit me, buddy. You hit me,” the man with the gash informed Velez.

One of the good Samaritans also got a hold of Velez’s dog, which tried to protect the suspect. He reportedly put the dog back in the truck unharmed.

Sheriff Mike Chitwood announced that the two gentlemen who assisted Zimmerer will receive citizen’s awards in recognition of their selfless actions.

“All my respect and gratitude goes out to these two men who took action when they saw a deputy under attack,” Chitwood declared in a statement. “It makes me proud to know that in Volusia County, our residents still have our deputies’ backs.”

“Padilla was charged with resisting an officer with violence, battery on a law enforcement officer, driving with a suspended license, careless driving, and expired registration,” the sheriff’s office stated.

The good Samaritans and the deputy were applauded on social media:

We need more people with a spine!

This is the America I know. Not the one where people sit back and watch/film

That’s what I like to see. We are in this together. The bad rap on law enforcement should of been acknowpledged as all races not just against one race for one race to get acknowledged as the victims. Shame on BLM Activists who put the people of this county in danger.