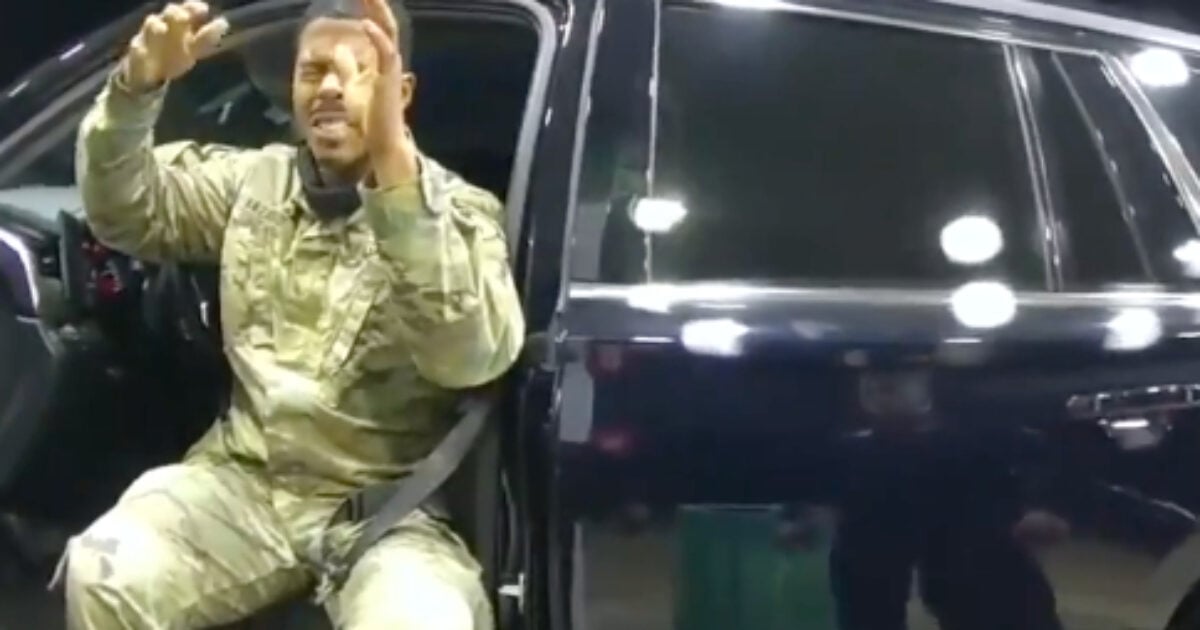 One of two Virginia police officers has been fired following a use-of-force incident involving a black U.S. Army officer during a recent traffic stop.

According to reports, the two Windsor, Va., officers, Joe Gutierrez and Daniel Crocker, pepper-sprayed and pointed their service weapons at Army Second Lt. Caron Nazario, who is black and Latino, during a December 2020 encounter after officers said they considered him a “high-risk traffic stop.”

The firing came within hours of a call from Democratic Gov. Ralph Northam for an independent probe of the incident, the Associated Press reported.

Video of the incident posted online shows officers interacting with Nazario after it appears he has been sprayed. One officer loudly orders him to the ground after appearing to suggest that the use of force would not have been necessary had the Army officer been more cooperative.

Every minute of this exchange between the officers & Lt. Nazario is awful to watch. It’s a shameful example of abuse of power and no expected accountability — and it’s predicated on the racism that makes this Black Army officer afraid to exit his car. 1/4 pic.twitter.com/LT65kqxnH4

As Nazario unbuckles his seat belt, he repeatedly asks the officers if their commander “is available” as one of them continues to order him to the ground. Nazario refuses, however, and continues to press officers about why he’s been stopped.

“Get on the ground now!” an officer screams, as both of them appear to physically take Nazario down.

“Can you please talk to me about what’s going on,” the Army officer says repeatedly while refusing to comply with police orders.

“Why am I being treated like this?” He asks.

“Because you’re not cooperating,” an officer responds. “Get on the ground!”

In a statement, the town of Windsor said that it is joining calls from elected officials including Northam for a special investigation by the Virginia State Police over the use of force, the drawing of weapons, and an alleged use of a slang term to suggest he could be executed.

Nazario has since filed suit against Gutierrez and Crocker, with both sides disputing what happened.

In a post-arrest report, Crocker wrote that officers believed Nazario was “eluding police” and that he considered the encounter a “high-risk traffic stop.” Meanwhile, Nazario’s attorney, Jonathan Arthur, told the AP his client was not trying to elude officers but rather he wanted to stop somewhere with a lot of lighting.

According to Windsor officials, the police department opened an internal probe regarding the use of force and decided that proper policy was not followed. The officials said disciplinary action followed the investigation, adding that Gutierrez has been terminated.

“The Town of Windsor prides itself in its small-town charm and the community-wide respect of its Police Department,” says a statement issued by the city, according to the AP.

“Due to this, we are saddened for events like this to cast our community in a negative light. Rather than deflect criticism, we have addressed these matters with our personnel administratively, we are reaching out to community stakeholders to engage in dialogue, and commit ourselves to additional discussions in the future,” the statement continued.

Northam himself called the incident “disturbing” in a tweet on Sunday.

“Our Commonwealth has done important work on police reform, but we must keep working to ensure that Virginians are safe during interactions with police…" pic.twitter.com/g7uMotJUJE

“Our Commonwealth has done important work on police reform, but we must keep working to ensure Virginians are safe during interactions with police, the enforcement of laws is fair and equitable, and people are held accountable,” he noted in a statement, adding he invited Nazario to meet with him.