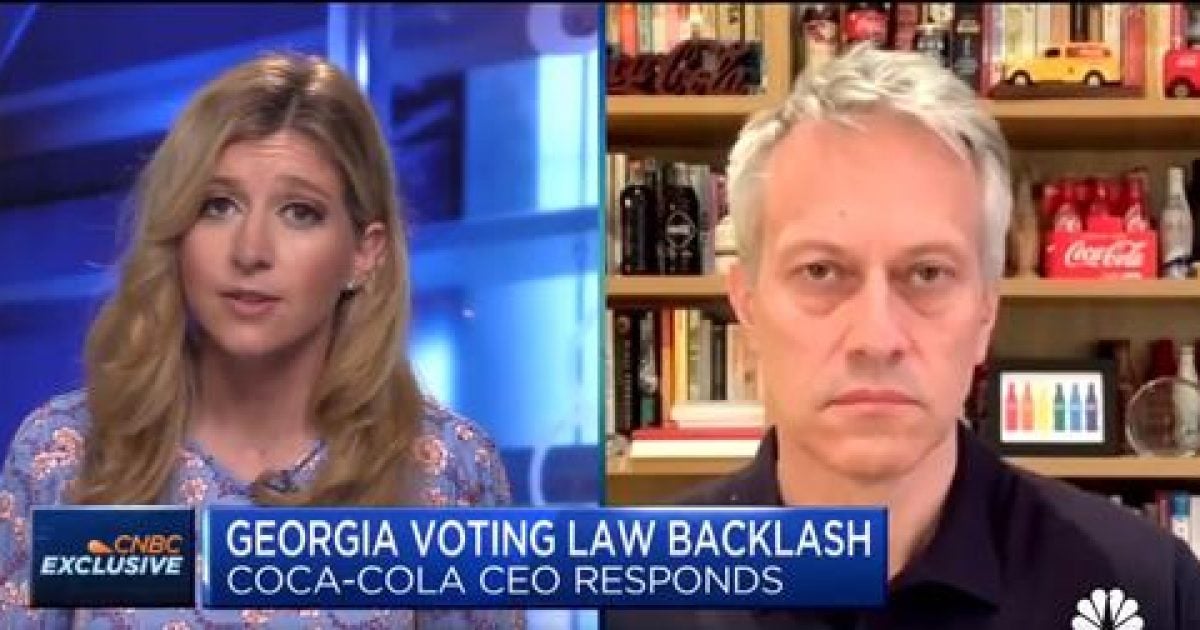 The Coca-Cola Company, which last made headlines when it was busted two months ago for exposing its white employees to critical race theory propaganda, is back in the headlines thanks to its decision to involve itself in “woke” politics.

Last Thursday, Georgia Gov. Brian Kemp signed into law a sweeping voting reform bill designed to enhance election security and integrity by instituting common-sense rules such as a requirement that voters display their ID to vote.

In response, Democrats and their media allies began screeching about “voter suppression” and “Jim Crow,” with even President Joe Biden joining the chorus. Moreover, left-wing activists began pressuring corporations such as Cola-Cola, among others, to issue statements condemning Georgia for its new law.

While it took a couple days, Coca-Cola eventually responded, first with a statement Monday from Alfredo Rivera, the president of the company’s North American branch, expressing how “disappointed” the company felt over the law in Georgia.

Two days later, Coca-Cola CEO James Quincey appeared on CNBC for an interview but was ruthlessly harangued over why it’d taken so long — four days, to be exact — for the company to speak out against the Republican-backed law in Georgia.

“The reality is many things are improved and done and achieved in private, without having to take a public stance, but in this case it does not work, clearly. And so, we’re being more forceful in our public position even more than we were earlier this week, and we’ll continue to advocate for change in Georgia,” he defensively said.

Quincey also says “this legislation is wrong, and needs to be remedied, and we will continue to advocate for it both in private and in now even more clearly in public” pic.twitter.com/cdruteEiat

Now fast-forward to Thursday, when Quincey followed up on the interview by publishing a statement in which he repeated Rivera’s claim about the company being “disappointed” but vowed to support “federal legislation” currently on the books that ostensibly “protects voting access and addresses voter suppression.”

The “federal legislation” he was likely referencing was H.R. 1, a radical bill that would nationalize America’s elections, thus stripping states of the election-management powers granted to them by the Constitution.

In a piece written for Fox News two months ago, Florida freshman Rep. Byron Donalds, a Republican, warned that H.R. 1 was “Democrats’ latest attempt to disregard the Constitution in their ruthless power grab in the form of ‘election reform.’”

“Election law, like most laws, cannot be solved by imposing one-size-fits-all policies. Since entering Congress less than two months ago, I have witnessed first-hand D.C. politicians’ disingenuous efforts to package lousy policy under the guise of flashy slogans and hashtags that ring hollow.”

But congressional Republicans aren’t the only ones who’ve sounded the alarm on H.R. 1. So have the editorial boards of National Review and The Wall Street Journal.

Over at National Review, the editors described it as “a partisan assault on American democracy.” And over at the Journal, the editors said it’s designed “to rig the rules to their advantage.”

What’s ironic is that these are the same accusations that have been leveled against the bill signed into law by Kemp. The only difference is that H.R. 1 appears to actually fit these descriptions, whereas the Georgia law does not.

For instance, whereas the Georgia law requires voter IDs — something preferred by a majority of voters, because it genuinely enhances election security — H.R. 1 bans voter ID laws, thus opening the door for election fraud.

Every single American should be OUTRAGED by this:

Which bill seems more like a “partisan assault” designed to “rig the rules?”

By lending its support to H.R. 1, the Coca-Cola Company has essentially come out in favor of banning voter ID laws. There’s just one problem.

Prior to the coronavirus pandemic erupting across the states, the company had planned for its 2020 annual meeting to occur in-person on Feb. 24th. More importantly, it had required attendees to first prove their identity before being allowed to enter.

“At the entrance to the meeting, we will verify your registration and request to see your admission ticket and a valid form of photo identification, such as a driver’s license or passport,” a page on Coca-Cola’s investment portal reads.

It appears that Coca-Cola therefore believes that it’s OK for it to demand people identify themselves but not OK for governments to do the same.

The original page may be accessed here and an archived copy here.

Now ask yourself why Democrats and their allies, including Coca-Cola, are against voter ID laws. According to them, these laws are bad because they’re an attempt by Republicans to prevent black people from voting.

Yet if that logic is valid, then what does it say about Coca-Cola’s ID rule, hmm?