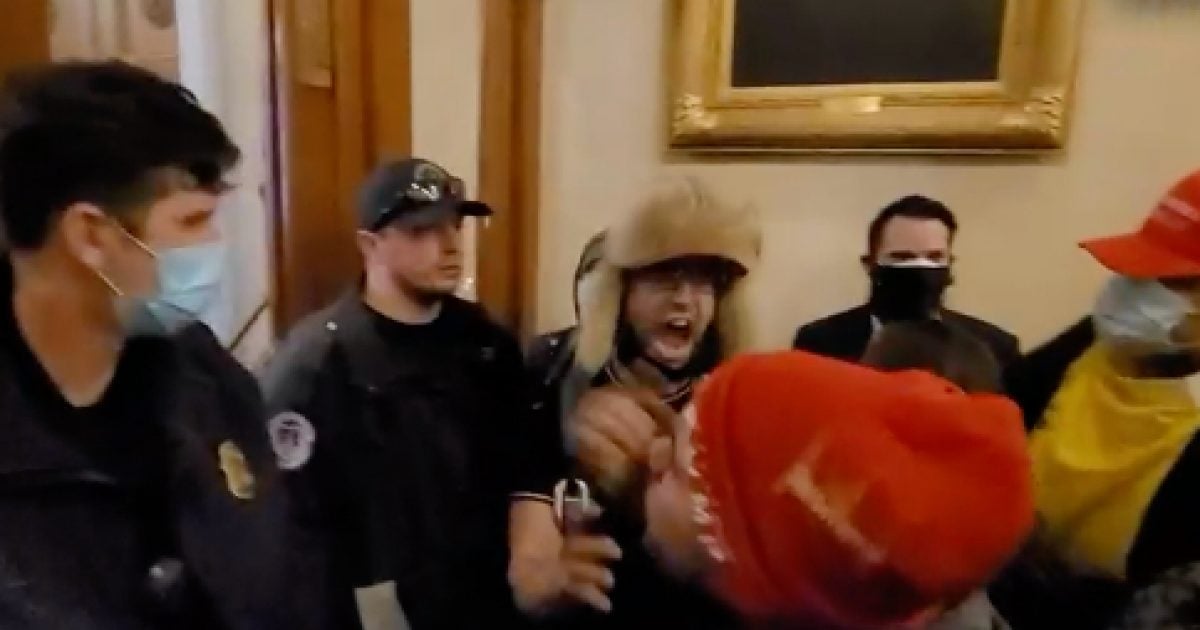 Video obtained by the Washington Post shows the harrowing, highly volatile moments before an Air Force veteran and supporter of President Donald Trump was shot by a Capitol Police officer.

Earlier reports noted that the victim, Ashli Babbitt of San Diego, stormed into the U.S. Capitol Building with several hundred other supporters of the president on Wednesday following a “Stop the Steal” rally where Trump spoke.

Previously published video showed the moment she was shot and the ensuing chaos afterward as bystanders and Capitol Police attempted to staunch a bleeding wound and evacuate her from the building.

But video obtained by the paper shows the critical minutes before she was shot, providing more context — and, many may conclude — justification for the officer’s action.

Clips show Babbitt and several others angrily denouncing three Capitol Police Officers who were standing between them and a doorway into the sensitive Speaker’s Lobby, one of the more secure areas of the building, which is just feet away from the House chamber.

As the crowd encroached on the officers, one clip showed lawmakers on the other side of barricaded doors behind them being evacuated from the chamber a few yards away. A spokesperson confirmed to the Post that Rep. James McGovern (D-Mass.), chairman of the House Rules Committee, was present at the time.

One rioter can then be seen punching each of the locked doors, breaking their windows, as others demanded that the officers get out of the way. Someone in the background can be heard chanting, “Break it down! Break it down!”

“We don’t want to hurt no one, we just want to go inside,” one rioter told the officers guarding the doorway.

In another clip, Babbitt can be seen agitating with the officers and yelling at them, though what she said is not clear.

John Sullivan, a controversial left-wing activist who frequently takes video at protests and who took the footage Wednesday, can be heard telling one officer that more rioters are likely on their way and that he and the others should leave.

“We want you to go home. I’m recording. And there’s so many people. They’re gonna push their way up here. Bro, I’ve seen people out there get hurt. I don’t want to see you get hurt,” he says.

Another protester who was wearing a Trump hat told officers, “We backed you guys in the summer. When the whole country hated you, we had your back.”

Officers stood their ground for several more moments but eventually moved away as other Capitol Police in tactical gear arrived on the scene behind the rioters. One can be heard telling the others, “They’re ready to roll.”

No sooner than they moved aside, rioters rushed at the doors and attempted to break through. The officers in tactical gear who were armed with rifles then began trying to evacuate their three colleagues.

At one point shortly before Babbitt was hit, someone yelled several times that officers on the other side of the door were drawing their weapons.

With assistance from someone who helped hoist her, Babbitt made an attempt to get through one of the doors after the glass had been completely broken out. But an officer in a suit wearing a surgical mask immediately fired at Babbitt, striking her in the neck.

She immediately fell backward onto the floor and was surrounded by other rioters.

The tactical officers made their way to Babbitt and began to administer first aid while other rioters yelled to their cohorts to clear the area.

Babbitt’s ex-husband Timothy McEntee told the Post that he owned a pool-cleaning business in San Diego.

“She’s a small business owner in California and felt (much like others) that she was being wronged,” he told the Post.