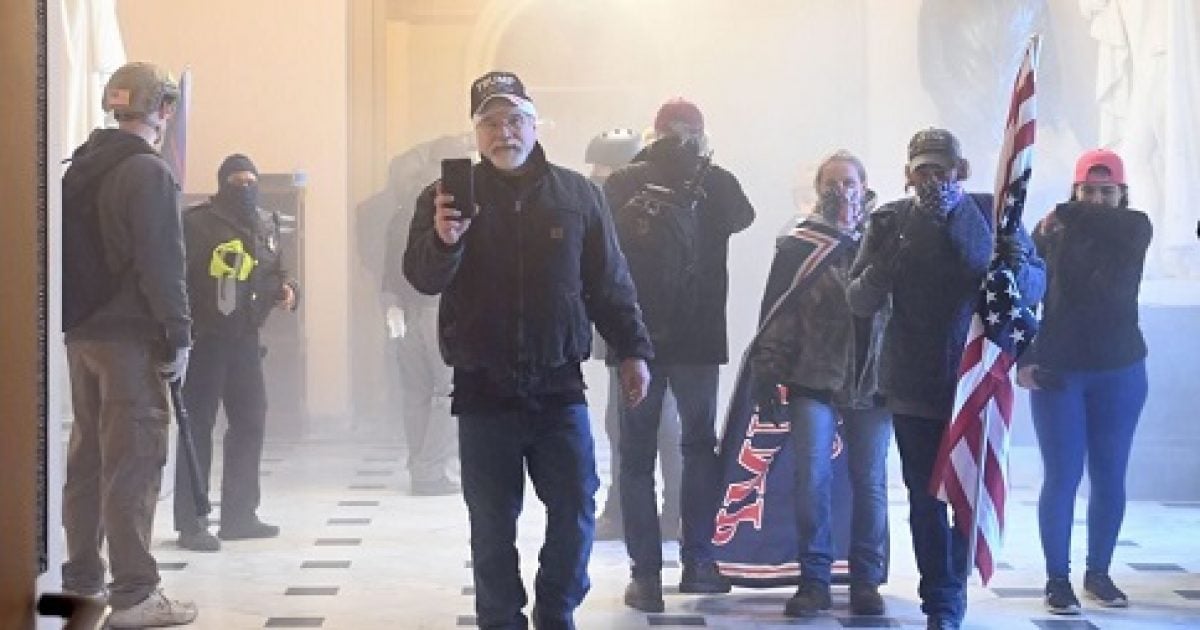 Amid claims of Antifa instigators skilled in inciting crowds being responsible for much of the mayhem seen Wednesday in Washington, the CEO of a marketing firm outside Chicago is a living breathing testament to the effectiveness of such a tactic.

Bradley Rukstales, the head of Cogensia, was arrested after following hundreds of protesters storming the building and said in a later statement that moment was the “single worst decision” of his life.

What may have begun with nonlethal intentions resulted in the death of a female Trump supporter, Ashli Babbitt, an unarmed 14-year veteran of the Air Force shot and killed by a Capitol Police officer, and the death of another Capitol Police officer — the officer was “injured while physically engaging with protesters” and later succumbed to his injuries at a local hospital.

“In a moment of extremely poor judgment following the Jan. 6 rally in Washington, I followed hundreds of others through an open set of doors to the Capitol building to see what was taking place inside,” Rukstales said in the release, according to WBEZ.

A tattoo artist from Roselle and a CEO from Inverness were arrested in D.C. after a mob of Trump supporters violently stormed the Capitol. https://t.co/wmackmpYHu

“My decision to enter the Capitol was wrong, and I am deeply regretful to have done so,” the Trump campaign contributor added. “Without qualification and as a peaceful and law-abiding citizen, I condemn the violence and destruction that took place in Washington.”

Rukstales offered an apology, but will soon learn that the left is not discouraged by contrition.

“I offer my sincere apologies for my indiscretion,” he said. “And I deeply regret that my actions have brought embarrassment to my family, colleagues, friends and fellow countrymen.”

“It was the single worst personal decision of my life; I have no excuse for my actions and wish that I could take them back,” Rukstales added.

A spokeswoman for Cogensia said Rukstales was put on a leave of absence pending an investigation.

The spokeswoman told WBEZ that at the time of the arrest, “Brad was acting as an individual, not as CEO of Cogensia.” She also said the company is taking the matter “very seriously.”

David Fitzgerald, 48, a self-employed tattoo artist from the Chicago area, was also arrested in Washington on Wednesday, the NPR radio station noted, charged with unlawful entry on federal grounds and breaking curfew near the Capitol.

And while Rukstales was contrite, Jenny Cudd, of Midland, Texas, was far from it.

Posting a 25-minute video on Facebook, Cudd said she and others decided to “storm the Capitol” after learning that Vice President Mike Pence “betrayed us.”

“I want to let you know what actually happened today,” Cudd said. “He had way more power and he wasn’t willing to exercise it.”

“We didn’t vandalize anything but we did, as I say that, we did break down Nancy Pelosi’s office door and someone stole her gavel and took a picture sitting in the chair flipping off the camera, and that was on Fox News,” she would add, with a laugh.

Meet Jenny Cudd from Midland Texas “WE did break down @SpeakerPelosi‘s office door and somebody stole her gavel and I took a picture sitting in the chair flipping off the camera and that was on Fox News” @FBI pic.twitter.com/3s3aWgOJ9G

While Cudd will soon learn that government holds a much more powerful hand, she said people are “pissed off,” having lost all faith in the integrity of our elections.

Cudd, who ran for mayor of Midland in 2019, gaining over 15% of the vote, said the protesters were a “bunch of red-blooded American patriots that actually give a s–t about our country and keeping it.”

Identified by One America News Network as a prominent member of Insurrection USA, which the network said is reportedly aligned with Black Lives Matter, Sullivan was among the protesters who stormed the Capitol on Wednesday — he apparently admitted to being inside the Capitol, but claimed he was only “reporting” on events.

Because ANTIFA was only there to document! Honest! https://t.co/voBmviQ1kK

Some in the media identified Sullivan as a “left-wing activist,” and he was apparently on the scene when Babbitt was shot and killed, reportedly capturing the woman lying in a pool of blood on video.

“I remember looking into her eyes and seeing the lifelessness and understanding that she was dead,” he said.

He was also featured on CNN, though no one seemed curious about why a Black Lives Matter affiliated activist was among alleged Trump supporters.

Sullivan was arrested during BLM riots in Salt Lake City last year, OAN reported. He was charged with felony rioting, criminal mischief and threats of violence.

He is seen in the video below saying “we’re about to burn this sh*t down,” as he urged a crowd to chant, “It’s time for a revolution!”

Meet BLM criminal John Sullivan was arrested for threats and violence against conservatives in Utah!

John was interviewed on CNN about the film he took inside the CAPITOL of Ashli Babbit lying in a pool of blood dying – WHY was he there?

Two known Antifa members were also spotted amid the Capitol breach, according to the New York Post. They were reportedly sporting MAGA gear and had been identified in videos of demonstrations in New York City, a source told the Post.