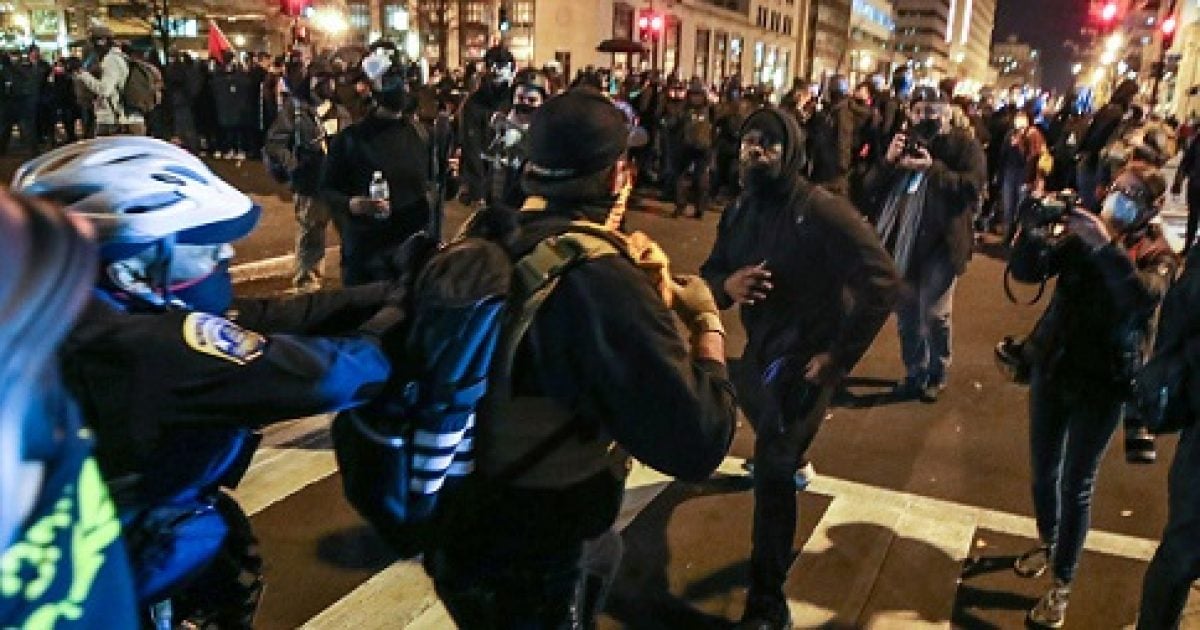 Thousands of supporters of President Donald Trump marched on Washington, D.C., on Saturday to hold rallies and back his legal challenges to the 2020 election, and it wasn’t only a matter of time before chaos ensued.

Antifa and black-bloc thugs turned out to attack Trump supporters and there were violent clashes with members of the group Proud Boys, resulting in stabbings and a number of police officers being injured.

Trump, who would fly over the crowd in Marine One on his way to attend the annual Army-Navy college football game, took notice of the “Stop the Steal” rallies.

“Wow! Thousands of people forming in Washington (D.C.) for Stop the Steal. Didn’t know about this, but I’ll be seeing them! #MAGA,” the president tweeted earlier in the day.

Wow! Thousands of people forming in Washington (D.C.) for Stop the Steal. Didn’t know about this, but I’ll be seeing them! #MAGA

He would also share on Twitter a video of the throngs rallying peacefully — when the numbers were in their favor.

But that was before their ranks dwindled and Antifa and other anti-Trump elements reared their ugly heads.

After months and months of Antifa domestic terrorists creating mayhem across the country, it would be an understatement to say Proud Boy members were spoiling for a fight.

People in the crowd are chanting “fuck Antifa” as this event prepares to kick off: pic.twitter.com/iq8iohDQuQ

As they have a habit of doing, Antifa and Black Lives Matter supporters set upon isolated Trump supporters, often women and elderly participants.

In the clip below, a man and woman are seen being attacked from behind — another common tactic from the left:

The Proud Boys presented an ill-advised counter to the violent left, not that they were any less confrontational.

At one point, this element burned a Black Lives Matter banner in the street.

The Proud Boys and Trump supporters burn the BLM banner while chanting and cheering in downtown DC: pic.twitter.com/L16azBBhbr

They would attempt to march on Black Lives Matter Plaza throughout the day and evening, only to be blocked by police.

Antifa and BLM activists were gathered at the plaza.

There are several lines of police. Some of the lines are pushing people inside BLM Plaza further back while others are holding strong to prevent the Proud Boys from entering: pic.twitter.com/MjjV1lsrw0

Proud Boys and a few Trump supporters are marching around the perimeter of BLM Plaza, looking for a way in.

Some are clearly angry at police for blocking the area off. You can see one person harassing officers over the blockade: pic.twitter.com/IRjgw27eSg

Police had their hands full as clashes and brawls erupted in the street throughout the night.

Standoffs and fights between police and protesters as officers continue to try and keep opposing groups separated this evening in DC: pic.twitter.com/3U2vW1WIFG

All out brawls in downtown DC between black bloc protesters and Proud Boys right now: pic.twitter.com/ObPlnScI0W

Officers used pepper spray frequently as a means of controlling the unruly mobs.

a proud boy is pepper sprayed as #antifa is being sectioned off by police. #MarchForTrump #BlackLivesMatter pic.twitter.com/P2Ur0bL74G

There were a number of stabbings reported, taking place near a bar where the Proud Boys were gathering.

A member of the #ProudBoys is stabbed during violent running street fights in #WashingtonDC tonight #DC #DCProtests @SWNS pic.twitter.com/uT4oiuSHai

A #stabbing just took place by a #antifa member pic.twitter.com/3kvi3nCBAA

A video was shared online of a man holding a large knife being attacked by Proud Boys members — he was identified in the tweet as an “Antifa militant.”

Cops just watching as Proud Boys beat the hell out of an Antifa militant who was stabbing Trump supporters. https://t.co/3fXSZcXptW

Going out on a limb here, but the bitch in a mask stabbing people is probably the bad guy. pic.twitter.com/mSpdWas9hZ

There were multiple arrests, to include assaults’ on police officers, and a number of injuries.

At least two police offivers were taken to the hospital with injuries, according to Fox 5 DC:

Here are other videos of the chaos that ensued throughout the day from Twitter:

Proud Boys are marching on BLM Plaza…They’ve been met with a lot of cops and are walking down the sidewalk, next to the plaza pic.twitter.com/KWbQHQa7XQ

Another fight breaks out between Proud Boys and Antifa in D.C.

Police move in and pepper spray everyone. pic.twitter.com/B8SOvOXE8Y

D.C. police are trying to keep the Proud Boys and Antifa separate to prevent fighting. pic.twitter.com/V7d3qnwiIb

D.C. police bull rush the antifa group after separating them from the Proud Boys. pic.twitter.com/ME0mLT87S5

@DCPoliceDept assisted an injured female officer as she limped her way outside of the counter-protest zone as civil unrest broke out in DC Saturday following a day of pro-@realDonaldTrump rallies.

The officer appeared to have tears in her eyes.