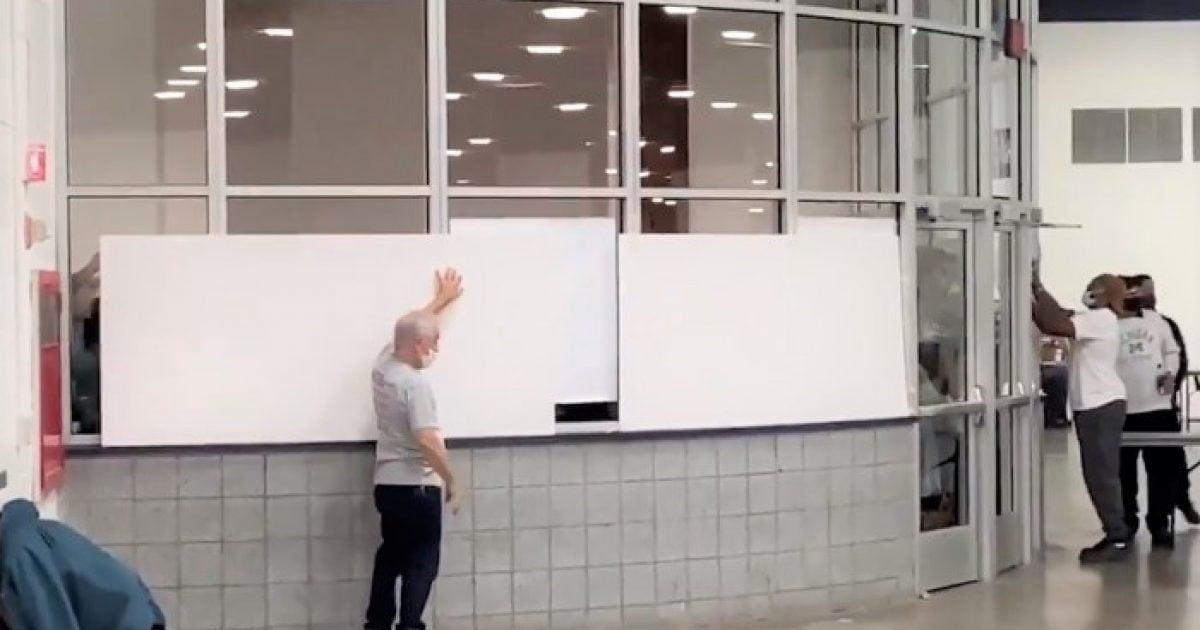 Election officials in Democrat-controlled Michigan, covered up the windows at an absentee ballot-counting center in Detroit, fueling accusations of voter fraud and corruption.  Hours later, Democrat Joe Biden was declared the winner of Michigan—a battleground state that President Trump won in 2016.

On Wednesday, officials tried to block Republican poll challengers (these are election observers put in place to ensure there’s no cheating) from reentering the vote-counting center, claiming it was overcapacity.  The Republicans said there were more Democrat poll challengers than Republicans in the room where votes were being counted.

Finn reported:  “The scene at Detroit’s absentee ballot counting center is growing more heated. The windows now being covered up. Allegations of violations.”

Finn added: “Some of the windows remain blocked off. I asked a few people who taped them up why, no clear answer. A few poll challengers/workers tell us they feel there wasn’t a fair number of Republicans and Democrats in this room. Secretary of State’s office gave us this response:

Some of the windows remain blocked off. I asked a few people who taped them up and why, no clear answer. A few poll challengers / workers tell us they feel there wasn’t a fair number of repubs and dems in this room. Sec of State’s office gave us this response: pic.twitter.com/un1RyFTUJj

A rep for Michigan’s Democrat Secretary of State Jocelyn Benson, did not directly respond to Finn’s question, but merely said the Republican election observers could file a complaint with her office. That’s similar to how customer service reps bum-rush you off the phone if they don’t want to help you.

Drew Thompson, the director of the Michigan Trump Victory group, tweeted:  “Detroit election officials are currently refusing to let the public observe the counting process at the TCF Center. They have padlocked the doors. This is a disgrace to the democratic process.”

Detroit election officials are currently refusing to let the public observe the counting process at the TCF center.

They have padlocked the doors.

This is a disgrace to the democratic process. pic.twitter.com/usZckeVjdu

Thompson also shared a chilling video from outside the vote-counting center.

He tweeted: “The crowd is now chanting “Let us in!” as many Republican poll challengers are still locked outside.”

In a statement, Trump campaign manager Bill Stepien said:  “President Trump’s campaign has not been provided with meaningful access to numerous counting locations to observe the opening of ballots and the counting process, as guaranteed by Michigan law.  We have filed suit today in the Michigan Court of Claims to halt counting until meaningful access has been granted. We also demand to review those ballots which were opened and counted while we did not have meaningful access.”

The integrity of this year’s presidential election has been called into question amid a number of shocking irregularities in the voting and vote-counting process.

The shocking decision to stop counting votes on Election Night—which has never happened before in a U.S. presidential race—fueled outrage among Trump supporters, who claim the counting stopped because Trump was beating Biden in battleground states Pennsylvania, Georgia, North Carolina, and Michigan.

The next day, several troves of mail-in ballots turned up in key battleground states — and some of them reportedly had a suspicious 100% of the votes going to Biden.

Actor James Woods observed: “Good thing the poll workers aren’t demonstrating any visible bias toward a candidate in a polling place, because that is a crime.”

In Arizona, former CIA officer Bryan Dean Wright, says his vote for Trump was not counted. A number of other Arizona Trump voters have made this same claim.

My vote here in AZ hasn’t been counted.

As you can see, three batches of early votes haven’t been processed, including 602 votes in batch V4.

One of those votes is mine.

And it’s for Donald Trump. pic.twitter.com/JR661sl9Sw

A Twitter user posted an alarming number of tweets, suggesting that dead people had voted for Biden in Michigan.

How long has this been going on?

ANOTHER ANOTHER ONE: Apparently Donna Brydges (born in 1901) voted via absentee ballot in Mason County, Michigan. That would make her 119 years old!

Another video appears to show a vote-counter throwing out a ballot after looking at it in disgust.

What is going on here? #Election2020 #ATL pic.twitter.com/NJi3xmInPT

“Separate them from standard letter mail so they can hand stamp them with YESTERDAY'S DATE & put them through"#MailFraud pic.twitter.com/n7AcNwpq80