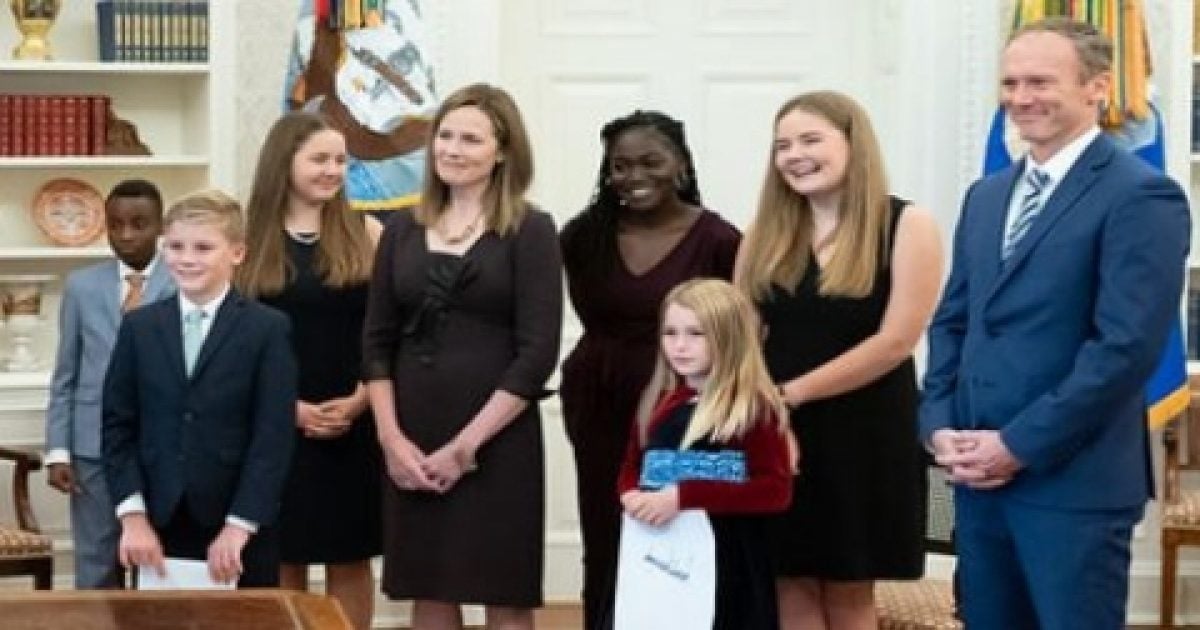 The New York Times stooped to another new low in a recent profile of Supreme Court nominee Amy Coney Barrett and her adopted children.

The liberal newspaper was slammed for its decision to focus in detail on Barrett’s adoptions of two of her children from Haiti, claiming it is “hard to totally separate” her family and the young children from the political process of her nomination.

“Judge Barrett has talked about their adoptions regularly in public speeches. She was inspired to adopt, she once explained, because ‘there are so many children in need,'” the Times piece written by Catherine Porter and Serge F. Kovaleski stated.

“Just as everything with her nomination, the adoptions have been hard to totally separate from the politics of the moment,” the article continued as it jumped on the smears by the left against President Trump’s nominee who has proven herself more than qualified for the job during last week’s confirmation hearings before the Senate Judiciary Committee.

“Judge Barrett has talked about their adoptions regularly in public speeches. She was inspired to adopt, she once explained, because ‘there are so many children in need,'” the piece went on a it focused on the adoption agency Barret and her husband used as well as including quotes from other families asking “to hear how the kids are.”

“Advocates hope the Barretts’ story will encourage other prospective parents to come forward. Detractors have criticized as ‘white saviorism’ the judge’s public accounts of her children’s dire situations before they left Haiti,” the Times article claimed.

Giving the outrageous “white saviorism” critique this “some people are saying” treatment is nuts.

“No impropriety in the Barrett’s adoption of their son but here’s a few people we found to say terrible things about them, the orphanage, and the agency for your consideration.” pic.twitter.com/lIsogqludV

And in its journalistic pursuit of truth, the Times further added that the adoption agency, A New Arrival Inc. “was decertified in 2017 by an accreditation agency used by the U.S. State Department.”

“That same year, it ceased operations, according to tax records,” the report stated, as if the agency’s demise was a refection on Barrett.

The “deep dive” into Barrett’s family and the adoption of her children was slammed on Twitter.

“Nobody assigned to examine whether Biden’s kid sold access to the VP but we’ve got a full colonoscopy of adopted children,” Josh Holmes, former chief of staff and campaign manager for Senate Majority Leader Mitch McConnell, tweeted in response to a comment by National Republican Senatorial Committee adviser Matt Whitlock.

Nobody assigned to examine whether Biden’s kid sold access to the VP but we’ve got a full colonoscopy of adopted children. https://t.co/gKvXZg89ed

“This should be unacceptable,” on Twitter user declared. “They’re attempting to find dirt on Barrett’s children, presumably to question the legitimacy of the adoptions, because they don’t like her politics or her judicial philosophy.”

I’ll never be a on SCOTUS, which is fine, because I don’t have even 1% of the patience ACB had dealing w/ that circus. I wouldn’t have ANY patience with them going after my kids.

Nothing in the history of the left’s behavior that says it won’t do this to average gals like me.

Others on Twitter noted how The New York Times blatantly stepped in to push the left’s agenda, ignoring the scandal surrounding Democratic presidential nominee Joe Biden and his son Hunter.

The Senate Dems couldn’t find anything to torpedo her nomination so the NYT is going to pinch hit for them, by ressurecting the left’s initial attempts to make her adoptions look shady and racist and indecent.

They look into this, but not Hunter’s emails. Got it.

The New York Times has sunk to tabloid fodder at this point. Criticizing Amy Coney Barrett for adopting two beautiful children from Haiti years ago is just unbelievable.

Gotta admire the media’s willingness to jettison their entire industry in an effort to carry Biden across the finish line though.

nO oNe iS aTTaCkInG hEr fAMiLY https://t.co/ZTYLLpjm1i

“It’s hard to separate these two things that are separate, because I oppose this nomination”

“The adoptions have been hard to totally separate from the politics of the moment.”

Only if you’re an asshole.