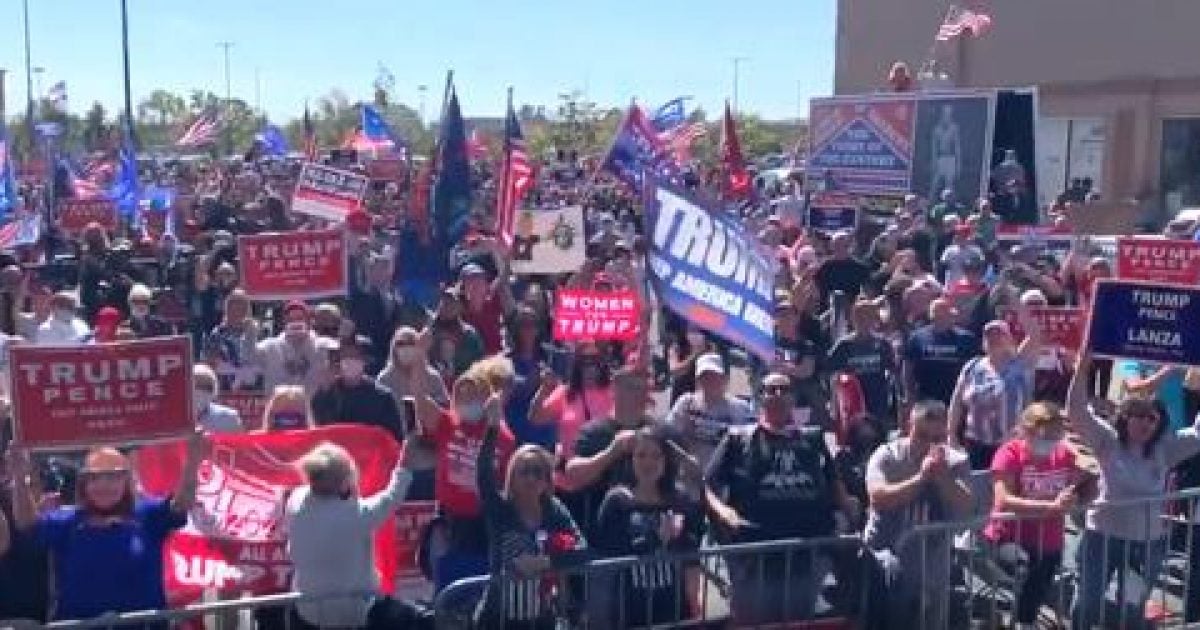 Knowing that President Donald Trump is unable to leave Walter Reed Medical Center in Bethesda, Maryland, where he’s currently being treated for the coronavirus, the president’s supporters decided to bring the rally to him.

On Saturday, droves of Trump supporters gathered outside the hospital to show love to the president by praying for him and even singing some melodies for him as well.

And unlike the violent Black Lives Matter and Antifa extremists known to attack innocent people and burn down businesses whenever they gather in groups, the crowds that gathered outside Walter Reed actually behaved peacefully.

And loving. Very loving, in fact, and all while staying in harmony.

Below is footage of the crowds singing “God Bless America”:

Below is footage of the crowds chanting “get well soon”:

Below is footage of the crowds chanting “we love Trump”:

Below are photos from the day-long event. Take note of the diversity of races:

Some of those gathered outside Walter Reed pic.twitter.com/fhGEcu4vG3

Few more pics of those gathered to support @realDonaldTrump pic.twitter.com/iwy3WEK9X5

I think this is my last shot of the scene outside Walter Reed. Have a great evening. pic.twitter.com/vhPphxsNXz

“Silent no more!” This woman shouted while driving by. pic.twitter.com/JlFkoxnzUN

Interesting: hundreds of people gathered over hours at Walter Reed for President @realDonaldTrump and zero looting, no arson and no one was shot. #DemsRViolent pic.twitter.com/c3MBUWIAof

Hateful far-left protesters also showed up outside the hospital to explain that “we don’t care how [the president’s] feeling,” flick their middle fingers at Trump supporters, sing and dance “f–k Donald Trump” and wish death on the president.

Biden supporter outside Walter Reed as the President is hospitalized: “We don’t care how he’s feeling” pic.twitter.com/f3lcODeHwb

This otherwise attractive couple flipped everyone off as they ran by. To give an idea of the typical local response to Trump in elite Bethesda, Maryland. pic.twitter.com/NOUCYI5qsw

Freedom of speech yes. None the less they are miserable, disgraceful and deranged. Sad. pic.twitter.com/Baoz0ucFkU

An Antifa girl showed up to Walter Reed and is chanting “Wah wah your leader’s gonna die” from across the street pic.twitter.com/6Z3Vq66xLz

This lady came across, confronted, and cussed out children. Caught the tail end of it. pic.twitter.com/NWyPyHTwab

“Wah, wah, your leader’s gonna die!” one of the far-left protesters mockingly sang.

Updates from Physician to the President Sean Conley suggest the president will be just fine.

“President Trump continues to do well, having made substantial progress since diagnosis. This evening he completed his second does of Remdesivir without complication. He remains fever-free and off supplemental oxygen with a saturation level between 96 and 98% all day,” Conley said in a statement late Saturday.

“He spent most of the afternoon conducting business, and has been up and moving about the medical suite without difficulty. While not yet out of the woods, the team remains cautiously optimistic.”

The guy’s a machine. @realDonaldTrump getting work in at Walter Reed. 🇺🇸 pic.twitter.com/yX1eeUqt7h

And the president even took the time to record a video that showed him looking, speaking and breathing just fine, though he looked just a little worn out, naturally.

He followed that late-night tweet up with one posted early Saturday morning in which he thanked the supporters who’d rallied outside Walter Reed.

Thank you so much! https://t.co/UL6P5lRjZI

Of course, his supporters didn’t just rally in Bethesda.

“A caravan of cars held a rolling rally in support of President Trump Saturday. The parade from Plymouth to Nashua, N.H. was in support of the president’s re-election. Hundreds of cars participated, and cars were decorated with American flags, Make American Great Again signs, and Trump 2020 posters,” Boston station WBZ reported.

See scenes from the “rolling rally” below:

A Vietnamese family decking out their van with Trump posters and flags. Apparently there’s a contest to see who has the most swagged out car.

Rally goers say they’re not here to change people’s views—just to voice their support for the President. #WBZ pic.twitter.com/glBGnHbNrV

A much larger crowd at the #Lexington service station. I’m told there are more cars than expected, so they’re moving the #Trump2020 rally to a Londonderry, NH flee market. #WBZ pic.twitter.com/LiFjTmknDF

Wow! About 200 vehicles so far and we haven’t even arrived at the Braintree stop yet. Amazing support for @realDonaldTrump! For 3.5 years he’s fought for us, so we’re going to fight for him in these last 31 days. Rally is rolling! All aboard the Trump Victory Train! pic.twitter.com/O4486a5au2

The Trump love is real. But alas, so is the anti-Trump hate …