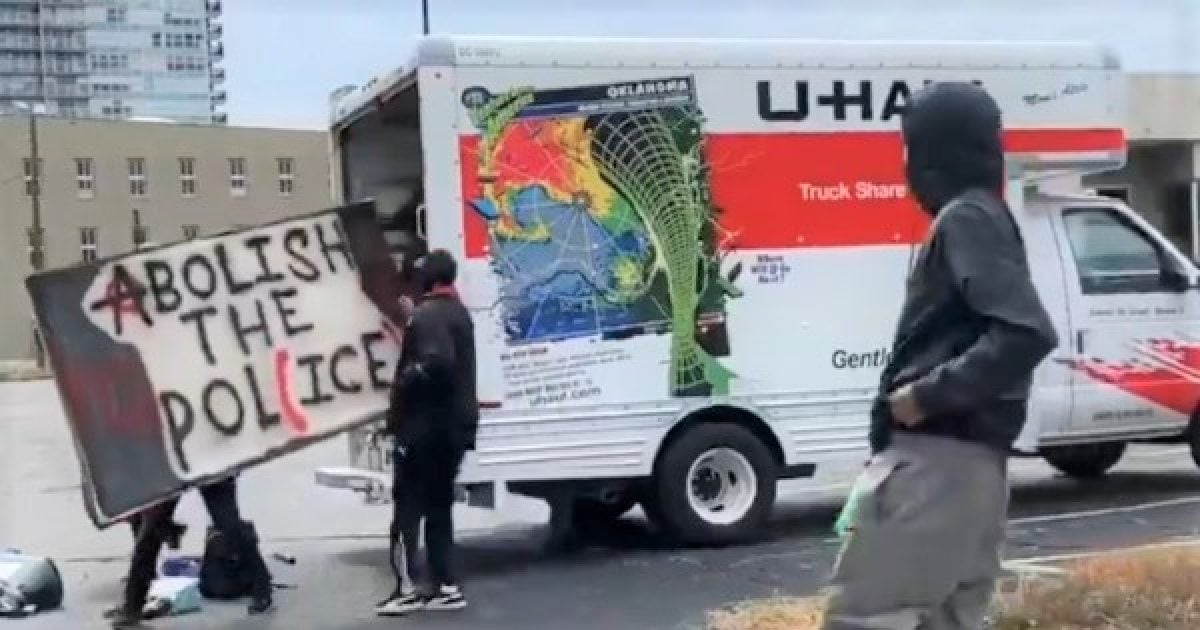 Almost immediately after the grand-jury announcement, protesters swarmed a U-Haul truck in a parking lot and took out riot gear, weapons, gas masks, and anti-police signs to use during clashes with police.

Multiple media outlets posted videos on Twitter, with many users commenting that the activists had prepared to protest no matter what happened.

The presence of the fully-stocked U-Haul truck caused many Twitter users to wonder who’s bankrolling these nationwide protests, which appear to be highly organized and very well-funded — and not the organic protests of citizens reacting to a news announcement.

Multiple journalists outed Holly Zoller, a board member of a Louisville Bail Project, as the person who allegedly rented the U-Haul and supplied the riot gear to protesters.

Bail project organizer Holly Zoller, board member of Louisville's "Books to Prisoners", delivered riot equipment in a U-Haul ahead of tonight's violence. pic.twitter.com/7RTh6Fu8JE

Holly Zoller later appeared to confirm that she had rented the U-Haul truck in an undercover phone call published by The Gateway Pundit.

A U-Haul employee leaked call logs, showing that it was barraged with complaints about the U-Haul truck supplying riot gear to protesters.

The Bail Project claims to have bailed out 12,096 prisoners to date. According to her bio, Zoller “has organized around anti-fascist movements.” In other words, Zoller admits to being a supporter or member of Antifa.

Mattingly said they reacted appropriately and did nothing wrong when they fired back at Taylor’s boyfriend after he shot at them first.

The officers were looking for a crack-cocaine dealer who allegedly lived in Taylor’s apartment complex. The media had reported for months that the police had conducted a “no-knock warrant.” However, witness testimony said the officers had banged on Taylor’s door before entering.

Breonna’s boyfriend, Kenneth Walker, has also admitted that he shot at cops first. The police then returned fire, with Taylor being a casualty.

Brett Hankison, one of the three cops involved in the shooting death, was quickly fired and has since been indicted on three counts of “wanton endangerment.”

Daily Wire journalist Matt Walsh has repeatedly warned that the mainstream media are promoting a dangerous, false narrative about that fateful night.

“Everything you’re hearing about Breonna Taylor is a lie. It was not a no-knock warrant. They did announce. The boyfriend fired first. And by the way, Breonna was apparently involved in her ex-boyfriend’s drug enterprise. All of this info has been publicly available for weeks.”

Everything you’re hearing about Breonna Taylor is a lie. It was not a no knock warrant. They did announce. The boyfriend fired first. And by the way, Breonna was apparently involved in her ex boyfriend’s drug enterprise. All of this info has been publicly available for weeks.

“The ex-boyfriend said in jailhouse phone calls that Taylor was handling his cash and had thousands of dollars in drug money in her apartment.”

“Narrative: Breonna Taylor was murdered in her sleep when cops bust in the door without knocking.

Reality: Nope. She was awake, the cops did knock and announce themselves, and her boyfriend shot first.”

BLM Narrative vs Reality: A Thread

Narrative: Breonna Taylor was murdered in her sleep when cops bust in the door without knocking.

Reality: Nope. She was awake, the cops did knock and announce themselves, and her boyfriend shot first.