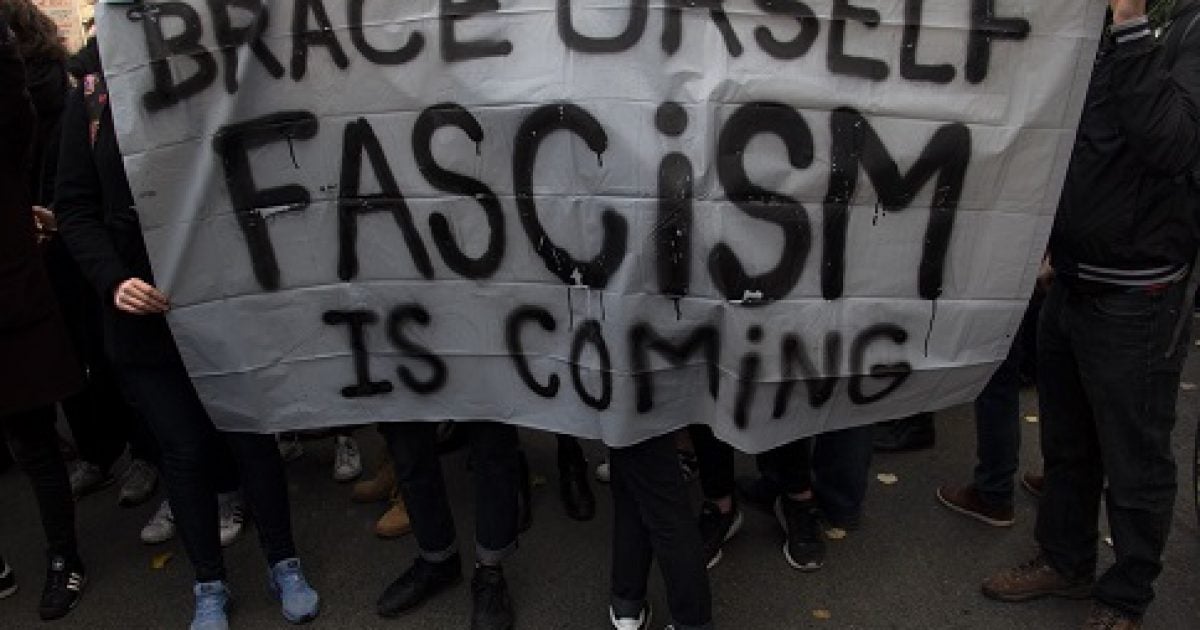 The fascist left regularly typifies the very qualities it professes to abhor. The only thing more pronounced than its totalitarianism is its stunning lack of self-awareness.

It’s ironic that leftists think of themselves as liberals, as the term “liberal” is historically and etymologically connected to the concept of liberty. Not only are they merely selective champions of liberty but the logical extension of their agenda is an eradication of liberty, from socialism to Supreme Court legislation, from radical redistributions of income to oppressive pseudo-environmental regulations.

What do I mean by “selective champions of liberty”? Simply that they believe conservative ideas are so odious they must be excluded from the classroom; social media; university student organizations; and, in too many cases, restaurants, yard signs and baseball caps.

Try teaching intelligent design in many public schools. In the name of science, they’ll exclude ID’s scientific findings. They believe that conservatives and their ideas are inherently racist and sexist and, in many cases, lead to violence, which means conservatives are not entitled to First Amendment protection or free expression on social media. It’s scary how these leftists have blinded themselves to their own hypocrisy and fascism in trampling the same rights they purport to celebrate.

Invisible authoritarians running social media platforms cite arbitrary rules of conduct that conveniently censor conservative opinion to allegedly ensure decency and decorum. Yet the opinions they muzzle are only dangerous and indecent if you define danger as the free expression of opposing views. While prohibiting conservative views that don’t remotely advocate violence, they permit overt leftist calls for violence. The chilling process by which this “private” and sometimes-government-supported censorship occurs is that leftists subjectively determine conservative speech is offensive or hateful and must be banned.

The First Amendment free-speech guarantees were designed precisely to protect controversial political speech, as uncontroversial expression obviously needs no protection. In the not-too-distant past, liberals understood that protecting the expression of all ideas was the essence of liberty. Yesterday’s American Civil Liberties Union defended the rights of neo-Nazis to march through Skokie, Illinois, in 1978.

Examples of the tyrannical leftist mindset abound. Nicholas Sandmann’s admission to Transylvania University in Kentucky incensed certain leftists. They clearly loathe Sandmann, who was brutally slandered by CNN and other leftists when activists accosted him for simply wearing a MAGA hat and standing for the pro-life cause.

“Does anyone else think it’s a bit of a stain on Transylvania University for accepting Nick Sandmann? I’m sure it’s a ‘both sides’ defense, but it’s pretty counter to their mission and another instance of there not being equal sides to an issue,” wrote ACLU staffer Samuel Crankshaw on Facebook. “This kid clearly is a provocateur in training with no intention of learning. He exists only to troll, intimidate and play victim.”

“Counter to their mission”? What mission would that be: the promulgation of leftist propaganda and the suppression of opposing ideas? Note Crankshaw’s revealing admission that he doesn’t believe there are even two sides to the Sandmann controversy. This is more remarkable considering that the media’s original reporting of this event was debunked at the time and then more resoundingly discredited when Sandmann settled a major defamation suit against CNN and others.

Despite Sandmann’s vindication, this ranting ACLU ideologue can’t even acknowledge that Sandmann had a legitimate position. And without knowing Sandmann personally, Crankshaw presumes he has no intention of learning — leftist open-mindedness on parade.

Crankshaw isn’t alone. Transylvania University professor Avery Tompkins, who paradoxically identifies as a “diversity scholar,” went further. “If (Sandmann) were to cause problems by being disruptive, trolling, or engaging in unethical behavior of any kind, I would immediately document it … and he would just be putting himself in a position for me to file a conduct report,” commented Tompkins on Crankshaw’s Facebook page.

This unmistakably reads like a threat against Sandmann should he express his views. If that weren’t sickening enough, Tompkins’ claims are preposterous. Sandmann wasn’t disruptive at the pro-life march. He trolled no one; a Native American man approached and taunted him, obnoxiously banging a drum in his face. Nor did Sandmann behave unethically, unless, perhaps, you believe that gathering in support of innocent unborn babies is unethical.

Tompkins’ thinking is disturbing (though I would still defend his freedom to express this stupidity), as is his attempted intimidation of a student entering his university. It’s rich that on the university website, Tompkins is quoted as saying: “I don’t want to be the authoritative person in the classroom. … The classes are there for the students. It’s not my soapbox.” Hmm. Could have fooled this casual observer.

Tompkins’ later apology in which he paid lip service to “diversity” is laughable. He is an adult with fully formed ideas, and a poster child for illustrating that the left’s idea of “diversity” means anything but ideological diversity.

Another example involved leftist University of Rhode Island professor Erik Loomis, who defended an anarchist’s murder of Trump supporter Aaron Danielson in Portland. “He killed a fascist,” Loomis said. “I see nothing wrong with it, at least from a moral perspective.” This abomination speaks for itself.

Before you call this an extreme example, note that this kind of thinking drives the widespread leftist violence throughout American cities that was enabled by Democratic governors and mayors.

I wouldn’t be so alarmed about any of this if the left weren’t promising to ratchet up its violence if President Donald Trump is reelected. If you doubt this, you’re not paying attention, and as young people say, “That’s on you.” Prayers and more prayers for this great nation.