Is addiction a progressive, incurable brain disease or is it a habit? Is substance use always voluntary or is there a line heavy substance users cross where they are no longer able to stop? While the brain disease theory of addiction has never been supported by research, all treatment programs in our country are based on it; billions of dollars are spent to fight it; laws have been enacted in an effort to protect people from it; and schools have special programs educating children to try to keep them safe from getting it. Yet, based on the ever increasing numbers of heavy users and accidental overdoses, the problem is clearly getting worse.

More than twenty years ago (1997), the head of the National Institute on Drug Abuse (NIDA), Alan Leshner, declared addiction a brain disease in a seminal paper and statement titled “Addiction is a brain disease, and it matters.” It was quickly picked up and celebrated by the media, and has dominated the discourse on addiction ever since. Unfortunately, the scientific substance to support the paper was entirely lacking.

Leshner made a case for the brain disease using the following: 1. Calling addiction a disease is the more compassionate, enlightened view so he argued it would decrease stigma and open the door for more people to seek help; and 2. A lot of neuroscience jargon, such as talk about the midbrain, prefrontal cortex, mesolimbic reward system, neurotransmitters, metabolic activity, and more. With all the fancy language used by researchers he cited, their arguments are incomplete, rest on a number of shaky premises, and defy well-established facts from other branches of science, such as epidemiology and behavioral research.

In spite of the lack of actual scientific evidence in his paper funding for addiction research and addiction treatment exploded, and treatment based on the brain disease model became the only mode of help available. Since 1997 funding for addiction treatment has risen to an astounding $36B from $9B. While more people than ever before are getting addiction treatment, relapse rates are estimated to be as high as 80% within the first month of leaving a treatment program, and increase as a function of time post treatment. You would think that with this enlightened view of addiction the death rates would be decreasing, but the opposite is true. According to the CDC drug overdose deaths have risen precipitously since 1999. 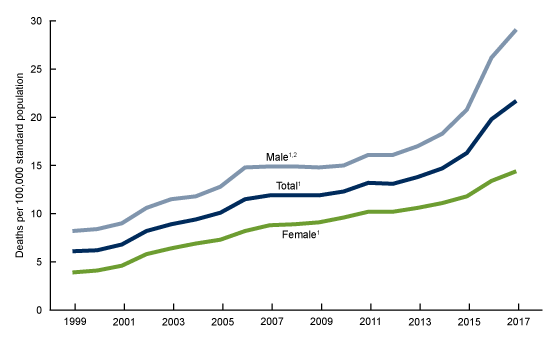 During 2018, nearly 70,000 people died in the US due to drug overdose, and that number is expected to rise significantly in 2020 in part due to the pandemic lockdowns around the country.

So why isn’t treatment working? Perhaps it’s because addiction isn’t actually disease at all. Addiction is a habitual behavior, and based on the research substance use is always voluntary. And when you think about it, you know this to be true because 1 in 4 people have fit the criteria for substance use disorder (SUD) at some point in their lives, and the vast majority get over it without treatment. Statistically speaking, if that person isn’t you, you likely know someone who has stopped an addiction.

The idea that drinking a beer, doing a line of cocaine, shooting up heroin, taking a pill, or smoking a cigarette is done involuntarily is completely illogical. People don’t get addicted to doing things they don’t like or want to do, and no one takes a drink or drug without wanting to do it. If it was truly involuntary, then anyone who ever became addicted, would never stop using, for any reason. They wouldn’t be able to, but all people stop at some point for their own reasons.

The key to helping people to solve an addiction is not to try to force them to stop through fear-mongering, lies, and ultimatums, which is the American addiction treatment model. The way to help people is to first acknowledge that they are not sick and powerless, but have developed a habit based on a strong preference for the substance and the activity of using it. People develop heavy substance use habits because they believe they need their preferred substance to achieve a level of happiness in life they don’t believe they can get anywhere else. Once they realize they are not powerless victims, they learn to move past their addictions like millions have before them. Mark Scheeren
Mark Scheeren is the co-author of The Freedom Model for Addictions, Escape the Treatment and Recovery Trap.