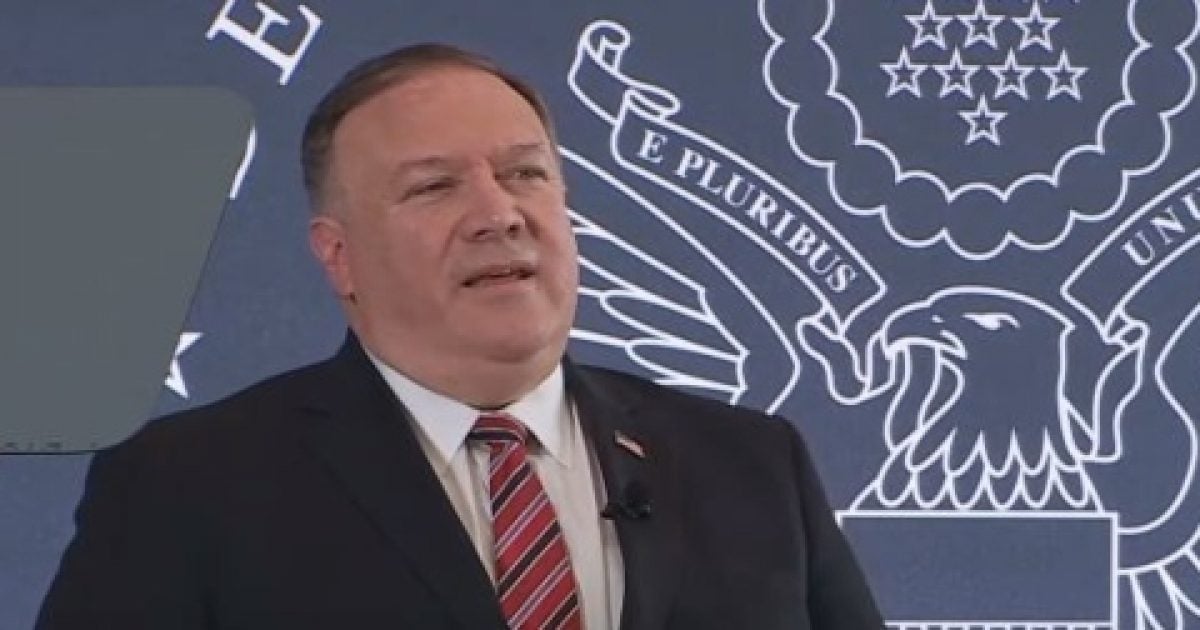 Secretary of State Mike Pompeo condemned the “slander” of America and suggested that the Chinese Communist Party must be “gleeful” to see the media “spout their ideology.”

During Pompeo’s remarks, made during a speech Thursday at the National Constitution Center in Philadelphia, he took aim directly at the New York Times’ controversial “1619 Project” as he warned that America’s founding ideals are under attack.

The @NYTimes’s 1619 Project wants you to believe our country was founded for human bondage. What a dark vision of America’s birth. What a disturbed reading of history. What a slander on our great people. pic.twitter.com/s24rA3C3m8

“Yet today the very core of what it means to be an American, indeed the American way of life itself, under attack,” Pompeo said as he spoke about human rights and addressed the State Department’s report from the Commission on Unalienable Rights.

“Instead of seeking to improve America, too many leading voices promulgate hatred of our founding principles,” he said, in a reference to weeks of protests and riots across the nation in the wake of George Floyd’s death. Demonstrations against police brutality quickly turned to issues of racism and the eventual attack on America’s history by protesters demanding the removal of many statues and monuments.

In the context of those remarks, Pompeo called out the “1619 Project,” which The New York Times explains “aims to reframe the country’s history by placing the consequences of slavery and the contributions of black Americans at the very center of our national narrative.”

“The New York Times’ 1619 project, so named for the year the first slaves were transported to America, wants you to believe that our country was founded for human bondage,” Pompeo said.

“The Chinese Communist Party must be gleeful when they see the New York Times spout this ideology,” the secretary of state said.

New York Times journalist and creator of “The 1619 Project,” Nikole Hannah-Jones, defended the effort to smear America as a racist country as “patriotic” last year. She claimed in an interview with CBS News at the time that the ideals in Thomas Jefferson’s writing of the Declaration of Independence “were not true when they were written” but that black Americans “have fought to make those ideals real.”

Curricula based on the narrative was set to make its way into America’s classrooms and it is currently being adapted for film and TV with Oprah Winfrey, despite criticism from those who have slammed the project as propaganda.

Hannah-Jones, who once referred to the “white race” as “barbaric devils,” reacted to Pompeo’s remarks on Twitter, posting a simple, “What a time.”

Pompeo warned in his speech Thursday that “some people have taken these false doctrines to heart.”

“The rioters pulling down statues thus see nothing wrong with desecrating monuments to those who fought for unalienable rights — from our founding to the present day,” he said.

“This is a dark vision of America’s birth. I reject it. It is a disturbed reading of history. It is a slander on our great people. Nothing could be further from the truth.”

Pompeo addressed the role of human rights in American foreign policy during his speech on a draft report by the Commission which was chaired by Harvard Law School professor and former U.S. ambassador to the Holy See Mary Ann Glendon.

Formed in 2019, the commission, “composed of academics, philosophers, and activists,” was tasked with providing Pompeo with “advice on human rights grounded in our nation’s founding principles and the principles of the 1948 Universal Declaration of Human Rights.”

“The commission was never intended to time the release of this report to the current societal upheavals that are currently roiling our nation,” Pompeo said in his speech. “Nevertheless, the report touches on this moment, and so will I, because today’s unrest directly ties to our ability to put our founding principles at the core of what we do as Americans and as diplomats all across the world.”

“The Declaration of Independence itself is the most important statement of human rights ever written. It made human freedom and human equality our nation’s central ideas,” Pompeo said. “We agree that America draws strength and goodness from her founding ideals, and that our foreign policy must be grounded by those ideals as well.”