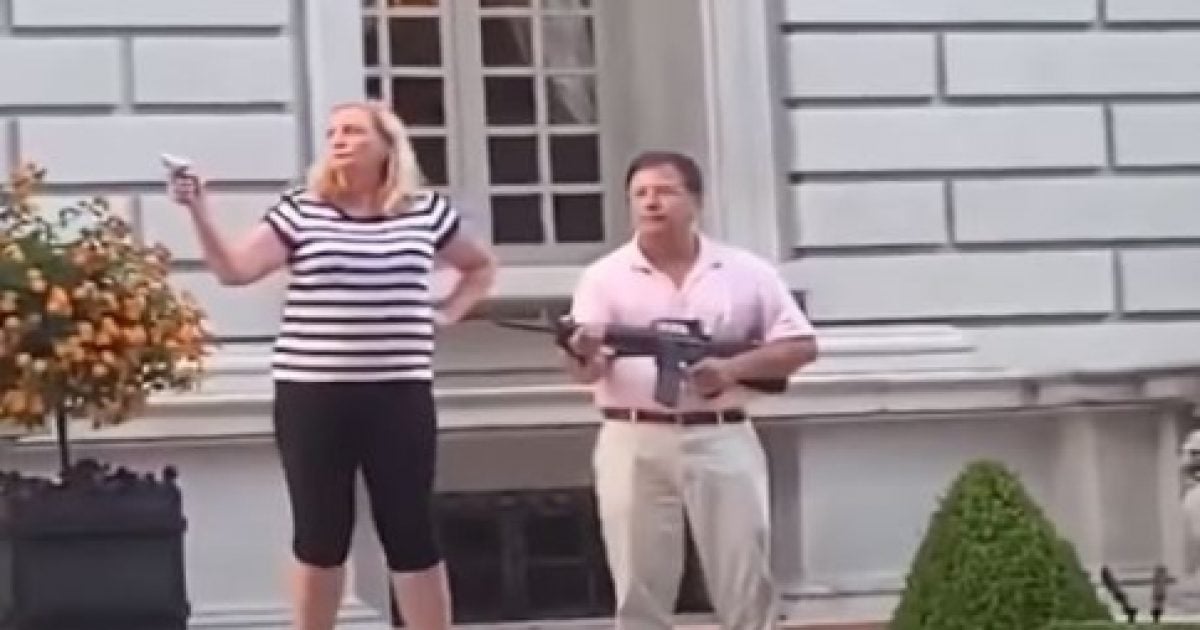 The St. Louis couple who defended their home from Black Lives Matter protesters is now facing the condemnation of neighbors.

More than two dozen of Mark and Patricia McCloskey’s neighbors wanted to be clear they did not support the weapons-carrying couple who gained attention in a widely-seen video defending their home from protesters who broke through a gate to enter the private neighborhood on Sunday. A letter was released from residents of Westmoreland Place on Wednesday condemning the “horrific event” and the actions of the Central West End couple, according to KMOV.

“Westmoreland Place and its adjoining street Portland Place are a historic neighborhood within the City of St. Louis, Missouri,” the letter signed by 38 neighbors read.

“From many walks of life, people choose to make this neighborhood home for many reasons, including the sincerity, empathy and neighborliness exhibited by the vast majority of those who live here,” the letter continued.

2 dozen neighbors sign letter saying couple who drew weapons against protesters in private StL neighborhood say the couple does not speak for them; they object to violent response@FOX2now @KPLR11 pic.twitter.com/p7TZ2Nfl3k

“Some of us choose to speak up following the horrific event that transpired on Sunday evening near our homes. As the undersigned, we condemn the behavior of anyone who uses threats of violence, especially through the brandishing of firearms, to disrupt peaceful protest, whether it be in this neighborhood or anywhere in the United States,” the McCloskeys’ neighbors wrote.

“As residents of Westmoreland Place,” the letter concluded, “we seek positive action and constructive dialogue that builds and maintains a civil and good society.”

The couple was not only misrepresented by the liberal media in original reports on the incident, but they have also allegedly received death threats and have had no success in getting local law enforcement or city officials to weigh in or provide protection.

Fox News host Tucker Carlson called attention to their plight on his show Thursday, revealing that an attack on them is planned for the weekend and they have been unable to secure any protection or help.

Tucker details horrifying aftermath of St. Louis couple under siege, RIPS GOP Gov for doing nothing to stop it https://t.co/EIqCw5LXMq

Carlson noted that Republican Gov. Mike Parson, himself a former sheriff, has not reached out to the couple even though he could send state troopers out to their home to offer some protection.

“Parson hasn’t even picked up the phone to speak to them. He doesn’t care. Obviously nobody cares,” Carlson said.

The St. Louis police are reportedly investigating if the protesters can be charged with fourth-degree assault by intimidation or trespassing for breaking into the gated community. A Change.org petition calling for the couple to be disbarred has reached over 41,000 signatures.

Apparently the neighbors in the private community who are upset about threats of violence have not sent any kind of letter of admonishment to the “peaceful” protesters. Twitter users slammed the neighboring homeowners for being “cowards” against the mob and for claiming there was a “violent response.”

I noticed that nobody else in that neighborhood welcomed in the protesters.

A lot of y’all need to look up the definition of violent.

What was the violent response?

This is just a “please don’t burn down our homes” hostage type letter… nothing more.

Send the protesters to the signees’ houses.

Those neighbors are simply telling criminals they will not defend their home with lethal force, on a national stage.

So glad I don’t have the money or desire to live in such a disloyal, spineless, maybe-you’ll-kill-me last neighborhood.