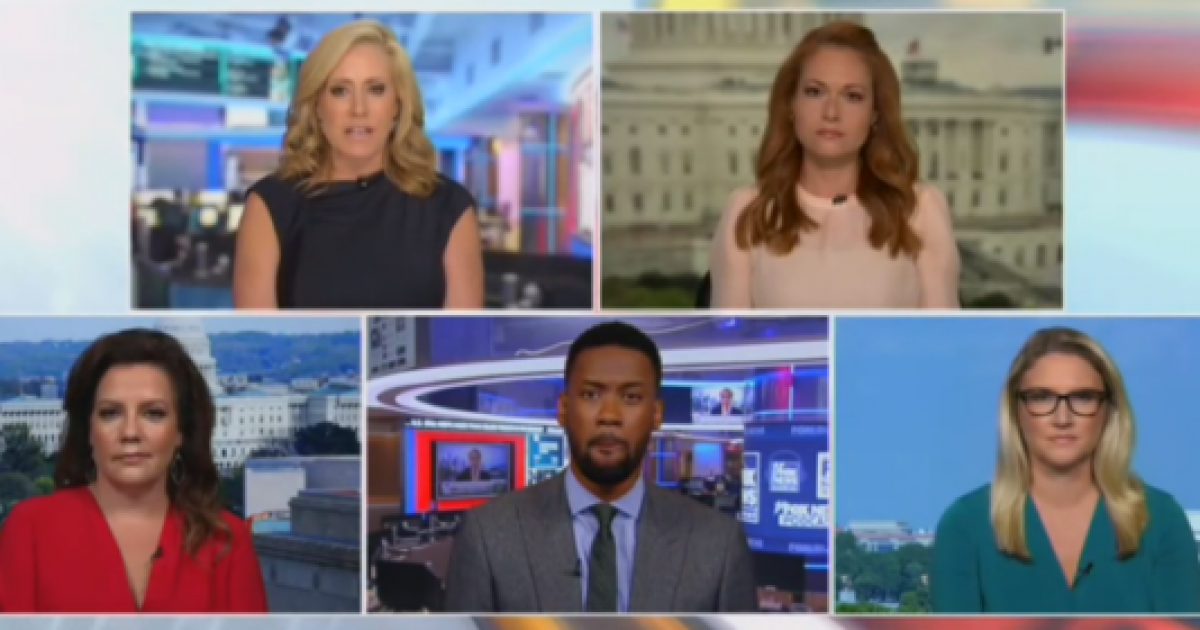 Former Obama administration official turned Fox News commentator Marie Harf opined Thursday that the toppling of Confederate statues by left-wing extremists is equivalent to the toppling of Saddam Hussein’s statue after the invasion of Iraq.

This annoyed conservative commentator Mollie Hemingway, who fired back by wrongly accusing her of having compared Saddam Hussein to George Washington.

This point was invalid and rightly spurred Harf’s anger. However, Hemingway’s larger point — that Harf is siding with the same extremists who’ve also called for toppling the statues of George Washington and Abraham Lincoln — was 100 percent accurate.

Watch Harf’s initial statement below via FNC’s “Outnumbered“: (Read on for fireworks)

“These communities need to do a process, need to look at these Confederate statues and you know … one of the first things the United States military did when we invaded Iraq was, along with Iraqis, tear down statues of Saddam Hussein, because while they were only symbols, they were symbols of oppression,” she said.

“They were symbols of a leader who had killed so many of his own people, had imprisoned them, had tortured them. And so symbols really do matter, and I think that if we have a process to look particularly at the Confederate generals and leaders.”

“People who tear down Ulysses S. Grant statues or abolitionist statues are stupid and are not part of this broader conversation, and are only trying to hijack it for their own purposes,” she added.

Notice how she said that only those who tear down the statues of Civil War heroes like Ulysses S. Grant or abolitionists are “stupid.”

After her remarks, the discussion continued for some time between different people, til about 45 minutes into the show, when Hemingway was offered the mic and used it to argue that Harf’s rhetoric matched that of BLM extremist Hawk Newsome.

Speaking on Fox News’ “The Story” the night before, Newsome, a self-identified BLM leader, had warned that his crew is ready to “burn down this system.”

Listen to Hemingway below:

“I actually just want to applaud this individual [Hawk] for being honest about his aims,” she said. “He made a comparison that Marie Harf also made during this show that sometimes you need to do violent revolution to overthrow things you don’t like. You know, comparing George Washington to Saddam Hussein.”

“Hang on, let her finish,” show moderator Melissa Francis then cut in.

“Well, I didn’t make that comparison. I’m not going to let her say it,” Harf replied, prompting Francis to raise her voice and demand she let Hemingway finish.

Hemingway then concluded her remarks by addressing her core point.

“The claim is that it’s OK to tear down statues, which this week have included George Washington and Abraham Lincoln … because it’s just like what we did when we did a regime-change war in Iraq, where we helped people tear down statues of Saddam Hussein. I’m just making the point that that’s what this individual’s saying as well.”

“He’s saying that this a corrupt and systemically evil and racist country and that there needs to be a destruction of our constitutional system of government to accomplish his political aims. That’s actually what Black Lives Matter has been saying the whole time, and it’s why the group’s not universally loved outside of corporations and mainstream media — because of these things that they said.”

Her description of BLM was 100 percent accurate.

Nevertheless, it provoked outrage from Harf.

“I’m sorry. That is completely unacceptable and inappropriate, and it’s not what I did, and shame on you for saying that.”

“Thank you for your clarification,” Hemingway replied as one of her other colleagues began speaking in her defense.

The segment ended with Francis cutting off the conversation, saying, “We can’t devolve into a shouting fest here; let’s leave it there.”

As of Friday, the discussion had gone viral among left-wing media outlets that were eager to point out that Hemingway had been wrong about the George Washington comparison but were unwilling to note that she’d been dead right about BLM.