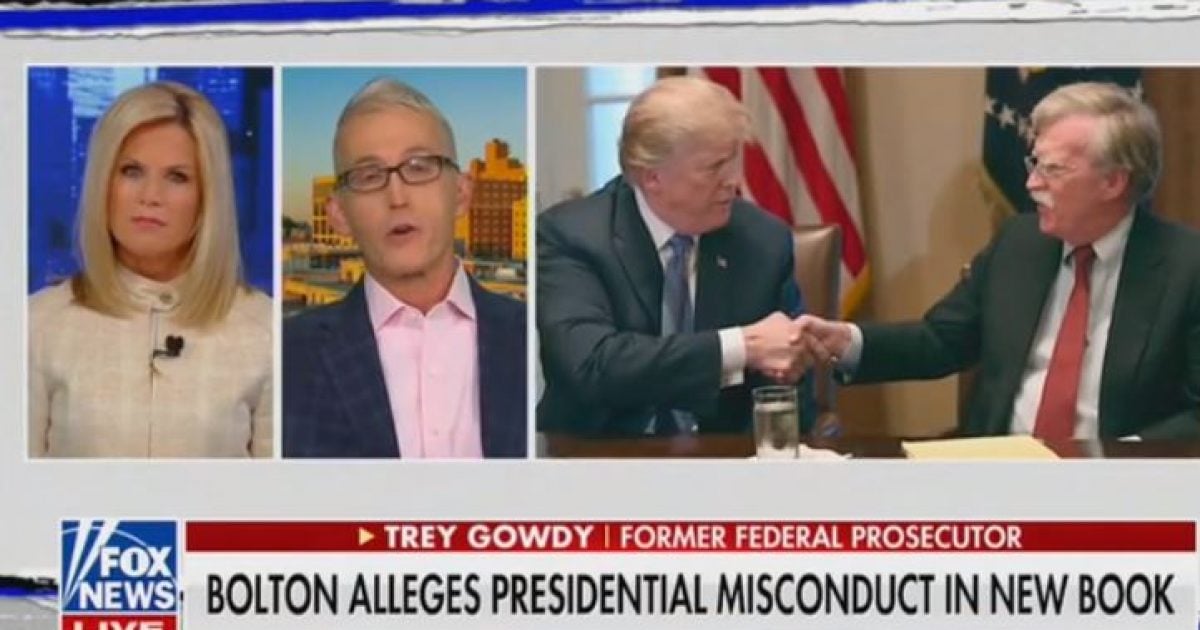 Dobbs’ opinion hasn’t changed from earlier this week when he described the ex-diplomat as a “foreign policy RINO” and a “tool for the radical Dems and the Deep State.”

Reports have previously suggested that Bolton wanted to get the country bogged down in another disastrous war in the Middle East and possibly other theaters, but fortunately, the president rejected Bolton’s advice.

In addition to short-term profits derived from the liberal book publishing industry, this policy disagreement may be the source of Bolton’s vendetta against Trump.

Among the allegations in the Bolton manuscript is a claim that Trump supposedly sought the help of China’s President Xi in his re-election effort. Eyewitness/earwitness Robert Lighthizer, the U.S. trade representative, denied Bolton’s explosive allegation, calling it “absolutely untrue.”

The U.S. Justice Department is suing Bolton to prevent the release of the tell-all on grounds that it reveals classified information but obviously some of the allegedly damaging material is already being disseminated by a compliant corporate media.

President Trump himself weighed in about the “clueless” Bolton on Twitter.

At times, Trump has used Fox News as a hiring hall for his administration, and in this case, it obviously didn’t work out.

Last night on his Fox Business Channel show “Lou Dobbs Tonight,” the host castigated Bolton for encouraging, after the fact, “a sham impeachment” about things he doesn’t even know about and then turned it over to former Congressman Jason Chaffetz.

Bolton’s “literary masterpiece” is an ongoing act of betrayal against the president he served, Dobbs observed, by claiming various additional allegations should have been probed by the Democrats in their sham impeachment inquiry.

In addition to apparently trying to cash in on anti-Trump sentiment in some precincts, Chaffetz suggested that Bolton may have been a Trump official who was leaking classified information from the White House.

“I’m terribly disappointed in John Bolton. He was supposed to be the career professional who could come in there as an adult and be the national security adviser. but I’ve got to tell you, the antics and the ranting and raving that he’s doing in trying to publish this book to line his own pockets at the expense of national security: That’s just not acceptable…”

“It’s amazing how John Bolton leaves, and now we have the very competent Robert O’Brien as the national security adviser, and guess what? We don’t have the same type of leaking that we did when John Bolton was the national security adviser. Remember all those calls that were going out the door, the information that was going out to these media sources? The New York Times now has more Bolton information. Maybe we’re looking at the source of those, at least something they should look at in terms of the leaking.”

“It’s an excellent point. and Bolton has a lot to answer for, and the list gets longer every day. He is an extraordinary, extraordinarily disappointing, petty, and vindictive person. It’s sad to see what perhaps he always was, but certainly what he has become,” Dobbs concluded.

Fortunately or unfortunately, the Trump presidency has exposed some in the GOP establishment who are just grifters in it for themselves.

Trey Gowdy, another former GOP congressman, also blasted Bolton’s opportunism and unwillingness to subject himself to going under oath in a discussion with Martha MacCallum on FNC’s “The Story.”

“He ain’t being cross-examined, he’s sitting in his pajamas pecking away on his iPad. The power of cross-examination is you actually have to withstand the cauldron, I mean, withstand the heat of being questioned on it, I mean anybody can write a book and make assertions. Can you answer questions under cross-examination from the House or the Senate? Apparently he couldn’t, ’cause he didn’t.”